ST. LOUIS, MO — About one hundred protesters gathered in downtown St. Louis today outside of the Peabody Coal corporate headquarters. St. Louis locals were joined by Navajo residents from Black Mesa, Ariz., Appalachians from coal-burdened West Virginia, and supporters from across the United States to demand the cessation of strip mining and accountability for land and people.
Navajo residents of Black Mesa, Don Yellowman and Fern Benally, demanded to speak with Peabody CEO Greg H. Boyce and deliver a letter detailing their concerns.   (Read it here.)
Around 10 protesters were arrested for linking arms and refusing to leave Peabody property when Boyce refused to meet with Navajo representatives.  Protesters included representatives from Missourians Organizing for Reform and Empowerment, Radical Action for Mountain People’s Survival, Black Mesa Indigenous Support, Veterans for Peace, SEIU and other labor unions.
Activists dropped banners from two nearby buildings reading, “Stop the War on Mother Earth.  Peabody: Bad for St. Louis, Bad for the Planet” and “Peabody Kills.”
According to eye witnesses, the police used pain compliance pressure points, and the twisting of heads, as they arrested them.

One arrested member of Veterans for Peace was handcuffed, walking compliantly with police and was suddenly thrown to the ground by the police.
The rest of the protesters, upset by Peabody's unresponsiveness and the police violence, took the march into the streets of St. Louis with a banner reading, "St. Louis! Stop Subsidizing the Climate Crisis".  After marching through the streets, the protest returned to Peabody Headquarters and disbursed.
Peabody, the largest coal company in the U.S., operates massive strip mines on Black Mesa, Ariz., ancestral homelands of the Navajo people. Tens of thousands of Navajo families have been forcibly relocated in order to clear the land for Peabody’s strip mines; this constitutes the largest forced relocation of indigenous peoples in the U.S since the Trail of Tears. To this day, Navajo and Hopi people are engaged in resistance to the forced relocation and mining practices threaten the land and livelihood of future generations. 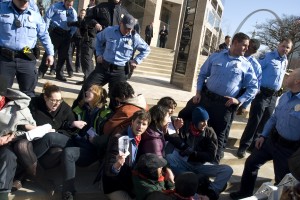 In nearly 45 years of operation, Peabody’s mines on Black Mesa have been the source of over 325 million tons of carbon dioxide discharged into the atmosphere#. The strip mines have damaged countless graves, sacred sites, and homes. 70 percent of a once-pristine desert aquifer has been drained for coal operations. The remaining groundwater is polluted, causing devastation to a once-flourishing ecosystem.
“The mine affects lots of ways of life. It’s destroying the places that have names. Everywhere you go here, every place has a name: names I learned from my grandparents, names that have existed for hundreds of years.  A lot of those places and knowledge of those places and cultural values are being destroyed by the mine. It’s destroying our way of life,” says Gerold Blackrock, a resident of Black Mesa.
Peabody’s strip mines harm the health of communities wherever they operate, from Black Mesa to Appalachia. Appalachian miners’ hard-earned healthcare benefits and pensions are threatened by Peabody’s business practices. “Peabody and Arch dumped their obligations to retired miners into Patriot.  This was a calculated decision to cheat people out of their pensions,” said retired United Mine Workers of America miner Terry Steele.
“Enabled by the City of St. Louis, Peabody’s corporate executives hide out in their downtown office building, removed from the destruction they cause in communities across the nation,” said Dan Cohn, St. Louis resident.  In 2010, the Board of Aldermen, in conjunction with the St. Louis Development Corporation, gave Peabody a $61 million tax break, including $2 million that was designated for the St. Louis City Public Schools.
“Peabody’s everyday business contributed to this summer’s triple-digit heat waves and historic drought. St. Louis residents are here today to stand in solidarity with the other communities that Peabody impacts and demand that our city stops subsidizing the unjust relocation of indigenous people and climate change. We need our taxpayer development dollars to be invested in green jobs, not corporations who have no regard for human life,” Reggie Rounds, a MORE member, said.
MORE is currently collecting signatures for a ballot initiative that would force the city of St. Louis to divest public money from fossil fuel corporations and switch over incentives to renewable energy and sustainability initiatives. The St. Louis Sustainable Energy ballot initiative has gained the support of numerous local social and environmental groups, small businesses, and 6th Ward Alderperson candidate Michelle Witthaus, who was present at today’s protest.
Today’s action is part of a growing movement for indigenous self-determination, and against exploitative business practices that destroy communities and land.
Statements:
http://bit.ly/PBD-press-packet

Comments
The Black Mesa Weavers for Life and Land have been fighting Peabody Coal for several decades. I am so glad to see your coverage of the protest against Peabody Coal.
The weavers of Black Mesa have been fighting Peabody Coal for so long. They have been  fighting to protect their culture, weaving,sheep and way of life.
They have never been idle in their stand to protect their life ways.
Thank you again for your website.
For security reasons, I am not a member of facebook or twitter, so it is really important that you keep up your good work in bringing the news of what isn't covered in the media....
that has really been censored.
at January 25, 2013

Alaska's Big Village Network stands in solidarity with
Missourians Organizing for Reform and Empowerment, Radical Action for Mountain People’s Survival, Black Mesa Indigenous Support, Veterans for Peace, SEIU and retired mine workers, and labor unions. We get excited to see the Navajos marching with other great Americans. We are many, with long suffering memory. Hold the line!

Thanks for the report! Hope to see follow up!

John Prine wrote and sang of this over 40 years ago in his song, "Paradise." What a shame that peoples' homes, lives and history are still being destroyed and hauled away.

I live on the other side of the Earth... still, I am outraged by the things "american people" have done to the native americans. I will repost this on my blog.
http://torden-acrossthestars.blogspot.ro/2013/01/censored-news-navajos-and-appalachians.html

Even I live half the Earth away, I am outraged. I reposted this on my blog.
http://torden-acrossthestars.blogspot.ro/2013/01/censored-news-navajos-and-appalachians.html