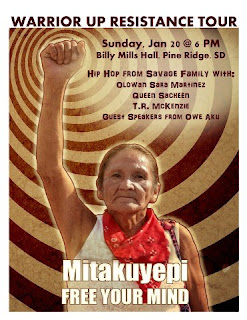 Warrior Up Resistance Tour
Jan 20, 2013 Billie Mills Hall
Pine Ridge, South Dakota, 6 pm
The Warrior Up Resistance Tour
Speakers and Musicians In Defense of Mother Earth
Who: Olowan Martinez – Lakota activist
Waziyatawin – Dakota scholar and activist
T.R. McKenzie – Deep Green Resistance and Latino Activist
Queen Sacheen- Coastal Salish Activist
Savage Family – Indigenous Hip Hop
Special Guest Speakers/Musicians
This tour will seek to bring knowledge to the people. It will tell the truth about this invader culture and its wholesale destruction of Mother Earth. In the end it will ask those in the audience if they will warrior up and fight back for Mother Earth. It will do this through speeches by people who are on the ground already fighting back and with Hip Hop music that promotes the same message.