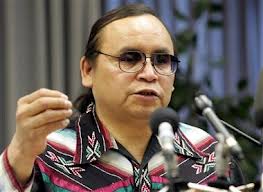 Chief, today is a great day for your people. You may not know it but you have made more impact than all the protests across Canada and any opposition comments made in the House of Commons yesterday. Now you are standing between the White Man and his money. HudBay Mining is a public company raising money based on international investor confidence in Canada's reputation as a safe place to invest. With your actions yesterday you have impacted the rate at which companies in Canada can raise money on the international market. You are going to be under a lot of pressure. The Winnipeg Free Press put your actions on the net and this will have big impact.
http://www.winnipegfreepress.com/breakingnews/Band-protesting-over-HudBay-Minerals-Lalor-mine--188695981.html
Your statement is absolutely brilliant.

In a prepared statement, Dumas said, "We totally reject HudBay’s Environmental Act License Application submitted for the Lalor mine without our consent. As the rightful owner, only we have the authority to approve a license to extract our resources from our territories."
There are over 60 metals and minerals mined in Canada and all are within a First Nation's traditional territory. If all First Nations in Canada issued the same statement as you and if they carried out the action you did, the Americans would be calling Harper immediately. The United States business community provides 72% of all foreign investment in Canada. Canada is an economic suburb of New York City. Toronto is going to be calling AFN National Chief Shawn Atleo  and Shawn will be calling you if this affects the rate the investors demand from investments in Canada.
HudBay does not only mine in Canada, it is a world wide mining company and is mining a lot in indigenous lands in South America. It has gotten in trouble in the past in several countries. What you did yesterday is important to all Canadian business that relies on investment confidence. Here is what the HudBay website has as it mission statement,
Hudbay is committed to producing strong investor returns and creating better futures for communities and employees by finding, building and operating successful mines.
When we blocked CN railway on January 16th near Portage La Prairie, they got an injunction and that court injunction gives us an opportunity to be heard in court as we fight the Title that CN claims to have in our Treaty territory. We don't expect to win in an immigrant court of law but we will leave on the court record our message to our children, our grandchildren and the future generations of our people. CN knows it, their title is the same category as the legal arguments made regarding Terra Nullius, the concept of "empty land", the same type of legal argument as Manifest Destiny and Papal Bull. The immigrants to our lands have been conditioned to believe that they provide all the money that First Nations live on. They are sadly mistaken and Manitobans especially have no clue that the northern First Nations territory sends billions of dollars a year south to subsidize the lifestyle of every one of those people who make hateful comments in the media about "lazy Indians living on the good graces of the Canadian taxpayer".
Terra nullius (pron.: /ˈtɛrə nʌˈlaɪ.əs/, plural terrae nullius) is a Latin expression deriving from Roman law meaning "land belonging to no one",[1] which is used in international law to describe territory which has never been subject to the sovereignty of any state, or over which any prior sovereign has expressly or implicitly relinquished sovereignty. Sovereignty over territory which is terra nullius may be acquired through occupation,[2] though in some cases doing so would violate an international law or treaty. Wikipedia
Canada is an exporting nation and Parliament better wake up to the fact that the indigenous people are getting international attention. Canada's image as a safe place to invest is taking a beating.  If your actions are carried out by all other First Nations in Canada, Business Canada is in serious trouble. Eighty-five percent of the natural resource base in Manitoba is in the north. The First Nations in the north send billions of dollars a year south but live in abject poverty. What you did yesterday sends a strong message to the ones that need to hear it, the rich people who invest in Canada, the one percent of Americans who make up the largest percentage of the foreign investment in Canada.
What you did yesterday takes Idle No More beyond round dancing, protests in the streets and now that the Theresa Spence issue is out of the media, this is what this movement needed. As I said in the 2007 National Day of Action, Standing between the White Man and his money. We know we can stand there because the White Man gets his money from our lands and our natural resource wealth. The immigrants have forgotten who lives on whose good graces. You just gave them a small slap on the face that may awake them to that fact.
I am attaching a letter I sent to Harper on the impact of Bill C45 on the Treaty. I am going after CN's title in court. If you need any position papers or treaty arguments that can help you in court, I will share my documents with you. I am also attaching Doug Bland's Ottawa Citizen article. Bland is over 70 years old and for years was the one who advised the Military leaders and RCMP. It is guys like Bland that understand that they need to tread softly when confronting First Nations, something the Judges and politicians may need to learn.
I met with Doug Bland and read his Book. He writes in his article

In the Canadian/First Nations context, Canada’s absolute economic dependence on natural resources (by some estimates equal to 30 per cent of the Canadian economy) and the inescapable vulnerability of the transportation infrastructure that moves these resources to the markets in Canada and the United States, gives the First Nations enormous new-found powers.
Chief, the $1.7 trillion GDP in Canada is dependent upon us. Immigrants make no payment for our resource wealth, the government has sucked the poor white people into believing that the First Nations are feeding off the taxpayer. They want to believe that but the government, industry and the Canadian Taxpayer Federation have known all along that they were lying to the people. This is why I am telling you, your actions have far greater consequences than we know today. They will come to you asking you to be "reasonable" I just love the Winnipeg Sun racist articles and editorials, it is making our people mad but it is actions like yours that make the difference. WE need our young people to document the racist comments made in the Canadian media, it will be a permanent marker on record. This is like Mississippi in the sixties, Canadians coming out with their racist attitudes. These beliefs and feelings were always there, now our people are waking up to the reality of what a lot of white Canada believes.