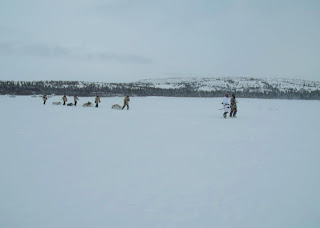 Good morning to all!

Our walkers are doing well and will be on the trail again today. It will still take them a few days to reach Chisasibi. They had to take the long way because the support team from Chisasibi has not yet reach them. Our walkers are located just east of Seal River, on the James Bay coast.
...
Chief Stanley George who went to bring them some supplies yesterday spent the night with them and will be back today. He will give us a first hand update on the Walkers later on today or this evening.

Thank you all for the tremendous support to the cause! Word is spreading worldwide about these seven Walkers and their mission, and its only been a just over a week since the launching of the Journey of Nishiiyuu.

MNN: WAR IS A RACKET

Mohawk Nation News
http://www.mohawknatinnews.com
WAR IS A RACKET!
MNN. Jan. 28, 2013. The cabal is meeting today in Ottawa. It is between the cooperative Corporate Indians and the economic royalists. Chief Crazy Horse said this just before he was assassinated: “How many times must the white man break his word? How short are your memories that you can again accept their promises? Why is today’s promises any different from those of yesterday?”


One of our great Warriors.

Pressure is on to steal our resources needed for war. The bankers are directing their CEO of the Corporation of Canada, Stephen Harper, to ramp up the extraction of war materials that the Indigenous people are living on. We never gave up any of it. The economic royalists are planning to split the blood money. The sub-corporations of Canada, known as band and tribal councils, are there to give the illusion of legality and to get a few crumbs for doing it.
Mark “Carnage” Carney, former Governor of the Bank of Canada, is heading to England with our $3 trillion Indian Trust Fund in tow to give to the economic royalists [bankers].

One of many whistle blowers

Nothing is new under the sun. US Major General Smedley Butler, in his famous 1933 speech, clearly laid out that “War Is a Racket”.
Major Butler, one of the most decorated generals of World War I, outlined how WW11 was planned. One year later, Butler gave secret testimony to the McCormack-Dickstin Committee [later the House Committee on Un-American Activities]. He told of a plot headed by a group of wealthy American businessmen [American Liberty League] to set up a fascist dictatorship in the US, complete with concentration camps for Jews and other undesirables.[ Full article: http://www.counterpunch.org/2011/12/02/wall-streets-failed-1934-coup/ ]
Butler was approached by Gerald T. MacGuire of Wall Street’s Grayson M-P, Murphy and Co. An army of 500,000 would be assembled of unemployed WW1 veterans to march on Washington DC to bring down the government. The plutocrats wanted Butler to lead the coup, promising $3 million to start and $300 million later. Butler went along with the plot to learn their identities. None was ever called to testify or charged with treason. Almost all were founding members of the Council on Foreign Relations CFR. The League was headed up by DuPont and J.P. Morgan cartels. Supporters were Andrew Mellon, Sun Oil, Rockefeller, E.F Hutton, US Steel, General Motors, Chase, Standard Oil and Goodyear Tires. Money was funneled through Senator Prescott Bush through his Union Banking Corporation and Brown Brothers Harriman. To the plotters bragged about Bush’s connections with Hitler. Germany had promised Bush they would provide weapons for the coup.
Butler concluded war is the oldest, most profitable, most vicious racket. It is international in scope. Profits are reckoned in dollars and losses in lives. It is conducted for the benefit of the very few at the expense of the very many. In WWI a handful garnered all the profits. At least 21,000 new millionaires and billionaires were made in the US. They admitted their blood games in their income taxes. Others falsified their tax returns. None shouldered a rifle, dug a trench, went hungry in a rat infested dugout, suffered sleepless, frightened nights, ducked shells, shrapnel, and machine gun bullets. None parried a bayonet thrust of an enemy or were wounded or killed in battle.
The public paid for grave stones, mangled bodies, shattered minds, broken hearts and homes, economic instability, depression and all its attendant miseries, and back breaking taxation for generations.
Now I see international war clouds gathering. Sides are being chosen. France and Russia are standing together. Italy and Austria are side by side. Poland and Germany are working together, forgetting their dispute over the Polish corridor. The assassination of King Alexander of Yugoslavia complicated matters. Italy was ready to jump in. France and Czechoslavakia waited. They all looked forward to war. Not the people, who fight, pay and die. Those who foment wars stay home to profit. 40 million men are armed. Statesmen and diplomats lie that war is not in the making. Hells, bells! These men are not being trained to be dancers!
In italy, Premier Benito Mousselini said in “international Conciliation”, the Carnegie Endowment for International Peace publication: “And above all, Fascism, the more it considers and observes the future and development of humanity, … believed neither in the possibility, nor the utility of perpetual peace… war alone brings up to its highest tension all human energy and puts the stamp of nobility upon the people who have the courage to meet it.”
His well-trained army, fleet of planes and navy are ready for war. His stand at Hungary’s in its dispute with Yugoslavia showed that. Also troops were quickly mobilized on the Austrian border after the assassination of Dollfuss. Other Europeans rattled their sabers for war.
Herr Hitler rearmed Germany and constantly demanded more arms. France recently increased military service from a year to 18 months. Nations are camping in their arms. The mad dogs of Europe are on the loose.
In the Orient, in 1904 when Russia and Japan fought, we kicked out our old friends, the Russians, and backed Japan. Our generous international bankers were financing Japan. Now we are being poisoned against Japan!
What does the “open door” policy to China mean to us? Our trade with China is about $90 million a year. We have spent $600 million in the Philippines in 35 years. “Our bankers, industrialists and speculators” have private investments there of less than $200 million. To save the China trade and protect these private investments, we are being stirred up to hate Japan and go to war – a war that might well cost us tens of billions of dollars, hundreds of thousands of lives of Americans and many more hundreds of thousands of physically maimed and mentally unbalanced men. Millions and billions of dollars would be piled up by a few munitions makers, bankers, ship builders, manufacturers, meat packers, speculators.
Yes, war pays high dividends. But what does it profit the men who are killed, their mothers and sisters, their wives and sweethearts, their children? Except for the very few to whom war means huge profits.
Until 1898 we didn’t own a bit of territory outside the mainland of North America. Our national debt was a little more than $1 million. Then we became “internationally minded”. We forgot George Washington’s warning about “entangling alliances”. We went to war. We acquired outside territory. Our national debt jumped to over $25 million. We ran a little behind year after year. It would have been cheaper to stay out of foreign entanglements.
The lesson is don’t forget the failed 1934 coup attempt by the economic royalists on Wall Street, owned and run from the City of London. None were jailed. They have the same agenda today. We Indigenous can stop war by occupying the means of production to deny them the goods they need.

Kay Kyser sang in her song, “Praise the Lord and Pass the Ammunition”: “Yes, the sky pilot said it, you gotta give him credit. For a son-of-a-gun of a gunner was he, shoutin’ praise the Lord, we’re on a mighty mission. All aboard, we ain’t a goin’ fishin’. Praise the Lord and pass the ammunition, and we’ll all stay free”. http://www.youtube.com/watch?v=LJfJPxLntZU praise the lord