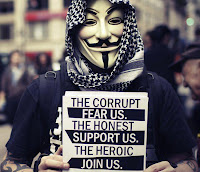 Good day my friends.
Close to half of the population at Guantanamo Bay are now hunger striking. It is time to stand in solidarity with them by demanding the Obama Administration to live up to it's promises to shut the center down. Please take just a minute to sign a petition, send an email, and post a tweet.
Some relevant facts:
There are 166 detainees currently housed in Guantanamo Bay.
86 have been approved for release.
30 Yemenis are being "conditionally detained" because of an "unstable" homeland.
46 are being detained indefinitely without trial.
Some have been waiting more than 11 years for their release.

MNN. Apr. 27, 2013. James Anaya, the special UN rapporteur on the rights of Indigenous peoples, says the Harper government until recently refused his request to investigate the “human rights situation of Indigenous peoples”. He was refused official entry into Canada. The violations were so serious that he was ready to meet through unofficial channels. He was finally given a permit, with conditions?

Canada’s national human rights commission is getting flooded with complaints from Indigenous about the discrimination and misconduct of their corporate Indian band councils for selling out our resources to Harper’s multinational banking buddies. Harper is telling us to go to the very agents we are complaining about. Harper’s job is to shut us up and speed up the rape of our resources.