MNN. Apr 30, 2013. Federal Court of Canada was asked: Does Canada have a constitution? Are Sections 109 and 132 still part of the British North America Act 1867? If so, our rights to our lands, resources, funds and our sovereignty supersede that of Canada. [Thahoketoteh of Kanekota v. the Queen, T2007-13, Apr. 8, 2013].  Judge Snider refused to answer this simple question, in 4 pages of nonsense. She ordered Thahoketoteh pay $500 for the tele-conference trial, which cost $0. The corporate court system is set up to encircle, subvert and overthrow anyone going against the Corporation of Canada.
Kanekota was a direct confrontation in their own arena, by their own rule of law, which they did not follow. They sit in judgment as one of the parties in the dispute, violates international law against genocide. Canada could only deny us our basic human rights.
Canada has a constitution which the courts do not have to follow because it was not ratified by the people. At the signing of the 1948 UN Declaration on Human Rights, Canada and US signed. A clause was added exempting US and Canada from the International Criminal Court. They could never be tried for any human rights violations. They can only be tried domestically. Accordingly, they are waging war everywhere in the world.

Their blatant disregard for the questions indicates their uncertain future. With their accomplices, the UN, IMF, World Bank, BIS and other Rothschild owned banks, they are fighting the advancing consciousness of the people who live with the land.

We are a free people with free minds. Their fake system needs our resources and our labor. They are trying to break us up into moderate and militant blocks to fight or negotiate with one side or the other. The world balance is shifting. Rather than encircling us, they are being encircled. To start WWIII they need to steal our resources, funds and labor.
Many supported our case to help promote our constitution of peace. Judge Snider’s “fatally flawed” decision opened the eyes of all, that going into their theater of the absurd is a waste of time.
Thahoketoteh felt that the energy of putting his mind into the case was anti-spiritual. They will never rule against the corporation. Nor allow a third party adjudicator to make it a fair hearing. We are living in a military dictatorship with no rule of law. Our true constitution for thousands of year is the law of this land. We will not appeal this case.  The white roots of peace have been exposed for all on Great Turtle Island to follow to its roots. As Jimi points out in his classic “If 6 was 9, I don’t mind. If all the hippies cut off their hair, I don’t care. Cause i got my own world to live through, and I ain’t gonna copy you.”

Photos: Occupation of Alcatraz Exhibit opens on the Rock! 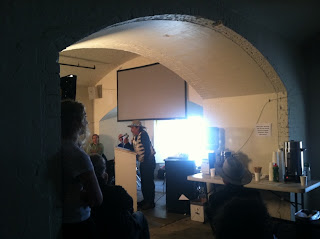 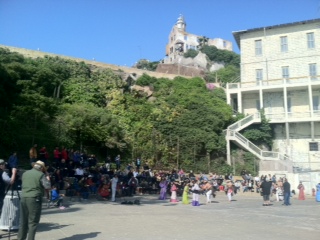 'We are still here!'

Photo 1: Eloy Martinez, veteran of the occupation of Alcatraz Island November 1969 until June 1971, speaking  Sunday, April 28, 2013, on the occasion of the National Park Service providing a secure site on the Rock to exhibit artifacts during the occupation and that we are still here! And here to stay!
Video: Honor Songs
Photo 2: Pomo dancers opening the occasion on Alcatraz Island, The Rock, where an exhibit depicting the Indian movement that occupied the ROCK for 19 months.will be among the display.
AIM-WEST 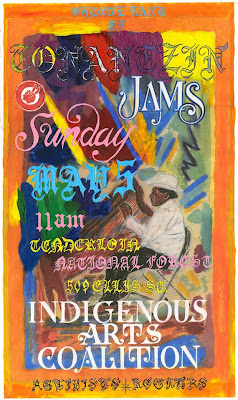 MNN. Apr. 29, 2013. The conquest of our resources by a few who impose misery, oppression and indignity is ending. The “Council of Chief Executives” CCCE describes itself as a “not-for-profit, non-partisan organization” of CEOs of Canada’s largest corporations. They are the shadow government devoted to theft and genocide! It controls many trillions in stolen Indigenous assets. Formerly called the “Business Council on National Issues” BCNI, its membership is a Who’s Who of Canadian business and politics. Have a look. They are accountable only to the shareholders that own the Corporation of Canada.
Current CCCE President John Manley was named Time Canada’s “Newsmaker of the Year” in 2001 for crafting cross-border anti-terrorism strategies with the first U.S. Homeland Security Secretary Tom Ridge. Other members are part of the war machine: Air Canada, Bombardier, CN, Deloitte, Encana, GlaxoSmithKline, IBM, KPMG, Royal Bank of Canada, and many other firms at the heart of the Canadian economy on stolen Indigenous land.
Canada is a plutocracy run on bribes and corruption. Paul and Andre Desmarais, co-CEOs of Power Corporation, are called “Canada’s Rockefellers” for their enormous wealth, influence, and political power. They shape, influence and dictate Canadian foreign and domestic policy.

Doctor, lawyer, corporate Indian chief, all politicians get bribed!
BCNI drafted the 1986 Competition Act:
BCNI approached Andre Ouellette, Minister of Consumer and Corporate Affairs, with an offer he didn’t refuse. BCNI CEO Thomas D’Aquino had, “…previously decided that Canada needed a new competition act.” D’Aquino spent $1 million to hire a team of 25 lawyers who by 1985, “…had produced a 236-page master plan. Incredibly, it became Canada’s new Competition Act, virtually word for word.”
There were no provisions for class-action lawsuits. Criminal conspiracy was unprosecutable. Criminals were sent to civil courts to be processed.
From 2003 to 2006 the Council launched the secret “Security and Prosperity Partnership,” [North American Union NAU] between US, Canada and Mexico. The “North American Competitiveness Council”, representing the 50 largest North American corporations and including many of the Canadian Council’s members, shaped SPP talks.

The SPP eventually folded. The Council still wants to create a continental security perimeter and free trade zone to enhance their banking and business interests.
The Canadian Council of Chief Executives controls national policy in the interest of the few, and drafts legislation favorable to them.
These secret provisional corporate governments are being revealed for being the shadow government. As we read this now, the shackles are starting to fall. The corporations are going down, as Leonard Cohen sang: “They sentenced me to 20 years of boredom, for trying to change the system from within. I’m coming now, I’m coming to reward them. First we take Manhattan, then we take Berlin.”
http://www.corbettreport.com/power-behind-the-throne-the-canadian-council-of-chief-executives/
MNN Mohawk Nation News kahentinetha2@yahoo.com  Thahoketoteh@hotmail.com For more news, books, workshops, to donate and sign up for MNN newsletters, go to www.mohawknationnews.com  More stories at MNN Archives.  Address:  Box 991, Kahnawake [Quebec, Canada] J0L 1B0.