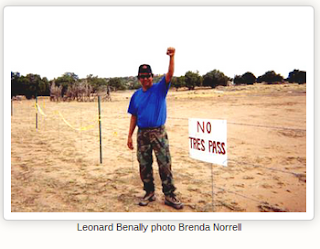 “We have been living in silence and we have been dying in silence. We want to share with others our struggle. If we walk alone, we are useless, we are nothing,” Leonard Benally said.

It is with great sadness we share the news of our dear friend and brother Leonard Benally, Dine' of Big Mountain, passing to the Spirit World.

Dine' Leonard Benally of Big Mountain, who spent his life fighting Peabody Coal and resisting relocation from his homeland, passed to the Spirit World on Friday. Leonard's family spent the past decades resisting relocation from Black Mesa and naming the names of those responsible for the misery that Navajos are surviving, including tribal politicians, attorneys, and Arizona Congressmen.

Leonard's sister, Louise Benally of Big Mountain, said, "Leonard my dear brother struggled with cancer and has taken his journey to the Spirit World. He was a good person, a fighter. He fought for the freedom of his people all his life and will continue to fight from above. Prayers for our family at this time. Leonard's spirit will live on as a warrior and will always be loved by many."

In memory, I am sharing this words from an interview with Leonard on Big Mountain, after the Sundance was bulldozed there.

Leonard said, “We have been living in silence and we have been dying in silence. We want to share with others our struggle. If we walk alone, we are useless, we are nothing."

“The old people have told us, take your struggle out to other struggles. Then you can stand together with one freedom. They isolate us, dislocate us and relocate us. Relocation is nothing new to Indigenous people, it has been going on for 500 years.”

Leonard and his family have spent their lives striving to protect the sacred area of Big Mountain, and exposing the lies of corporations, the media and polticians. The deception resulted in the removal of more than 14,000 Navajos who were relocated from their homeland and the "gouging out of the liver" of Mother Earth by the coal mining of Peabody Coal on Black Mesa.

The coal mining resulted in the theft of the pristine aquifer water and the pollution of the land, water and air, resulting in widespread disease, including respiratory diseases and cancer for those who remained and resisted relocation.

The family invites everyone to Leonard's home site on Big Mountain for a service on Sunday, Oct. 20. It will begin at sunrise and last all day.


Big Mountain, where the profession is hope

In the days of little rain, Leonard and John Benally talk of struggle, hunger and justice on Big Mountain

BIG MOUNTAIN, Ariz. – Leonard Benally says it is time for the people of Big Mountain to stop suffering alone and join oppressed Indigenous peoples around the world in the struggle for freedom, democracy and justice.
“We have been living in silence and we have been dying in silence. We want to share with others our struggle. If we walk alone, we are useless, we are nothing,” Benally said.
“The old people have told us, take your struggle out to other struggles. Then you can stand together with one freedom. They isolate us, dislocate us and relocate us. Relocation is nothing new to Indigenous people, it has been going on for 500 years.”
On a hot summer day, there is little water or food in any of the homes on Big Mountain. There are no telephones, the roads are dirt and wash away with male summer rains, then the drought returns. The people here know hunger, even the dogs are going hungry this summer.
“We are victims of terrorism. It takes everything out of us. It breaks us. It tears us down emotionally, psychologically and spiritually,” Benally said.
“People at the New Lands still come up here and they encourage us to hold on to what they let go of. They say they are having their own problems, going into despair with alcoholism and feelings of abandonment.
“But other than that, we have hope out here. Hope lives in the heart. We have a profession, it is the profession of hope." 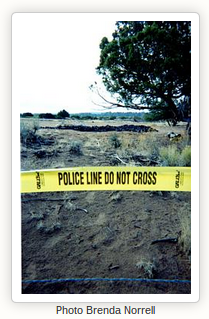 The terrorism here for Navajos resisting relocation, he said, is no different than the terrorism of the Taliban and the backdoor schemes that have resulted in the desecration of sacred sites around the world, such as demolition of Buddhas in the East. As for President Bush, he said, “The corporations bought him the seat. He was selected, not elected.”
“Democracy is left behind in the dust. Out here there is no democracy.”
Benally said the so-called Navajo-Hopi land dispute could have been stopped in the ‘60s. “Right now they are trying to cover up this great sewer of injustice.
“To the anthropologists, we’re just a part of a Jurassic Park, a curiosity to tourists.
“Like it our not, we are earthborn and we are Indigenous to this land. My ancestors were out here during the Spanish invasion. That’s how far this thing goes back.”

Glancing up at the Sundance grounds, fenced with barbed wire and yellow police tape, he said, “They call us ‘trespassers,’ but for what they did out here, they are terrorists.”
Referring to the bulldozing of a nearby hogan a few years ago, he said, “They are trying to erase the history of our people. They tell us we have no history or no tomorrow. But we are still resisting and quite heroically.” 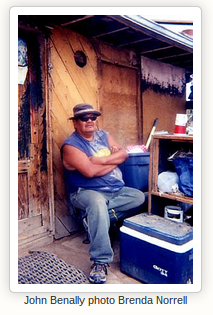 Benally said it was a “terrorist act” to bulldoze Camp Anna Mae Sundance grounds in August 2001. Hopi police were accompanied by BIA and Navajo County police when the grounds were leveled. Now Hopi Rangers patrol the Sundance grounds. Hopi officials fenced the Sundance grounds and posted “No Trespassing” signs on the juniper trees this summer.
“They don’t respect other peoples’ beliefs. The Sundance is about struggle. It was brought down for a reason, because of the hardship we are in,” Benally said.
“We are coming together, standing together in prayer.”
Benally said the Hopi Rangers who patrol the Sundance grounds admit they are embarrassed by the action, carried out as a result of orders from top Hopi officials.
“They sit up there five or six hours a day and all they do is watch that thing. It is always going to be a sacred spot. It’s been there for 16 years. They came in with a backhoe and chainsaw and then they bulldozed everything down. They always say the orders are not coming from the people, but coming from above.”
The years 2001 and 2002 have been years when the struggle has truly meant struggle. There was the tragic passing of Leonard’s wife Arlene Hamilton-Benally in a car accident in April, then the passing of relocation resister Roberta Blackgoat at the time of Benally’s memorial in San Francisco.
Benally said some people claim that the Navajo resisters of Big Mountain have become broken with so much sorrow, but that is far from true.
“Not everyone has jumped on the bandwagon of despair. There are still independent thinkers out here. We are still moved by these things, but the spirit of resistance is strong.”
Praising his wife for giving a “voice to the voiceless,” he said, “Arlene fed everyone out here on the HPL. She was a hero of the people. She was the heart of the people. Her spirit will always live in this land forever.
“Arlene was a diehard revolutionary. She did not back down. She wanted a dignified life out here for everyone on the so-called HPL.
“All we are fighting for is a dignified life. We will never surrender.”
“Our desire is the same as the rest of the world. We want to live in freedom, democracy and justice. Our misery out here is just for the luxury of a few individuals. We are being oppressed and we have lived with it in silence.”
John Benally, Leonard’s brother, sits without food for himself or his dogs through the pinon and juniper trees from the bulldozed Sundance grounds.
“We have suffered enough,” said John Benally. He welcomes a new federal study on the effects of Navajo Hopi relocation.
“We are being neglected by the Navajo government and the Hopi government. I really support the idea of the study. Our kids do not like education because of the relocation effect.
“I do not get food stamps or anything. Its too much harassment to fill out the forms and get food stamps. The interviewer can interrogate you. They should make it easier.”
John said he worked for Peabody Coal Company, just down the dirt road on Black Mesa, for seven years. Now he receives nothing back from the taxes he paid.
“Throughout the year we are harassed, our livestock is impounded and we are intimidated by the Hopi Rangers. The police are monitoring us and we are slandered many times when they say we are trespassers. The Hopi Rangers and Hopi monitors are the trespassers.
“They desecrated our ceremonial Sundance grounds where all people come and pray from the Four Directions.”
“The only way to resolve this is to give Navajo back their original land.”
John said, too, it is time for Navajos to return to farming. “If we are farmers, we can help people. Opening a mine, you think that is the answer? Forget it, only a few people will work. I know people who have died of black lung.”


Mining on Black Mesa is destroying the air for the plants, animals and people. “This whole relocation should be investigated,” he said.