Ofelia Rivas, O'odham, is just returning from the Yaqui highway blockade in Vicam Pueblo, Sonora, Mexico. The Yaqui Traditional Authority of Vicam has maintained this highway blockade since June, in protest of Mexico stealing their water from the Rio Yaqui, by way of the Independence Aqueduct, for the city of Hermosillo.
Yaqui have lived here since time immemorial and depend on the water for survival. Their highway blockade of a major trucking route from the Pacific coast to the US has had a major impact and slowed the flow of produce into the US.
The Traditional Authority of Vicam hosted the Zapatistas, Marcos and Comandantes, here in 2007 and continue in the struggle for dignity, autonomy and justice.
Photos: Highway blockade Vicam with couple on bike; youths wearing their new Defender of Water T-shirts created and provided by Dwight at the Gloo Factory in Tucson; woman working embroidery with entire family; evening road blockade.

Support the work of Ofelia Rivas and O'odham Voice against the Wall:
O'odham Solidarity Project:
http://tiamatpublications.com/

Please share this link at Censored News
http://bsnorrell.blogspot.com/2013/10/yaqui-highway-blockade-photos-oct-19.html
at October 19, 2013 No comments:

Military assault on Mi'kmaq: 29 Messages of love and support 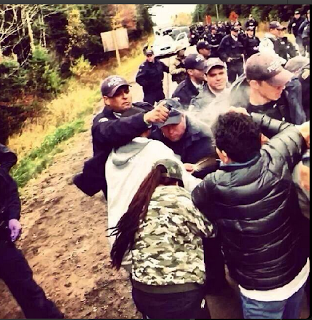 
With the Keystone XL thwarted by Natives in the US, TransCanada has a new pipeline route from west to east, and Mi'kmaq warriors are targeted

With the Keystone XL tarsands pipeline plan thwarted by Native Americans in the US, TransCanada announced a new tarsands pipeline route from the west to the east in Canada. New Brunswick is part of this pipeline plan and Mi'kmaq warriors are now targeted by the oil and gas industry.
Big Oil faced a public relations disaster in Sept. because the story became public that thousands of song birds, including endangered species, had died in a gas flare in New Brunswick.
CBC published an article that 7,500 songbirds -- some endangered species -- had died when they flew into a gas flare of an Irving Oil facility in New Brunswick.
http://www.cbc.ca/news/canada/new-brunswick/7-500-songbirds-killed-at-canaport-gas-plant-in-saint-john-1.1857615
This could not have been good news for Irving Oil, which just entered into a joint partnership with TransCanada on August 1 to bring dirty tarsands oil to the east and to New Brunswick.
The new pipeline plan comes after Native Americans in the US thwarted the massive dirty oil pipeline from the north to the south, from Alberta, Canada, to Texas. Lakotas are among those leading the fight to protect the massive water resource of the Ogallala Aquifer.
The construction of the southern route of the Keystone XL pipeline, promoted by President Obama, has already resulted in the destruction of east Texas family farms and the jailing of elderly Texas farmers who resisted.
In August, TransCanada’s announced that it would proceed in Canada with the development of the Energy East Pipeline to transport western Canadian tarsands oil to Montreal, Quebec City and Saint John. The partners also announced they would construct the new Canaport Energy East Marine Terminal in New Brunswick.
http://www.irvingoil.com/newsroom/news_releases/irving_oil_and_transcanada_announce_joint_venture_to_develop_new_saint_john/
TransCanada is pushing ahead with this new pipeline from western to eastern Canada largely because of protests by Native American and other environmental activists activists, in the US which have dashed their hopes for the northern route of the proposed tarsands Keystone XL pipeline, according to the Globe and Mail.
http://www.theglobeandmail.com/report-on-business/industry-news/energy-and-resources/transcanada-set-to-announce-nation-builder-pipeline-to-the-east/article13543762/
Now, with a new vast pipeline and joint venture underway, there is no doubt that Irving Oil and TransCanada want the Mi'kmaq warriors -- and any other environmentalists who would oppose this new pipeline -- silenced and out of the way.
Currently, Southwestern Energy in Houston is in court pushing to explore the Elsipognog Mi'kmaq area and to legally halt the Mi'kmaq opposition to fracking.
http://www.swn.com/operations/pages/nb.aspx
Meanwhile, the identity of the camouflaged snipers that attacked the Mi'kmaq camp on Thursday is still underway.
brendanorrell@gmail.com