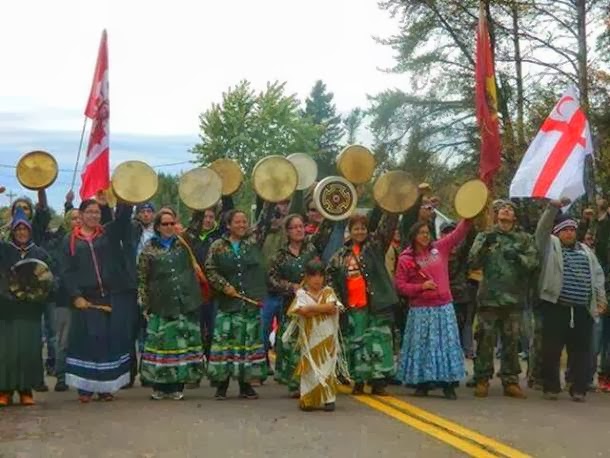 Mi'kmaq say, “We are still here, and SWN will not be allowed to frack”
What: Sacred Fire blockade in response to SWN development
Where: Highway 11, outside of Laketon, New Brunswick, Canada
When: Monday, Nov. 4 at 12 pm
Media Contact: Amanda Lickers, 705-957-7468

Shared by Halifax Media Co-op
http://halifax.mediacoop.ca/newsrelease/19570
ELSIPOGTOG, New Brunswick -- The Elsipogtog community and the people of the Mi'kmaq nation are responding to SWN's stated intention to resume shale gas exploration in New Brunswick. Community members and traditional people will come together to light a Sacred Fire to stop SWN from passing, in order to ensure that the company cannot resume work to extract shale gas via fracking. The Sacred Fire will last a minimum of four days and is supported by the Mi'kmaq people and the community of Elsipogtog. This comes as part of a larger campaign that reunites Indigenous, Acadian and Anglo people.
This is also an act of reclamation, as Mi'kmaq people are using the land in a traditional way, and are exercising their treaty rights, which includes ceremonial practices. The Mi'kmaq people have not been sufficiently consulted over shale gas exploitation and do not support SWN working on their territory.
The Sacred Fire blockade is also supported by the Mi'kmaq Warrior Society and the Highway 134 encampment.
“SWN is violating our treaty rights. We are here to save our water and land, and to protect our animals and people. There will be no fracking at all,” says Louis Jerome, a Mi'kmaq sun dancer. “We are putting a sacred fire here, and it must be respected. We are still here, and we're not backing down.”