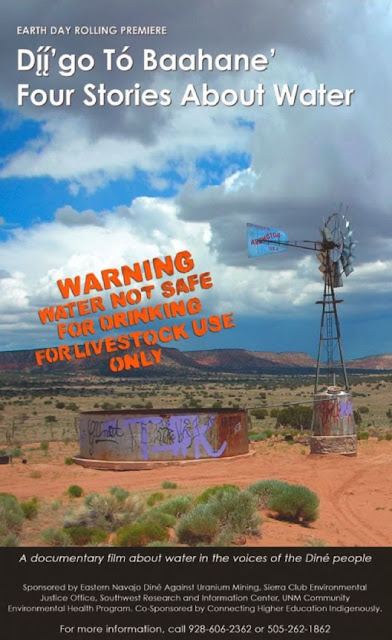 The International Uranium Film Festival will feature two films focused on the Navajo and Pueblo areas where both Navajos and Pueblos were -- and are -- victims of Cold War uranium mining and radioactive tailings left behind.

Navajos and Pueblos were sent to their deaths without protective clothing, even though the US government and mining companies knew of the dangers of radiation.

The poisoning of the people did not end there. The dust from the uranium mines blew across their food drying in the sun. The women washed clothes filled with radioactive soot. The runoff poisoned both the wildlife, including the deer that was food, the waterways, and the people.

The legacy of death continues today, as radioactive tailings remain scattered across this region of Pueblos and the Navajo Nation, between Albuquerque, New Mexico and Flagstaff, Arizona.

In the Navajo communities of Cove and Red Valley, near Shiprock, N.M. every family had members stricken with respiratory diseases, cancer and other rare diseases. One elderly Navajo woman in her 80s was living in a radioactive hogan, built with radioactive stones.

The film, Dii'go To Baahaane Four Stories about Water, in Dine' (Navajo) with English subtitles, and the film Tailings, will be shown at the Uranium Film Festival in Albuquerque. Schedules are still being prepared for the festivals in Santa Fe, and in Window Rock on the Navajo Nation.

Manny Pino, Acoma Pueblo in New Mexico is a longtime activist exposing Cold War uranium mining and the existing radioactive contamination on Acoma and Laguna Pueblos. Pino is a professor at Scottsdale Community College in Arizona.


During testimony before the Indigenous Peoples Tribunal for Leonard Peltier in October in Green Bay, Wisconsin, Pino explained that sacred Mount Taylor is near the Jackpile Mine, which operated for 30 years, and became the largest open pit uranium mine in the world.

Pino pointed out that the Four Corners area was declared a "National Sacrifice Area." It was Treaty land. Pino showed a map revealing that uranium mining is concentrated on Indian lands in the west.

Pino described how he became active in this struggle because of his own family. "My father, uncles, cousins, numerous relatives, worked in the mine from Acoma and Laguna Pueblos where I'm from."

Many waterways, rivers and watersheds of Indigenous Peoples, utilized for drinking water, are in this region where uranium mining has been concentrated. The result was the water has been contaminated and cancer began appearing in the Pueblos and elsewhere.

The Grants Mineral Belt in the area of Acoma and Laguna Pueblo in northwestern New Mexico is another area of contaminated uranium mining sites. Paguate, a village of 3,000 people in Acoma Pueblo, was heavily contaminated. Pueblo families were drying their food, drying their meat, as the dust of uranium blew over their food. They also grew their food on contaminated soil.

"They continued to graze their sheep and cattle." Analysis show radioactive contamination in the livestock, just as with the food.

Pino said the Rio Grande River is the lifeblood of New Mexico. It is the main drinking water source. However, the people of New Mexico are now drinking uranium contaminated water.

Navajo uranium miners were mining without any protective clothing. The result is cancer clusters. Now the Pueblos and Navajos have some of the highest rates of cancer because of this Cold War uranium mining.

Further, Lakotas in Pine Ridge and Cheyenne River in South Dakota are suffering from high rates of cancer because of uranium mining and contamination.

Navajos in the Four Corners area died in large numbers. It happened also on Spokane River, on Indian lands in South Dakota and areas of Canada. Native people died of cancer and respiratory diseases from the mining.

"The majority of ore in the Southwest went to the US Department of Defense to make weapons of mass destruction," he said.

Pino said his people have been victims of the nuclear holocaust. "The workers brought the waste home on their clothing." Grassroots people were not educated as to the dangers.

Today, uranium mining is targeting the land of the Havasupai and the Grand Canyon, mining which will poison the Colorado River, the mother river of the Southwest.

During the nation's largest radioactive spill, the Church Rock uranium mill spill in New Mexico on July 16, 1979 poisoned Navajos' land and water. United Nuclear Corporation's Church Rock mill tailings disposal pond breached its dam and over 1,000 tons of solid radioactive mill waste, and 93 million gallons of radioactive solution, flowed into the Puerco River and flowed downstream and to the west, through Navajo communities in Arizona.

Mohawk John Kane 'I am ready this year!'

By John Kane, Mohawk
I Am Ready This Year!
Censored News
Okay, I admit it. Last year when our special month of November rolled around, National Native American Heritage Month, I purposely kept quiet about it until December. I sat silently all month long and sure enough — nothing. So on December 2 I wrote, “November was what? Our month? Really? Who knew?” for my blog (http://letstalknativepride.blogspot.com/2012/12/november-was-what-our-month-really-who.html). I won’t use this column to restate my thoughts from last year but by all means, check it out.
But I am not sitting back this year. No sir! As soon as Mr. Obama offered his Presidential Proclamation (http://www.whitehouse.gov/the-press-office/2013/10/31/presidential-proclamation-national-native-american-heritage-month-2013), I copied the press release from the White House website, pasted it to emails and sent it to everyone. I even posted it on Facebook. Now no one will be able to say, “I didn’t know.”
So let the “honoring” begin!
One of the big days for the Haudenosaunee in this special month is November 11.
That can’t be. That’s Veterans Day.
How can a U.S. military holiday be scheduled on our Canandaigua Treaty Day? This is our big chance to march through the village of Canandaigua arm-in-arm with state and federal dignitaries to mark the most famous treaty of the Six Nations. What self-respecting U.S. politician will pass up Veterans Day to keep this charade going?
This is where we pretend it is an actual “Six Nations” treaty even though no Kanienkehaka (Mohawks) signed or participated in it. We pretend that it isn’t violated everyday by the very ones we are holding hands with. We also pretend that the basis of the treaty, which was the United States recognition of our lands and the promise by them to “never claim the same” somehow can be ignored as long as $4500 worth of “treaty cloth” shows up once a year.
How can we fake the significance of this crappy document if all the white guys are going to be tied up war mongering?
Well, let’s just move on. Oh no, the American Thanksgiving is in our month. At least we don’t have to see all those cutesy “pilgrim” and “Indian” cardboard cut outs any more. But we still have to hear all the lies about the “First Thanksgiving” as though they invented the concept. And, of course, watch football. Couldn’t they at least have scheduled the Washington football team for a bye week in November so we could have simply one less day of hearing about the “Redskins” in our month?
So, let me get this straight — we get a month proclaimed for us and they get two holidays out of it? Oh, wait, we do get a day. I just found it at the bottom of the White House press release. The President calls upon all Americans to celebrate November 29 as Native American Heritage Day.
Hold on a second. That’s Black Friday. How can our day be Black Friday? You call on all Americans to celebrate our day on Black Friday? How? By trampling each other at Walmart? Well, unless someone is picking me up a 65-inch flat screen TV at some unheard of low price, what is there to celebrate?
All right, so no real holiday, nothing really special about the month as far as we are concerned. Can we at least get a moratorium on attacking our people for the month? Can you stop harassing our hunters? Can you stop cutting our trees? Can you stop using your anti-mob laws and anti-terrorism laws against our businesses? Can you stop your tax agents from trying to force your laws and regs on us? Can you stop trying to steal or destroy our land? Can you stop trying us in your courts? And can you stop trying to claim us as your citizens? Just for the month?
Instead of “honoring” our heritage, what about respecting us? Just for the month.
Maybe I’m not ready for National Native American Heritage Month this year but I really would be honored to receive that 65-inch flat screen television.

THE BAD AND NOT-SO-BAD NEWS.

Keny Arkana with this rap titled “V pour Verités.” In one part he says, “Blessed are those who stand up for something, those who construct something else.”
———————————————————————————-A clip from the movie “V for Vendetta” about the relationship between the media and obedience, and another way of understanding the words “justice” and “liberty.”
———————————————————————————-
Pedro Infante with the song “I am who I am” by Manuel Esperón and Felibe Bermejo, in the movie “The Third Word” with Marga López, Sara García, and Prudencia Grifell, 1955, directed by Julián Soler. I’m including this one just to piss off those who want to make us do things their way.

[i] Translators’ note: The reference here is to Andrés Manuel Lopez Obrador, ex PRD politician (former Mexico City mayor and PRD presidential candidate) and now leader of MORENA, the “National Regeneration Movement.”
[ii] Translators’ note: The “arbitrary imposition” refers to the installation of PRI candidate Enrique Peña Nieto as president in 2012 in what was widely denounced as a fraudulent election. The “dialogue and negotiation” refers to Peña Nieto’s initiative for an agreement or “pact” between the three major political parties in Mexico, the PRI, PAN, and PRD, regarding how best to roll out the latest round of privatizations.Noviembre del 2013.