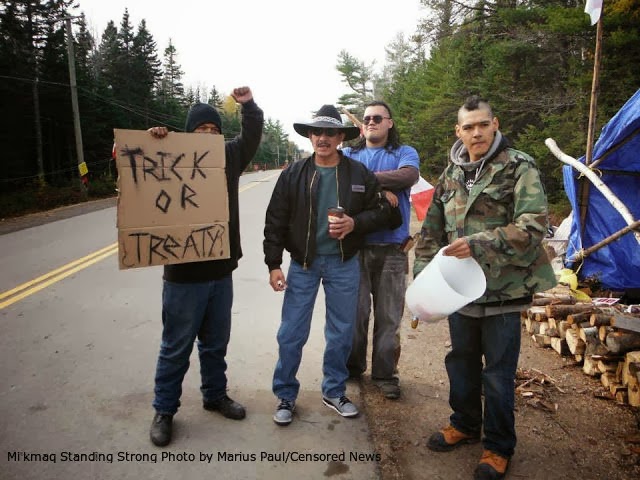 Photo by Marius Paul, published with permission at Censored News, thank you!

By Marius Paul
Censored News
Marius said, "I traveled to Elsipogtog rez, near Rexton, New Brunswick where of recent, our senses were assaulted by images of the RCMP manhandling women, children, and jailing the men who made a stand against such unbridled, disrespectful and hateful display of police powers against Indigenous People. This photo is taken at the camp, Rexton, New Brunswick, rebuilt after the raid by the RCMP to severely hamper any organized resistance against fracking on unceded lands."
"The youths have me very impressed after we all convened within a circle to discuss the sacred."
Marius said to those who continue the resistance in the camp, "My heart will be with you, bros! You stand them down well, and the spirit of the free whispers a chant of the ages. MIQ MAQUI! Proud to be with you, and love to you from out west! With the best of the Maritimes! Land and water protectors -- allies, warriors and youthful ardor against fracking in Miq Maqui Lands!"

Share this link at Censored News
http://bsnorrell.blogspot.com/2013/11/photo-standing-strong-on-mikmaq-land.html
at November 07, 2013 2 comments: