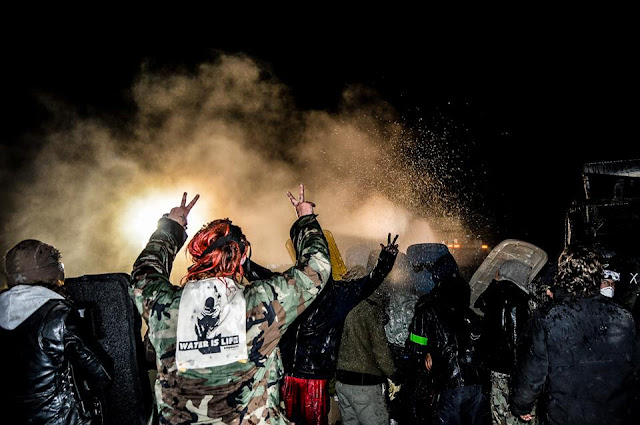 Published on Nov 21, 2016
Good day to the citizens of this world
Today the 21 of November ANONYMOUS TV IS reporting ON POLICE ENGAGING ON PEACEFUL PROTEST.
THE TEMPERATURE IS BELOW ZERO. THESE ARE THE CITIZENS OF THE UNITED STATES OF AMERICA AND THEY ARE BEING TREATED LIKE terrorist
Hundreds of water protectors were injured at the Standing Rock encampments when law enforcement blasted them with water cannons in freezing temperatures Sunday evening. The attacks came as water protectors used a semi-truck to remove burnt military vehicles that police had chained to concrete barriers weeks ago, blocking traffic on Highway 1806. Water protectors’ efforts to clear the road and improve access to the camp for emergency services were met with tear gas, an LRAD (Long Range Acoustic Device), stinger grenades, rubber bullets, and indiscriminate use of a water cannon with an air temperature of 26 degrees Fahrenheit. Some flares shot by law enforcement started grass fires which were ignored by the water cannons and had to be extinguished by water protectors. Law enforcement also shot down three media drones and targeted journalists with less lethal rounds.
National Lawyers Guild legal observers on the frontlines have confirmed that multiple people were unconscious and bleeding after being shot in the head with rubber bullets. One elder went into cardiac arrest at the frontlines but medics administered CPR and were able to resuscitate him. The camp’s medical staff and facilities are overwhelmed and the local community of Cannonball has opened their school gymnasium for emergency relief. The Standing Rock Sioux Tribe’s Emergency Medical Service department arrived on scene to administer medical services. The Cheyenne River Sioux Tribe also sent Emergency Medical Service vehicles to the Oceti Sakowin Camp to assist. Hundreds are receiving treatment for contamination by CS gas, hypothermia, and blunt traumas as a result of rubber bullets and other less lethal ammunition. The military vehicles blocking the bridge were burned in a blockade fire on October 27, after law enforcement raided and cleared the “1851 Treaty Camp,” an occupation of the pipeline corridor and reclamation of unceded territory. Despite the obvious public safety risk, and despite promises from Morton County that they would clear the road, law enforcement has insisted on keeping the vehicles on the bridge for weeks. This obstruction of Highway 1806 threatens the lives of the water protectors and residents of the Standing Rock Sioux Reservation, as emergency services have been needed but unable to reach camp quickly. The blockage also unjustly restricts the free movement of local residents and hurts the Tribe economically by cutting off travel to and from the Prairie Knights Casino. Images of the burned vehicles have fed negative, distorted, and sensationalist media portrayals of the encampment.
Tara Houska, National Campaigns Director for Honor the Earth, says, “For weeks, the main highway to the Standing Rock Sioux Reservation has been cut off, with no movement by the state to address a public safety risk. Attempting to clear the road was met with police spraying people with water cannons in 26 degree weather -- that’s deadly force, it’s freezing outside. They want to kill people for clearing a road? When will our cries be heard? Stop the Dakota Access pipeline. Respect the rights of indigenous people, of all peoples.”
LaDonna Allard, Director of the Sacred Stone Camp, says, “All I can say is why? We are asking for clean water, we are asking for the right to live, we are asking for our children to live. Instead they attack us, because they protect oil. Morton county and DAPL security are inhuman- what is wrong with their hearts?”
Dallas Goldtooth, Indigenous Environmental Network, says, “It is below freezing right now and the Morton County Sheriff’s Department is using a water cannon on our people, that is an excessive and potentially deadly use of force. Tribal EMS are stepping up and providing services that should be the responsibility of Morton County, this is ridiculous. Because of the police enforced road block, ambulances now have an extra 30 minutes to get to the hospital. Those are life and death numbers right there, and Morton County and the State of North Dakota will be responsible for the tally.”
at November 28, 2016