Sámi people and Standing Rock Camp Attorneys work together to get Norway's DNB to divest from DAPL. 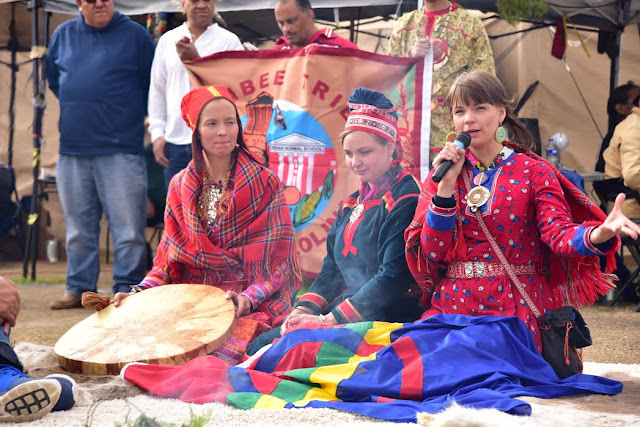 The Norwegian Sámi Association is standing with Standing Rock, and works together with Standing Rock Camp Attorneys, Red Owl Legal Collective, to make DNB and Norway divest from Dakota Access pipeline.
The Camp Attorneys have provided information of all the violations of indigenous peoples and human rights. This information will be provided to DNB and the Norwegian Council on Ethics for the Government Pension Fund Global, the ethical committee of the Norwegian national investment fund, on November 9.DNB and Norway, through the Government Pension Fund Global (NGPFG), have invested in and provided financial backing through loans to the companies behind DAPL. The NGPFG has invested approximately 10.322 billion NOK and DNB approximately 2.8 billion NOK, making Norway a sizable contributor to the Dakota Access Pipeline Project. The Norwegian Sámi Association, The Sámi Parliament of Norway, and Norwegianenvironmental organizations have joined together to show their support for the Standing Rock Sioux Tribe in protecting clean water and fighting against the Dakota Access Pipeline project; they have strongly urged DNB and Norway to divest from DAPL. We demand that DNB and Norway, through its investment fund, withdraw from anythingconnected to the violation of indigenous peoples´ rights and human rights, as well as anything that violates their and own ethical guidelines. We specifically demand that they withdraw support from the companies behind DAPL.The information provided by Red Owl Legal Collective contains evidence and reports of a wide range of violations by both DAPL and the governmental institutions. Some examples of this are: The pipeline was constructed without adequate due process in the form of genuine consultation and the free, prior and informed consent (FPIC) of the Oceti Sakowin, the Great Sioux Nation, including the Standing Rock Sioux Tribe; the disrespect and breaking of Fort Laramie Treaties of 1851 and 1868; the desecration of burial and sacred sites; use of chemical agents, rubber bullets; use of Long Range Acoustic Devices (LRAD); numerous reports of the reckless deployment of firearms; multiple officers discharging weapons into a crowd and at horses, resulting in multiple injuries of people and horses; the use of dehumanizing tactics including marking arrestees’ arms with numbers, cavity and strip searches, cutting piercings off with bolt cutters, and failing to provide food and water to inmates for long periods of time, containment in dog kennels in makeshift conditions en-mass; and the inadequate medical care provided that resulted in severe discomfort; and/or life-threatening health problems. These are only some of the violations committed. DNB and NGPFG will have no other option after being provided this information than to divest from DAPL. DNB have earlier stated, "DNB looks with worry at how the situation around the pipeline in North Dakota has developed. The bank will therefore take initiative and use its position to bring about a more constructive process to find a solution to the conflict. If these initiatives do not give appeasing answers and results, DNB will consider its further involvement in the financing of the project." During the meeting with Norwegian Sami Association and the environmental organizations Naturvernforbundet and Fremtiden i våre hender they re-stated that policy. DNB has also before stated that they will demand that the UN Declaration on the Rights of Indigenous Peoples is complied with in every project on Indigenous land. DNB has layed the list high, and we will be on their shoulders to make them follow thru. Beaska Niillas, the chairman of Norwegian Sámi Association, states that there is no time to lose. “Now is the time for DNB and Norway to be accountable and take action and make an active withdrawal from this disastrous project. DAPL has no intention of following The Supreme Legal courts decision, indigenous rights, human rights, natural rights or the Obama-administration's call to voluntary halt the construction, and they are able to do as they wish because they have the economical support to do it. DAPL companies are able to do as they please because they have the economic backing to do it. There is no time to loose. If both DNB and Norway wish to avoid profound ethics violations and to be complicit in participating in violations of indigenous peoples’ and human rights, then do the right thing.
Divest now.

this is great news I pray for it's success.

This information will be provided ... on October 9th?

It is a positive step in recognising that funding is the Achilles heel of the oil and other environmentally damaging industries.
Banks who fund projects are aware customers will withdraw their accounts if they act unethically. I call it Financial Activism; it is up to us to wise up on these financial institutions.
We have the power to direct policy by being knowledgeable and taking action. It is as effective to withdraw funds as it is to occupy the buildings I would say.Banks are terrified of losing custom and credibility .

This is how the world should work. people working together to make the earth healthy again.

Its very good that indigenous are supporting each other around the world, we cannot afford to be complacent in the face of the global climate emergency.

Jim Terral yes the meeting(s) in Norway happened on the 9th; the original censored news article regarding the corresponding Red Owl legal brief, sent to DNB directly just prior in advance, is here http://bsnorrell.blogspot.fr/2016/11/standing-rock-camp-attorneys-urge-dnb.html, including link to the brief. The brief was then hand-delivered by the Sami representatives in Norway at the meeting(s). It is a good collaboration of efforts internationally between folks on the ground and supporting.