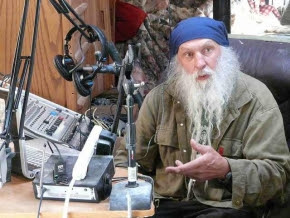 Govinda of Earthcycles is starting up the radio station now!

Govinda is back at Standing Rock Camp setting up Standing Rock Resistance Spirit Radio!
He's at Oceti Sakowin camp. The solar system is set up, and onward and forward as he readies for broadcast the new van of the Indigenous Environmental Network, Indigenous Rising.
Govinda will be setting up the transmitter and preparing for those great interviews, and audios that the radio stations across the continent have been asking for!
We hope to be broadcasting and sharing on Monday, stay tuned!

AIM West Audios
Govinda and I have just finished broadcasting from the American Indian Movement West Conference Conference in San Francisco, check out the video and articles at Censored News.
AIM West Day 1 includes Rachel Lederman, Standing Rock Camp attorney, and Black Panther Erica Huggins speaking on the power to heal within.
http://bsnorrell.blogspot.com/2016/11/aim-west-live-monday-nov-21-2016.html
AIM West Day 2 includes Raquel Arthur, Paiute, and her father Webster Arthur, Nez Perce, in a delegation describing how a pickup truck of white supremacists plowed into the anti-Columbus Day Rally in Reno. A grandmother spent a month in the hospital, and is now in a wheelchair, and the driver was charged with only a misdemeanor.
Also, Dine' Jean Whitehorse describes her journey from boarding school to the takeover of Alcatraz and her life-long struggle with the United States genocidal policies of boarding schools, relocation and sterilization of women.
http://bsnorrell.blogspot.com/2016/11/aim-west-live-tuesday-nov-22-2016.html

Audios for Radio Broadcast
Thank you radio assistant Tony Single Eagle for preparing our audios for a radio station in Tampa, Florida on Sunday. We now have these audios from the broadcast at American Indian Movement West Coast Conference ready for radio broadcast in mp3 format. These audios are the talks by: Rachel Lederman (Standing Rock Camp Attorney) Erica Huggins (Black Panther) and Akabundu (All African Revolutionary Party.) (The tapes are in Singing Eagle's file in the Standing Rock Resistance Spirit Radio DropBox for radio stations. Those are listed in alphabetical order.) Thank you to Alvon Griffin at WMNF in Tampa, Florida, for continuing to broadcast breaking news from Standing Rock on his broadcast Two Worlds Indigenous Radio.

Donate to Govinda at Earthcycles:
https://fundrazr.com/41BSGf?ref=ab_a6CDU2
Donate to Censored News for equipment and travel:
http://bsnorrell.blogspot.com/2016/11/donate-to-censored-news.html
at November 28, 2016

Happy to see Spirit Resistance Radio back on the airwaves ~ Love what you do & appreciate your dedication. Prayers up for you & the voices you share with the world.

Spirit Resistance Radio for the people! Keep getting the word out about Standing Rock Water Protectors. The beauty of the people united for Mother Earth!
Thank you all for being strong and helping each other.