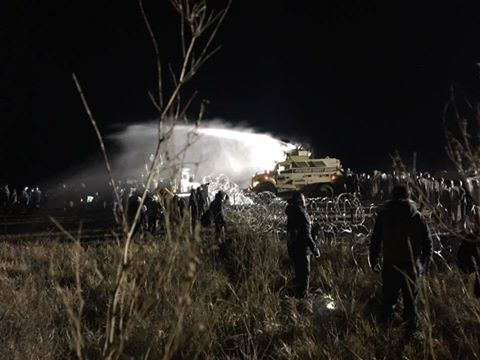 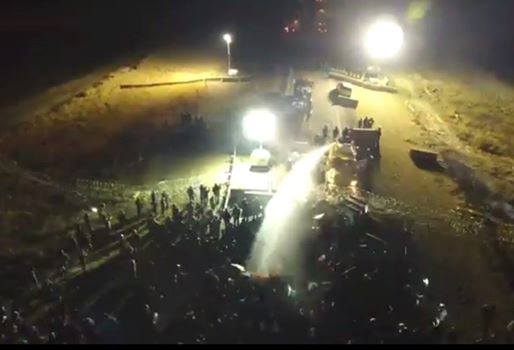 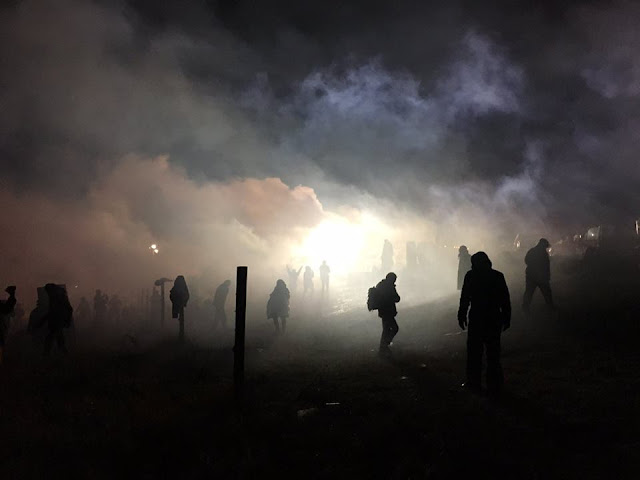 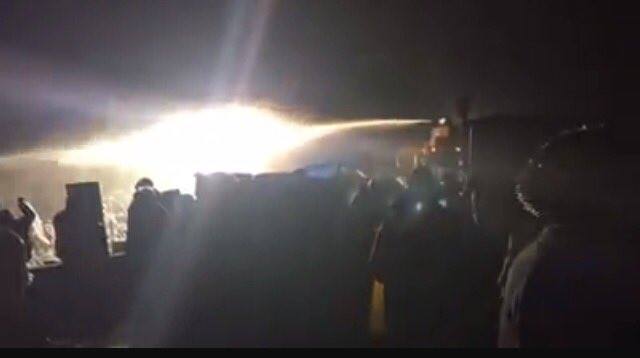 UPDATE FROM HEAD MEDIC OF THE OCETI SAKOWIN CAMP 11:11PM
167 Water Protectors have been injured. 3 of those people are elders.
7 people have been hospitalized for severe head injuries. The police are targeted the heads and legs of Water Protectors.
Scroll down for videos, and go to this link for article:
http://bsnorrell.blogspot.com/2016/11/hundreds-of-water-protectors-injured-as.html 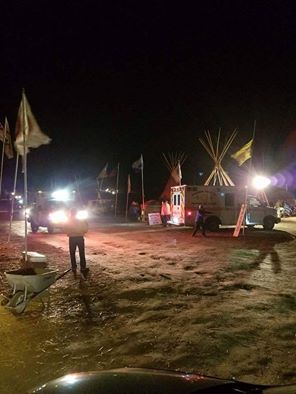 Oyate Media Network -- Ambulances pulling into the Main Camp to treat water protectors who took action at the front lines this evening, power to our people stop DAPL!


"URGENT!"ANYONE INVOLVED IN TONIGHT'S ACTION:The Cannonball Community Center is open for your refuge. Please come to dry off, shower, get water, food, and anything else you need. Please come get dry before going back to camp!"
The physicians and tribal healers with the Standing Rock Medic and Healer Council call for the immediate cessation of use of water cannons on people who are outdoors in 28 degrees F ambient weather with no means of active rewarming in these conditions. As medical professionals, we are concerned for the real risk of loss of life due to severe hypothermia under these conditions. We call on the Morton County Sheriff's office to immediately stop the potentially lethal use of these confrontational methods against people peacefully assembled. We request media support, medical support and observers to the area immediately.
Unicorn Riot livestreamers posted tonight:
BREAKING: Police are tear gassing #NoDAPL water protectors, using the LRAD, stinger grenades, and firing less-lethal rounds into the crowd on Highway 1806 bridge in North Dakota. Police have formed a line with armored vehicles, concrete barriers, and razor wire. It is 27° and police have begun hosing down the unarmed crowd with a water cannon. Water protectors are using a semi truck in an attempt to remove burnt military vehicles which the police chained to concrete barriers weeks ago to keep the bridge blocked on 1806. Our media team is on the ground but currently unable to stream live.
at November 20, 2016 15 comments:

CANNON BALL, North Dakota -- Hundreds of water protectors were injured at the Standing Rock encampments when law enforcement blasted them with water cannons in freezing temperatures Sunday evening.   The attacks came as water protectors used a semi-truck to remove burnt military vehicles that police had chained to concrete barriers weeks ago, blocking traffic on Highway 1806.  Water protectors’ efforts to clear the road and improve access to the camp for emergency services were met with tear gas, an LRAD (Long Range Acoustic Device), stinger grenades, rubber bullets, and indiscriminate use of a water cannon with an air temperature of 26 degrees Fahrenheit. Some flares shot by law enforcement started grass fires which were ignored by the water cannons and had to be extinguished by water protectors. Law enforcement also shot down three media drones and targeted journalists with less lethal rounds.
National Lawyers Guild legal observers on the frontlines have confirmed that multiple people were unconscious and bleeding after being shot in the head with rubber bullets.  One elder went into cardiac arrest at the frontlines but medics administered CPR and were able to resuscitate him.  The camp’s medical staff and facilities are overwhelmed and the local community of Cannonball has opened their school gymnasium for emergency relief. Photo by Adam Alexander Johansson
The military vehicles blocking the bridge were burned in a blockade fire on October 27, after law enforcement raided and cleared the “1851 Treaty Camp,” an occupation of the pipeline corridor and reclamation of unceded territory.  Despite the obvious public safety risk, and despite promises from Morton County that they would clear the road, law enforcement has insisted on keeping the vehicles on the bridge for weeks.  This obstruction of Highway 1806 threatens the lives of the water protectors and residents of the Standing Rock Sioux Reservation, as emergency services have been needed but unable to reach camp quickly.  The blockage also unjustly restricts the free movement of local residents and hurts the Tribe economically by cutting off travel to and from the Prairie Knights Casino.  Images of the burned vehicles have fed negative, distorted, and sensationalist media portrayals of the encampment.
Tara Houska, National Campaigns Director for Honor the Earth, says, “For weeks, the main highway to the Standing Rock Sioux Reservation has been cut off, with no movement by the state to address a public safety risk. Attempting to clear the road was met with police spraying people with water cannons in 26 degree weather -- that’s deadly force, it’s freezing outside. They want to kill people for clearing a road? When will our cries be heard? Stop the Dakota Access pipeline. Respect the rights of indigenous people, of all peoples.”
LaDonna Allard, Director of the Sacred Stone Camp, says, “All I can say is why? We are asking for clean water, we are asking for the right to live, we are asking for our children to live. Instead they attack us, because they protect oil. Morton county and DAPL security are inhuman- what is wrong with their hearts?”
Dallas Goldtooth, Indigenous Environmental Network, says, “It is below freezing right now and the Morton County Sheriff’s Department is using a water cannon on our people, that is an excessive and potentially deadly use of force. Tribal EMS are stepping up and providing services that should be the responsibility of Morton County, this is ridiculous. Because of the police enforced road block, ambulances now have an extra 30 minutes to get to the hospital. Those are life and death numbers right there, and Morton County and the State of North Dakota will be responsible for the tally.”
The Standing Rock Medic and Healer Council released this statement: “The physicians and tribal healers with the Standing Rock Medic and Healer Council call for the immediate cessation of use of water cannons on people who are outdoors in 28F ambient weather with no means of active rewarming in these conditions. As medical professionals, we are concerned for the real risk of loss of life due to severe hypothermia under these conditions.”
####
at November 20, 2016 55 comments:

Please post & distribute.
MNN. Nov. 20, 2016. Historically, after the Revolutionary War, every town in North America had the same beginning as what is happening to the Lakota today at Standing Rock.

The Army Corps of Engineers would investigate the new settlers complaints against the original people. They would deputize the settlers, give them guns, have them enter each INDIAN village, kill every man, woman and child, steal their possessions and land and incorporate their new town. They buried the bodies in a big hole and covered up their dirty deed. Over 100 million dead INDIANS was the result. No one was punished for this genocide. [Indian Ring]. http://mohawknationnews.com/blog/2016/05/31/indian-ring/

Today, it’s paid mercenaries. The Army Corps of Engineers are setting up the attack of the Lakota.

These are our burial grounds, our roots, our birthright. The corporation knows the Lakota occupy and never ceded their land that the corporation wants to expand their black serpent’s empire.
The surrounding cities do not want war. Many are joining hands with us.

The enemy is bewildered by us. The internet is the intersecting highway that is getting out the information to the world. The enemy waits to overcome us. This is the chink in their armour. The rest of the world is watching.

The Lakota are in possession of their land. The enemy has overwhelming weapons of mass destruction pointed at them. They will see flags and hear the drums.

As Crosby, Stills, Nash and Young sang: “Gotta get down to it. Soldiers are cuttin’ us down. Should have been done long ago. What if you knew her and found her dead on the ground. How can you run when you know?”  [Four Dead in Ohio].

Please post & distribute.
MNN. Nov. 20, 2016. The onkwe’hon:weh, original people, are defending the people and the spirit of the land; “The ghost of our murdered ancestors are all around us. They were the victims of the biggest holocaust ever committed. We are them and we remember them”.

The US military trained forces surrounding the Lakota and their friends and allies at Standing Rock have come to try to kill us. The corporation wants to break our tie with creation. They surround us with their lethal war toys and gangs to try to exterminate us. The planned onslaught will be avoided.
We stand together because we face the same losses – water, air, land.

The corpos don’t understand how our ancestors are standing with us to carry out the original instructions. They want to know weaknesses about our tie with creation that they can exploit. The corpos highly paid gunslingers do their dirty work. They have no mercy for a people who never did anything to them. The corpo predators don’t know what to do when the prey resists. They are ordered not to speak to us for fear of being influenced by the truth and being told that they are part of the ongoing genocide.

Pass-the-buck board room.
The corpos can’t deal with our greatest weapon, kariwi’iosta, the perfect truth. The world watches in horror and disgust at their anger and disregard for law and their thirst for a massacre.

Dakota Access Pipeline is trying to instigate a violent attack against innocent unarmed victims to start the war. They want to scare us or kill us with their arsenal of war machine.
It is said: “To fight we are too few” and “to die we are too many”. Everyone knows it is natural for man to defend themselves against annihilation.
Yes, Dakota Access Pipeline has physical control at Standing Rock. They are blood thirsty.

DAPL Boss: “Hey! Those Injuns should be deported!”
They gave the Lakota some hard shots. The people want to stand with the truth, while the corporation wants to continue the lies.
The American Indian Movement song is for all: