'People are Going to Die' -- Father of Sophia Wilansky Speaks Out 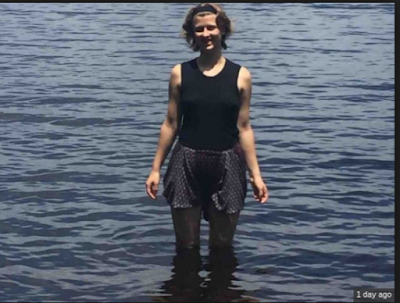 Wayne Wilansky is demanding action from the Obama administration on behalf of his daughter, Sophia Wilansky, who is in danger of losing an arm after allegedly being struck by a concussion grenade in North Dakota on Sunday. (Screenshot: Democracy Now!)
Sunday's brutal police assault against peaceful Dakota Access Pipeline activists left one water protector, Sophia Wilansky, at risk of losing an arm, and her distraught father spoke out Tuesday and Wednesday against the shocking show of force and demanded government action.
Wayne Wilansky, a 61-year-old lawyer and yoga teacher from New York City, spoke to a reporter in a Facebook live feed about his daughter's devastating injury, allegedly caused by a concussion grenade.
"This is the wound of someone who's a warrior, who was sent to fight in a war," Wayne said. "It's not supposed to be a war. She's peacefully trying to get people to not destroy the water supply. And they're trying to kill her."
Most of the muscle tissue between Sophia's left elbow and wrist as well as two major arteries were completely destroyed, Wayne said, and doctors pulled shrapnel out of the wound.
The Morton County Sheriff's Department has denied using concussion grenades or any equipment that could cause an injury like Sophia's, despite witness accounts and the shrapnel recovered by surgeons in Sophia's arm.
The police in Morton County, North Dakota are acting with such brutality, Wayne warned, that eventually "people are going to die."
Watch the full interview here:
Wayne's words were echoed on Democracy Now! by Brandi King, a U.S. Army combat veteran and fellow water protector who helped transport Sophia to the hospital.
"[Y]ou don't expect those kind of wounds happening when they're not in combat," King said. "That was just—just felt like it was a combat wound, you know, looked like it was a combat wound. She had shrapnel wounds. She didn't have any burns. Her arm was split open. Her skin, her flesh was ripped off of her arm. Her bones were broke."
A medic with Standing Rock Medic and Healer Council, who was on the scene on Sunday, made similar comparisons in comments to InsideClimate News: "I think of Birmingham, [Alabama], I think of Wounded Knee, it felt like low-grade war," Michael Knudsen said. "If we hadn't been there on Sunday night, people would have probably died. The use of water canons for eight hours on hundreds and hundreds of demonstrators in 22 degrees [F] is enough to kill someone."
Sophia's prognosis was made far worse by the fact that ambulances couldn't breach the police blockade of a main access road, which water protectors were attempting to clear when they were attacked by the Morton County Sheriff's Department, said Wayne.
Because of the blockade, it took over six hours for Sophia to finally reach the hospital in Minneapolis where she is undergoing multiple surgeries now, her father said. The harrowing delay very likely caused additional harm, Wayne added, because "every minute counts" with an injury as severe as Sophia's.
And Sophia's injury was no accident.
"The police did not do this by—it was an intentional act of throwing it directly at her," he said in a statement released by the Standing Rock Medic and Healer Council. "Additionally police were shooting people in face and groin intending to do the most possible damage."
Sophia fears that the pipeline company, Energy Transfer Partners (ETP), is going to kill her, requesting that her father stay by her hospital bed to protect her, Wayne said.
ETP head Kelcy Warren also told reporters early last week that he had offered to "reimburse" the government of North Dakota and Morton County for the costs of the militarized police force, but government officials denied receiving such an offer.
Wayne reported the attack on his daughter to the FBI and the Justice Department, he said, adding that the Justice Department is investigating. But in his description to Democracy Now!, the FBI appeared to behave as though they were investigating Sophia, rather than her assailants:

Sophia was [...] waiting to go to surgery. And they're basically keeping us prisoner inside her hospital room, waiting for a warrant, which never came. They didn't tell us what they were there for, for many hours. Eventually, I got to speak to a supervisor and learned that what they were looking for was her clothing. And I did eventually consent. I had taken her clothing back to my hotel room the night before, and I did consent to give them the clothing, eventually, after talking to the supervisors. I have an unwritten agreement, but I put it in writing anyway, that they will give me access to those materials so that I can test them, as well, and that they’ll preserve and not destroy that evidence, because I would want to see it, and I would want to have it forensically tested myself.

One FBI agent was wearing a jacket identifying him as a member of the Joint Terrorism Taskforce, the broadcast observed.
And despite the tragic result of the road blockade in Sophia's case, the Morton County Sheriff's Department apparently are now seeking to reinforce it by building a cement wall across the highway, water protectors said Wednesday.
"The police have built a wall between the Standing Rock Sioux reservation and Mandan/Bismarck on a public highway," commented Honor the Earth campaigner Tara Houska on Facebook. "Cutting off direct access to a hospital appears not to [faze] the people responsible for nearly blowing off a young woman's arm a few days ago."
In the wake of what the Indigenous Environmental Network condemned as "crimes against humanity" by the Morton County's Sheriff Department, the global outcry is growing.
A multiracial delegation of over 100 frontline community leaders are traveling to North Dakota and joining the Standing Rock Sioux Tribe in their fight; a fundraiser for Sophia's hospital bills has been flooded with donations; and even mainstream outlets such as the editorial board of the New York Times and the hosts of the daytime talk show The View are urging President Barack Obama to take action to reroute the pipeline and protect the Standing Rock Sioux tribe and its supporters.
Yet Obama is swiftly running out of time to act, and observers fear that the brutality of the Morton County Sheriff's Department in North Dakota may be a harbinger of what's to come under the looming Donald Trump administration.
"Standing Rock has for months been a frontline in the fights for indigenous sovereignty and against reckless extraction," argued journalist Kate Aronoff. "It may also now be the frontline of Trump's America."
This work is licensed under a Creative Commons Attribution-Share Alike 3.0 License
at November 23, 2016 1 comment: