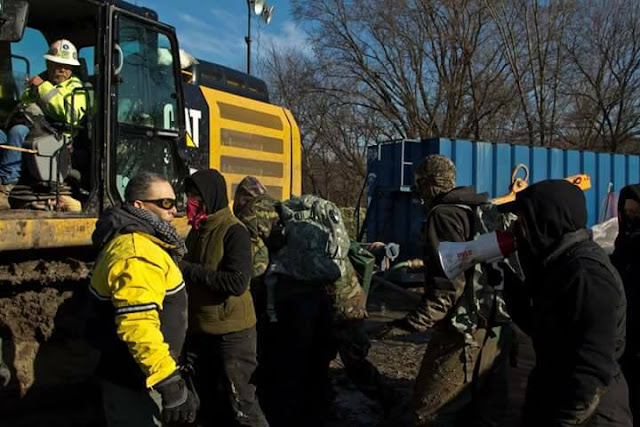 2 hrs ·
Today, two brave Water Protectors locked down to an excavator that was removing crucial boring sludge from the Dakota Access Pipeline site currently drilling under the Des Monies River.
They have been released from jail and are needing support for their bond and fees.
Donate to our legal fund! https://www.crowdrise.com/mississippi-st…/…/mississippistand
#DefendTheSacred #StandWithStandingRock #MississippiStand#EndWhiteSupremacy #WaterIsLife #IndigenousRising #BlackSnakeKillasRed Warrior Camp Sacred Stone Camp 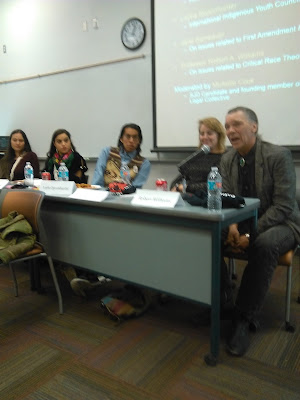 TUCSON, Arizona -- The water protectors of Standing Rock are galvanizing the present and creating new futures for Native Americans who return to the frontlines boldly, regardless of being shot with rubber bullets, hit with gushing water in freezing temperatures, attacked by vicious dogs and sprayed with tear gas and mace.

Standing Rock Camp Attorney Brandy Toelupe, speaking on a panel "Defend the Sacred, a Legal Panel on Standing Rock and the NO DAPL Movement," today at the University of Arizona Law School, described the lawsuits in progress against the police who have brutalized the water protectors who are defending the water of the Missouri River and the burial places.

Toelupe described the brutal attack by the Morton County Sheriff's Department and militarized police on the night of Sunday, Nov. 20, when the people were sprayed with fire hoses in freezing temperatures, shot with rubber bullets and projectiles, and maced.

"The violence is escalating to such a degree, that it is amazing that no one died that night," said Toelupe. She said that was the most difficult night. There were serious injuries that night.

Toelupe described a class action lawsuit filed yesterday. The class action suit points out that 200 people were injured, at least half were Native Americans. The attorneys are waiting for North Dakota federal court to schedule a hearing on the request for an immediate temporary restraining order to halt the unlawful and ongoing abuse by law enforcement.

"The tactics of law enforcement are becoming militarized," she said. "It is a very dangerous situation."

Toelupe is President of the Water Protectors Legal Collective, formerly named Red Owl Legal Collection. She said the attorneys are protecting the water protectors right to pray and their right to free speech.

Michelle Cook, Dine', founding member of the Water Protectors Legal Collective, described how she was traumatized by being present in the camp during the months of August and September. Cook is now readying to return to camp. She placed a bulletproof vest in front of the panel, a donation to the water protectors, as a visual statement of how serious the situation has become.

"That is part of the sacrifice that everyone is making," she said.

The protection of the water and burial places of Standing Rock are not just an issue for Standing Rock, but it impacts every single individual, she said.

Cook said it is an American issue, and an international issue, that such violence happens to Indian people

"My little sister had her arm fractured," Spoonhunter said, describing the sacrifices and courage of the American Indian youths in Standing Rock Camp.

"Our youth are so strong at this camp," he said, describing how they keep going back to protect the water. "We don't know what each day will bring."

"This is something that we have to deal with," he said, describing the constant presence of police and helicopters. "It is hard for our protectors to get adequate sleep."

Spoonhunter said the water protectors do not understand how they can do this, how police can inflict such cruelty with water cannons and dogs. How, he asked, could they still be doing this in the Twenty-first century. On Nov. 20th, the police did not stop as people were wounded. They continued the cruel assault into the predawn hours.

Still, he said, "We know what we are fighting for. We don't want the black snake to destroy our future." He said he wants the youth to grow up with a future where there is clean air and water.

University of Arizona Law Professor Robert Williams, at the Indigenous Law and Policy Program, spoke on the "absurdity of federal Indian law," and the reality of the Doctrine of Discovery.

"Those treaties were treaties of peace and friendship," he said.

Offering a message of hope, Williams said there is a different way to talk about this whole controversy and it is based on international law.

"That gives my heart hope."

"It is another way of saying we are savages," Cook said.

Layha Spoonhunter described the sovereignty, peace and beauty of the Standing Rock Camp. It includes the large camp Oceti Sakowin where thousands are camped, the original Camp of the Sacred Stones, and the Rosebud Lakota camp.

Spoonhunter said there are over 300 tribal flags located at the entrance. The security is located there, you will see our school, our media. "Many protectors have been there for over four months."

"This camp is decolonizing itself. We are not governed by a certain set of people." Spoonhunter said camp leaders do not dictate and they don't overrule the people. They listen to the youths. "They allow our input."

Spoonhunter said the Native people in camp are in fact "decolonizing ourselves."

"We don't have to rely on rules imposed on us by the federal government."

Encouraging others to go to camp if they can, he said there you will see the horseback riders, cooks, people who run the schools, and elders. In camp, they also recognize that young people do have a role. They recognize the Two Spirit People. "They define themselves in that masculine and feminine identity." He said within the camp, people are healing of homophobia.

The people are witnessing something that has not happened since 1876. Within the camp, tribes that were once traditional enemies have come together in peace. Standing Rock Sioux Chairman Dave Archambault carried in the Crow flag as a demonstration of how former enemies are now united at Standing Rock in this struggle.

Spoonhunter said the people are united in this common purpose of clean water and clean air. Each day brings something different. Yesterday, the people were sledding and making snowmen in camp.

"Each night you get to see stars," amidst the airport lights of Dakota Access Pipeline, he said.

"It is beautiful. We don't have to rely on corporations. The American dream is happening."

Cook described it as, "The rising of the Indian spirit." It is a place where there is enough food and enough shelter. There are doctors and lawyers. "Indian people can govern ourselves."

"This is the legacy of Indian people. We have been able to take care of ourselves. Indian people are able to see what their power is."

The love for their culture and the way of life is more powerful than the guns, she said.

Toelupe urged others to make phone calls to President Obama, and their Congressional representatives.

During questions, Professor Williams described the permitting process and its role in what has happened at Standing Rock. Pipelines run across private lands and when the pipeline crosses federal land, or navigable waterways, the Army Corps must obtain federal permits. When it applies for an environmental impact statement, the EIS is applied for in piecemeal fashion, one piece at a time.

Williams pointed out that the snow and cold were the excuse of the North Dakota Governor to declare an emergency evacuation of the camp yesterday.

But Williams said that the true threat to public safety is when Indian people start living by their own ways.

Toelupe said the Water Protectors Legal Collective is working on other lawsuits currently. These include the violence of Dakota Access Pipeline security on September 3, when people were bitten by dogs and maced. People cried out for the police and none of the police nearby responded.

Currently, over 500 water protectors have been arrested. Toelupe said the court cases could go on for years and the attorneys are committed to seeing the cases through the courts.

Among those cases is the case of Red Fawn, who was charged with attempted murder. Cook said it is "malicious prosecution."

Spoonhunter said Red Fawn's charges were dropped yesterday in Morton County and refiled in federal court. She is now charged with possession of a firearm by a convicted felon, he said.

"The charges are bogus." Spoonhunter said police and prosecutors claimed Red Fawn fired three shots. However, her arms were pinned down by three police officers, as shown in the videos.

Spoonhunter said she was targeted because she has been tremendously influential with the women and youths.

"She is a strong individual."

Cook urged divestment and encouraged those at home to become active in the divestment campaign aimed at those who plan to profit from the Dakota Access Pipeline.

Jane Bambuer, associate law professor at the University of Arizona, described the impacts of the resistance and resilience. She described the novel approach of water protectors around the world who "checked in" on Facebook, to protect those who were actually present at Standing Rock from detection.