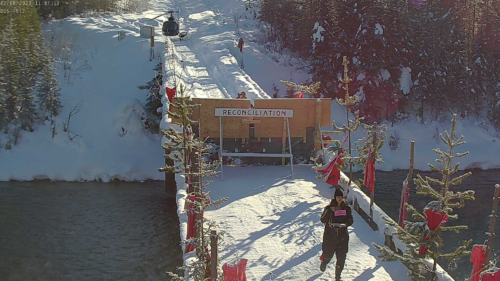 February 8, 2020: There have been 11 arrests at the 27km in Gidimt'en territory. The 4 people arrested yesterday will appear in court on Monday in Smithers, BC.
Video
Unist’ot’en Territory, Feb 8, 2020 -- Unist’ot’en condemns the violations of Wet’suwet’en law, Canadian law, and of the United Nations Declaration on the Rights of Indigenous Peoples (UNDRIP) committed by the RCMP on February 6th, 7th, and 8th 2020 on Gidimt’en Clan territory against camps located at 27, 39, and 44 kilometers on the Morice Forest Service Road.
These violations were committed by the RCMP on behalf of Coastal GasLink’s (TC Energy) interlocutory injunction and the existence of an ever-expanding and undefined exclusion zone. Coastal GasLink’s injunction does not prohibit travel on the Morice Forest Service Road nor does it prohibit residence at the Unist’ot’en village or any other Wet’suwet’en homesites on our land.
Unist’ot’en demands the RCMP will not evict the Unist’ot’en Healing Centre. The RCMP has no jurisdiction to enter the Healing Centre without our Free, Prior, and Informed Consent. Even under colonial law, the RCMP cannot enter or search our Healing Centre without a warrant.
International public support is called for to ensure the safety of the Healing Centre. People living and receiving treatment there are not in violation of CGL’s injunction, nor is the Healing Centre itself in violation of the injunction. The Healing Centre exists to support the self-determination and healing of our people and is unrelated to CGL’s work and the injunction.
Unist’ot’en is outraged over the use of excessive force by the RCMP, including the unnecessary use of heavily armed tactical teams deployed by helicopters to surround Gidimt’en camp at 44 km, use of snipers, and deployment of K9 units. We know that in January 2019, RCMP were authorized to use genocidal lethal force, arrest children and grandparents, and apprehend Wet’suwet’en children in response to our peaceful presence on our lands.
Throughout the enforcement of CGL’s injunction, media and legal observers were illegally corralled and threatened with detention and arrest for doing their jobs. Freedom of the press is protected under Canadian law but journalists were prevented from documenting the RCMP militarized raids on Gidimt’en territories. The RCMP attempted to evict residents from Chief Woos’s cabin. The RCMP and Coastal GasLink also partially dismantled Gidimt’en camp infrastructure and property. This property belongs to the Gidimt’en Clan and the RCMP has no legal authority to destroy it.
On February 8, the exclusion zone was illegally expanded from the 27 KM to the 4 KM mark, and now encompasses the majority of Gidimt’en territory. As a result, eleven people including legal observers were illegally arrested from the 27 km cabin. The exclusion zone has been created by the RCMP to force Wet’suwet’en land defenders off ourland. It is a colonial and criminalizing tool to illegally and arbitrarily extend RCMP authority onto our lands. The massive exclusion zone, completely under RCMP authoritarian discretion, falls outside the injunction area. Chiefs and Wet’suwet’en people are illegally being denied access to their own territories.
We urge Canada to adhere to the UN Committee for the Elimination of Racial Discrimination (UN CERD) directives and to halt the Coastal Gaslink project, seek Free, Prior, and Informed Consent from the Wet’suwet’en Hereditary Chiefs, withdraw RCMP from our territories and ensure that no lethal weapons or force be used to forcibly evict Wet’suwet’en people from our lands.
MEDIA CONTACTS:
Harsha Walia, Independent Comment from BC Civil Liberties Association: Hwalia8@gmail.com
Irina Ceric, Kwantlen Polytechnic University, Independent Legal Comment: Irina.ceric@gmail.com
Noah Ross, Independent Legal Comment:
noah.ross.j@gmail.com
Dark House (Unist’ot’en):
tsewedielh@gmail.com

4 pm - There have been 11 arrests at the 27km in Gidimt'en territory. The 4 people arrested yesterday will appear in court on Monday in Smithers, BC.


1:28 pm - At least 4 arrests reported at 27km, Gisdewe cabin. RCMP held media back so they couldn't clearly observe what was happening. Our understanding is several people barricaded themselves in the cabin.

12:52 pm - A big piece of machinery with a claw has moved the rolled vehicle at 44km. CGL workers are now swarming the pallisade.

12:08 pm - RCMP and DLT have left in their helicopters. No police on the bridge. (Helicopters appear to be Silverking)

11:34 am - Unist'ot'en matriarchs and indigenous supporters are in ceremony and are refusing to talk to police. They are burning the injunction and there is a traditional funeral pyre burning with a homemade flag on top that reads "Reconciliation is Dead"

11:05 am - 2 helicopters have landed across the bridge from 66km, on the Gidimt'en side. One is DLT, the second is RCMP.

10:54 am - Two regular RCMP supported by one tactical member approached Woos' cabin and knocked on the door - they informed those inside that the exclusion zone was extended, and that if they need food or water they can be provided, or they can be escorted out without arrest.

9:50am - A large convoy of RCMP and industry has headed up the road to 27KM - around 40 vehicles. They seem poised to continue their violence, despite the fact that Wet'suwet'en Hereditary Chiefs have a meeting scheduled with RCMP at 27KM at 10am.