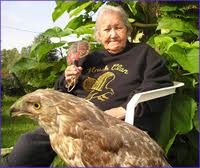 Censored News shares today the powerful words of Seneca Hawk elder Edna Gordon, 91 years old. Written out in longhand, here are her words for you, readers of Censored News.

By Seneca Hawk Elder Edna Gordon, 91 years old
Censored News
http://www.bsnorrell.blogspot.com/2012/06/seneca-hawk-elder-edna-gordon-surviving.html
Our Native People have withstood the trials and tribulations due to their Sovereignty (their Freedom) as the truth for Survival.

Perfect Order was generously Bestowed, there is great Security in knowing.

After the Darkness of Night, Precious Light forever marks the Way.

We have forgotten how to be patient, loving, with faith and hope, and trust in the Creator's greatest truth for World Peace.

Our Cultural Reflections of Life is an Ancient Guideline for Wisdom, Earth Law, Visions of Peace and Ever-Changing Visions of time.

We need to change our different Visions and Realities of Life to Survive on the Pathway to Peace.

The Principle of Peace is Honor, Freedom and Justice under One Common Law of the Creator. In the Changing Era, the Heart Beat no longer pounds with the spirit of the tribal drums and the Mind becomes clogged like the polluted waters, losing a source of Faith, of Hope and of Life.

VAL D'Or, QC - On June 5 2012, Norman Matchewan, a youth spokesperson for the First Nation of Mitchikanibiko'inik (the Algonquins of Barriere Lake), was acquitted on what community members alleged all along were politically motivated charges. Matchewan was acquitted of mischief and obstruction of justice stemming from a 2009 blockade protecting his people’s territory from illegal logging.
Matchewan was defending the forest from logging that had been unlawfully authorized by Quebec’s Ministry of Natural Resources. The logging was also a violation of a 1991 resource co-management agreement signed in 1991 between Barriere Lake, Quebec and Canada.
“Too many native peoples are criminalized for defending their land,” said Matchewan following the acquittal, “Today is a big victory for our community. We will not be intimidated by trumped up legal charges and court battles. We will always protect our land and custom for our future generations.”
Yves Paquette of AbitibiBowater, the forestry company behind the cutting, incriminated himself by repeatedly lying during his cross-examination. Paquette claimed that he encountered no police on the site and was not able to enter the site because the logging road was entirely blocked by the cars of the Barriere Lake community members. However, after seeing video evidence that refuted the latter claim, Paquette also admitted to speaking to two intelligence officers from the Sûreté du Québec (SQ).
Vincent Larin, of the Quebec Ministry of Natural Resources, admitted on the stand that logging permits were issued without any consultation by his Ministry of the family groups whose territories were being logged. Moreover, after first claiming that the cutting permits could not be altered once they were electronically signed and entered in the Ministry’s computer system, he presented the Court with a cutting permit that was substantially different than the version that had been disclosed to the defense.
“They got caught in their own lies,” said Matchewan following the trial. “The Crown’s case, in the end, was so weak that we were not even required to present a defense,” said Jared Will, the lawyer representing Matchewan at trial.
Last year, the community of Barriere Lake discovered a copper and nickel exploration project at the heart of the hunting and fishing area of several Barriere Lake families. The mineral claims, named the Rivière Doré property by Cartier Resources, were recently sold to Copper One Inc., based in Montreal. Neither the Quebec government, nor Cartier Resources had met their obligations to obtain the consent of the community before beginning work on the site.
Matchewan was a key voice in the community’s successful struggle to stop the exploration activity by Cartier Resources. Soon after he became active in the anti-mining campaign, he was issued a summons to appear in court for the logging blockade that occurred over two years earlier.
For more information, please contact: Norman Matchewan, (819) 435-2171 or his lawyer, Jared Will, (416) 835 2075.
==========
==========

Forecast for Rio+20: ‘Green Capitalism’ as Indigenous Peoples press for the Rights of Nature

Indigenous Peoples are carrying the mandates established in Cochabamba, Bolivia, to Rio+20, the United Nations Conference on Sustainability in Rio de Janeiro, Brazil, during June. However, before the conference even begins, the prospects are dismal, as Bolivia warns of “Green Capitalism.”
The forecast is that the profiteering countries of the world will continue to stalk and destroy nature for profit.

Indigenous Peoples increasingly view the United Nations as a place for empty rhetoric and no results, with scam climate solutions, distractions to waste time, and a pattern of appointing people who can be bought and paid for by profiteering corporations and puppet governments.

At Rio+20, Bolivia is carrying forward the protocols established at the World Peoples Conference on Climate Change and the Rights of Mother Earth in Cochabamba, Bolivia, in 2010. The goal is the elimination of poverty through redistribution of wealth and restoration of the earth’s equilibrium.

Lakota Chief Arvol Looking Horse said he will travel to Rio de Janeiro for the gathering. With prayers planned in many regions, Chief Looking Horse, 19th generation Keeper of the Sacred White Buffalo Calf Pipe, urged prayers for an energy shift to bring about healing on in June, 2012.
"On June 21st I will pray with thousands of People at the United Nations Conference on Sustainable Development or Rio+20 in Rio de Janeiro, Brazil." Read more: http://bsnorrell.blogspot.com/2012/05/chief-arvol-looking-horse-unite-for.html

On the Kari-Oca Caravan, Rio is the destination. As it passed through Peru during the first week of June, Franklin Toala and Mario Santi, two leaders from the Amazonian Kichwa community, were onboard.

Toala says that in government-led conservation programs in Ecuador, there is “no real conservation.” He says this because in Ecuador, oil exploration can take place even in forests that are placed under protection.

A priority at Rio+20 will be the right to Free, Prior, and Informed Consent, a critical theme in Ecuador’s indigenous movement. FPIC means that any entity that wants to begin activities on indigenous lands and territories, must first have the approval of the community. More: http://karioca-caravana.org

Earlier, Indigenous Peoples from around the world established the Rights of Nature in Cochabamba in 2010, mandating the creation of an international climate court of justice and the elimination of the false soulution of carbon credits.

Now, as Rio+20 seeks to eliminate serious climate discussions from the agenda of sustainability, Bolivia reiterates the Rights of Nature, stressing that world leaders must not fail to establish real protocols to reduce greenhouse gases.

Bolivia said in its proposal to Rio+20 that the carbon market schemes, which allow the worst polluters to continue polluting, must be eliminated and replaced with real solutions. The worst global polluters include coal-fired power plants. Further, to restore balance, and ensure sustainability, the World Bank and International Monetary Fund must be replaced.
“An International Tribunal of Environmental and Climate Justice must be established to judge and sanction crimes against nature that transcend national borders, violating the rights of nature and affecting humanity,” Bolivia said in its Rio+20 proposal, based on the Cochabamba protocols.

Bolivia also warns of ‘Green Capitalism’ at Rio+20. “Green” capitalism will bring about natural resource grabbing, displacing humanity and nature from the essential elements needed for their survival. The drive for profit, instead of reestablishing harmony within the system, will provoke even greater imbalances, concentrations of wealth, and speculative processes.”
Out of control development must also cease. “When growth begins to break that balance, as we see with global warming, we can no longer speak of it as development, but rather, the deterioration and destruction of our home.”

There must be equilibrium of the three pillars of sustainable development – social, economic and environmental. “The so-called ‘developed’ countries must reduce their levels of over-consumption and overexploitation of resources of the world in order to reestablish harmony among human beings and with nature, allowing for the sustainable development of all developing countries.”
Mankind must recognize the rights of nature and not just the rights of human beings. “We have to end the system of consumption, waste and luxury.” Forests are essential to the balance and integrity of planet Earth.

Further, a sustainable future means food production by farmers, Indigenous Peoples and small agricultural producers, along with access to land, water, seeds and credit.
“Without water, there is no life. Humans and all living things have the right to water, but water also has rights,” Bolivia said. The altered hydrological cycle causes desertification, lack of food, temperature increase, sea level rise, migrations, acid rain, and physical-chemical changes that could provoke the loss of genetic and species diversity, damaging the health of ecosystems.

Dr. Peter Carter at the Climate Emergency Institute warns of the dismal outlook and failed vision planned for RiO+20, as the agenda eliminates the crises of the climate and the environment.
"The only course of action for real human beings is to abandon all confidence in the criminal corrupt international world order and push ahead as best they can with the Cochabamba Peoples Agreement and the traditional customary laws and Earth respecting world order of the global indigenous peoples. They always were the real leaders of the world," Dr. Carter said. Read more: http://www.bsnorrell.blogspot.com/2012/06/truth-about-rio-forecast-for-rio20.html

For permission to repost this article: brendanorrell@gmail.com
at June 11, 2012 1 comment: