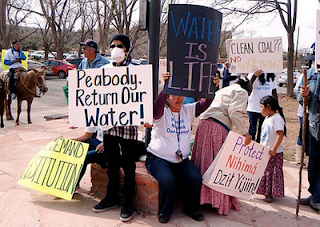 A new PR firm, and a slick green hoax, are aimed at the theft of Navajo water rights and keeping one of the nation's dirtiest coal fired power plants polluting on Navajoland.

Slick public relations campaigns are underway for the theft of Navajo water rights, and a green scheme for solar and wind projects. Both schemes are designed to keep one of the nation's dirtiest coal fired power plants operating on the Navajo Nation, the Navajo Generating Station.

The Navajo Water Commission has hired a public relations firm to try and deceive Navajos into giving up their water rights to the Little Colorado River. The firm Scutari and Cieslak was hired following the protests over the proposed water settlement.

The Little Colorado River settlement scheme is designed to give away Navajo water rights and continue to pour water into the coal fired power plant, the Navajo Generating Station near Page, Ariz, one of the dirtiest coal fired power plants in the US. The scheme is also to provide water for non-Indians living luxury lifestyles in southern Arizona's dry and thirsty desert cities.

The Navajo Generating Station, one of three on the Navajo Nation, is among the dirty coal fired power plants in the US responsible for the melting of the Arctic and global warming. Arctic villages are dropping into the sea and polar bears, walruses and other wildlife dying as their habitat vanishes.

This scam water rights deal was promoted by Arizona Senators John McCain and Jon Kyl, who apparently believed it would be as easy to dupe the public about this, as the so-called Navajo Hopi land dispute, which was actually devised to clear Navajos from their land for Peabody's coal mining on Black Mesa, which feeds the Navajo Generating Station.

In other news of the public relations spin promoting the dirty industries on Navajoland, the Navajo Nation has engaged in a carbon market scam with SRP, the Salt River Project, which operates the dirty coal fired power plant Navajo Generating Station.

The carbon market schemes, and carbon credits, are scams which allow the world’s dirtiest polluters to keep on polluting.
In this case, the Salt River Project will spend $220,000 buying renewable-energy credits. The Navajo Tribal Utility Authority is a player in this green scam. To spin public opinion, there's dollars for solar and wind projects.

Aside from the slick PR, and pretty green goals designed to dupe the public, the real purpose is to allow the dirty power plant Navajo Generating Station to continue operating on Navajoland.

Meanwhile, across the west, non-Indian attorneys are attempting to convince Indian Nations to enter into water rights settlements, to give away their water for the benefit of non-Indians and corporations. Non-Indian attorneys, often employed by the tribes, are attempting to deceive Indian Nations into giving up their expansive water rights for future generations. This means severing expansive rights under the Winter’s Doctrine.
Navajo Marshall Johnson, lead organizer with To Nizhoni Ani is among those opposing the Little Colorado River settlement.
“This settlement is being fast tracked to satisfy Kyl and McCains’ efforts to continue the legacy of free and cheap electricity and water delivery to central and southern Arizona. It’s not about providing much needed services to the Navajo people as they claim. This should really be called the ‘Keep Navajo Generating Station Open Settlement Agreement.'"
Due to the collapse on the news industry, online aggregators of Indian news promote hoax news stories of politicians and PR firms, further promoting the destruction of the land, the poisoning of the air and water, and assault on the human rights of the people.

SAN FRANCISCO -- AIM-WEST, a non-profit community based inter-tribal organization in San Francisco, cordially invites you to an AIM Photo and Art Exhibit in recognition of Anniversary of “Reign of Terror in South Dakota, 1973-76.
AIM-WEST is host to an Photo and Art Exhibit depicting political prisoner, Leonard Peltier, the American Indian Movement (AIM) and bay area Indigenous activism on the anniversary of what is referred to as the “Reign of terror” in South Dakota in the period 1973-76 when over 60 AIM members and supporters were killed and nobody held accountable.
The location is at Arte International Gallery, 963 Pacific St. (North Beach between Powell and Mason St) starting from June 15-30, and a reception on June 26th in recognition of political prisoner Leonard Peltier, being held for over 37 years resulting from a shoot out at the Jumping Bull compound in Pine Ridge Reservation, near Oglala, in 1975. The Gallery will also have paintings by and photos of Mr. Peltier, photos of a history of the American Indian Movement (AIM), and a display during the Occupation of The Rock, Alcatraz Island, from November 1969 until June 1971.
Internationally renowned photographers Ms. Michelle Vignes, Paris, France, and now resides in San Francisco, and Ms. Ilka Hartmann, Berlin, Germany, now in Marin County respectively, have offered to share their photos they have documented of Indigenous activism over the decades. Rigo 23, another internationally known artist and with local credentials, will be contributing his recent works toward the two weeks of awareness and concerns of Indigenous peoples living in North America.

For more information call 415-577-1492 and see website at www.aimwest.info
In addition;
http://www.aimovement.org/
http://www.whoisleonardpeltier.info/
at June 14, 2012 No comments: