Why would the Navajo government support the slaughter of the sacred wild horse?

"The horseback riders should understand the prayer and song as to why there is such a horse." -- Leland Grass


I don't understand why our own Navajo Nation government President Ben Shelly, Speaker of the Council Johnny Naize and  Dine' Horseback Trail Rider bosses support the killing of wild horses to slaughter house after they are rounded up.

In dine' culture, The horses are the one help us dine' through struggles to extreme survival from pulling our wagons, hoe, plow our cornfields and even help us through tough drought to haul waters to sheep camps, even fed us from trading posts.

The horseback riders should understand the prayer and song why their is such a horse. Round them up and support the evil way of genocide of our mother earth holy being connect with nature elements- spiritual connection displaced in process of elimination.

The BIA is the one blame for drought, not Dine' people and its animals and wildlife. BIA hurt our prayers and way of life in 1930's and it continues, omen our lands.

Do you see any USDA Agriculture near any of our chapter houses. NO! BIA stole our agriculture way of life from Navajo land and gave us Chapter Houses instead. All you Dine' horseback Bosses and riders, I have seen your horses you rode in, they are same being just like the other in wild but tamed, when you pray you are not only praying for your every own horse but others too.

Why do you carry Horse Song (or even ask for horse song in your trail ride event) and want to kill numerous horses of your land that is sacred to all living. Today, early Tomorrow morning, go to your beautiful horse and ask why he is sacred the answer is going come back how you treat him with this you are going make your decision if you are going kill his ego as you will support the cause.

Call Navajo Nation Department of Agriculture for more info 928-871-6605 for Planner, Roxy June and Manager, Leo watchman. all -you every day people make a request to stop all horse slaughter and make the round up for training schools for youth and even rehab on dine'Tah- give it back to the land. No killing of our sacred animals.

Believe me our Dine' elders and medicine people don't want the killings. This was one of the talks during a traditional meeting at Black mesa near below Peabody.

We Dine' riders have done good for Ben Shelly to get elected for presidency in last election. We did it with a horse prayer and to ceremony with our horses so he could win. Today, he completely took sides on a matter further away from our wants and needs -- with that we are backing away our songs and prayer from Indian Government politic rides any longer. We have learned.

Read more on the horse slaughter on Dine' Land at Navajo Tiimes:
Excerpt from Navajo Times "According to Grass's oral history, when the Hero Twins, known as Naayéé' Neizghání and Tóbájíshchíní, journeyed to their father, The Sun, to rid the Fourth World of monsters, they not only acquired knowledge from their father to defeat the monsters, but also saw at their father's lodge, the horse. - See more at: http://navajotimes.com/news/2013/0813/080813hor.php#sthash.Lscrjwuu.dpuf


A promotional short for the documentary film, 'In the Spirit of Po'pay'. Native American hero, Po'pay was the leader of what is being called, "the First American Revolution", The Pueblo Revolt of 1680.

Votán IV.
D-Day Minus 7.
Revelations of what the Zapatista heart admires in others, announcement of some exemptions to the Zapatista Little School, and some pointless advice that no one is going to follow.
August of 2013.
Okay so, there’s not much left now. I mean that there are not many days left until the Little School starts, not that we don’t have much more to do and say.
If anyone out there can find a school that assigns each individual their own teacher, 24 hours a day, a school that is laicized [secular] and free of cost, that provides lodging and meals during the teaching and learning, well good luck.
Read more »
at August 10, 2013 No comments:

Filmmakers Liz Rogers and Kevin Flint go to South Dakota following a story about Uranium contamination only to discover that the problem flows much farther, and runs deeper than they could have imagined. Three years and thousands of miles later, "Hot Water" tells of those impacted by Uranium mining, atomic testing, nuclear energy and the contamination that runs through our air, soil and even more dramatically, our water. 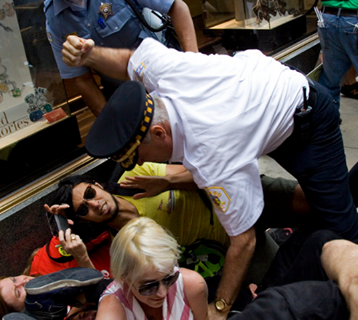 Arrests happening now in Chicago as protesters gather at the posh hotel of ALEC's event. The right-wing infrastructure source of ALEC is a profit-driven agenda which includes "K-12 Inc" a private company seeking to legislatively take over public schools, and aligned with the tobacco industry, the oil industry, and the pharmaceutical industry. Privatization of schools is a $500B industry, which also seeks to eliminate teacher's and janitor unions. http://owl.li/nOprf -- Deep Green Resistance
at August 10, 2013 1 comment:

"This is all evidence of the 'shadow government' at work. The non-Navajo controlled 'secret government' that ultimately rules us." Ed Becenti, grassroots Dine'

Here are three important documents. This is a fight for the very soul of our tribal government. The first is from Bennie Williams (who was recently forced to retire as Water Code Administrator by Tariq.) It his statement of concern to the Resources Committee about the harassment and retaliation over 2.5 years from mostly Najam Tariq, who basically destroyed Bennie physically, mentally, and emotionally.

The second is an August 8 memo from Jack Utter to Fred White and Katherine Benally about the continuing contempt of Tariq against the Resources Committee's directives.

The third, dated for next Monday the 12th of August, is Fred White's memo on how he's going to fix the problems arising from the unlawful takeover of the Water Code by Tariq 2.5 years ago. He's taking responsibility for the Water Code in his office, and appointing Tariq to be Water Code supervisor. The word is that if Fred succeeds with this bogus memo, Tariq is going to serve termination papers on Jack Monday or shortly thereafter.

This is all evidence of the 'shadow government' at work. The non-Navajo controlled 'secret government' that ultimately rules us through People like Pollack, etc. Tariq is their most visible agent. No respect for the Navajo people, for our caring elected leaders, for right over wrong, it's just about abuse, exploitation, and control.

Tariq is an alleged thief and exploiter of the Nation. He controls the DWR like his own little Pakistan. The 'shadow government' has to be brought to a halt here, as a lesson to Pollack, Hoover, Navajo Generating Station, Salt River Project, Jon Kyl, and others.  The Navajos are going to govern themselves, not the infiltrators into our tribal government.

Statement of Concern By: