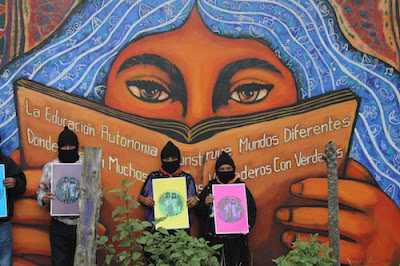 Communiqué from the Indigenous Revolutionary Clandestine Committee – General Command of the EZLN, announcing fly-overs by military airplanes in the zones of the five caracoles. [Audio Transcription]

Communiqué from the Indigenous Revolutionary Clandestine Committee – General Command of the EZLN, announcing fly-overs by military airplanes in the zones of the five caracoles. [Audio Transcription]
http://enlacezapatista.ezln.org.mx/2013/08/15/communique-from-the-indigenous-revolutionary-clandestine-committee-general-command-of-the-ezln-announcing-fly-overs-by-military-airplanes-in-the-zones-of-the-five-caracoles-audio-transcri/
Compañeros, Compañeras, Good day. We always make our appearance in urgent situations.  Allow me to read this communiqué that we are issuing at this time. It says:
August 14th, 2013, mid-morning.
Communiqué from the Indigenous Revolutionary Clandestine Committee – General Command of the Zapatista Army for National Liberation, Mexico.
To the people of Mexico:
To the people of the World:
To the Sixth:
To the students of the Zapatista Little School across the world:
Compañeros and Compañeras:
We are notifying you that on August 12th and 13th 2013, during the night, military planes were doing flyovers over the zones of the five Zapatista caracoles, the places where they are teaching the course “Freedom According to the Zapatistas.”
Maybe, serving their masters, the Mexican soldiers are spying for the US government, or, the North American planes are doing the work of spying directly. Or maybe the soldiers want to see what is taught in the Zapatista communities that they have attacked so much, but have been unable to destroy.
We say to the government of Peña Nieto, that if your soldiers want to learn in the little school, they should ask to be invited. We won’t, however, invite them. But then they can use the pretext that they are spying because we didn’t invite them. That’s all.

Arguments will begin in Colville Tribal Court on August 21 from 9 a.m. to 11 a.m. regarding a Civil Complaint filed by Yvonne L. Swan on May 23, 2013 against fourteen (14) tribal members who were then seated on the Colville Business Council—John E. Sirois; Michael O Finley; N. Lynn Palmanteer-Holder; Brian Nissen; Richard Swan, Sr.; Jim Boyd; Luana Boyd-Rowley; William Nicholson, II; Darlene Zacherle; Joseph Somday; Nancy Johnson; Ernest Brooks, III; Benjamin Marchand, Jr.; and Andrew Joseph, Jr.
Over the past 18 months elected representatives refused to hear Colville tribal voices of concern, a denial that compelled several people to organize as Colville Members for Justice and eventually raise their voices on behalf of 2,700 members who signed a petition asking the Business Council for the remainder of the $193 Million trust settlement.
The settlement in question resulted from a claim filed against the Secretary of the Interior (Kenneth Salazar et al) through US District Court, No.: 1:05-CV-02471-TFH for mismanagement of the Tribes’ trust funds and non-monetary trust assets. This entire mismanagement took place over the past 100 years and the actual amount of losses that affected the people is unknown to the general membership.
The Complaint asks the Court to stop Sirois et al from spending or planning to spend any of the remainder of the $193 Million trust settlement until this case is resolved and the membership of the Tribes is vindicated. It also asks that the Council give a full accounting of the 2012 and 2013 status of the settlement including any interest earned and provide a complete description of any/all expenditures to date.
Other relief asked of the Court is to Order the Respondents to direct all programs and departments to return all monies taken from the people in 2012 and afford them due process. After the 2012 Referendum passed in favor of members to receive an additional 30% in addition to the original 20% the Council initially decided to give them, the Council retaliated by passing an Emergency Resolution on August 20, 2012 stating in part “…Holds are allowed for all Tribal programs, including but not limited to the following…” and it lists 14 programs including BIA, Housing, and Tribal Court. Plaintiffs question the legality of this Resolution and will address it in Court.
Sirois et al had the Office of Reservation Attorneys file a Notice of Appearance on their behalf, but tribal members are asking the Court to exclude them from the case due to conflict of interest and to Order Sirois et al to retain private counsel.
Our argument is based on precedents set dating back to the 1950s whereby tribal
representatives immediately informed the members and allowed them to vote; and, in
those instances up to 1994 all claims settlement monies were immediately disbursed equally to each enrolled tribal member. The tribal Council sets policy and policy is expected by the membership to follow tradition.
Members emphatically hold that this settlement is compensation to the Tribe and the Tribe consists of its membership. If the Council really cared for the people, the people would not have had to resort to a class action against them in order to be heard.


“The reason this Claims issue became so heated is due to lack of complete and truthful information. I've had to sift through information and toss out untruths for months in search of the truth. This shouldn't be happening. Sure, nobody's perfect, but at least we can be open and honest about tribal matters. We ask honest questions and expect honest answers.
Anything that has to do with our land and life on this Reservation is of utmost importance to each and every one of us. The majority of people I’ve talked with don’t trust the Council because they feel the Council has mismanaged our funds just as much as the federal government mismanaged our resources.” –Yvonne L. Swan


For Immediate Release
from August 14 until August 21