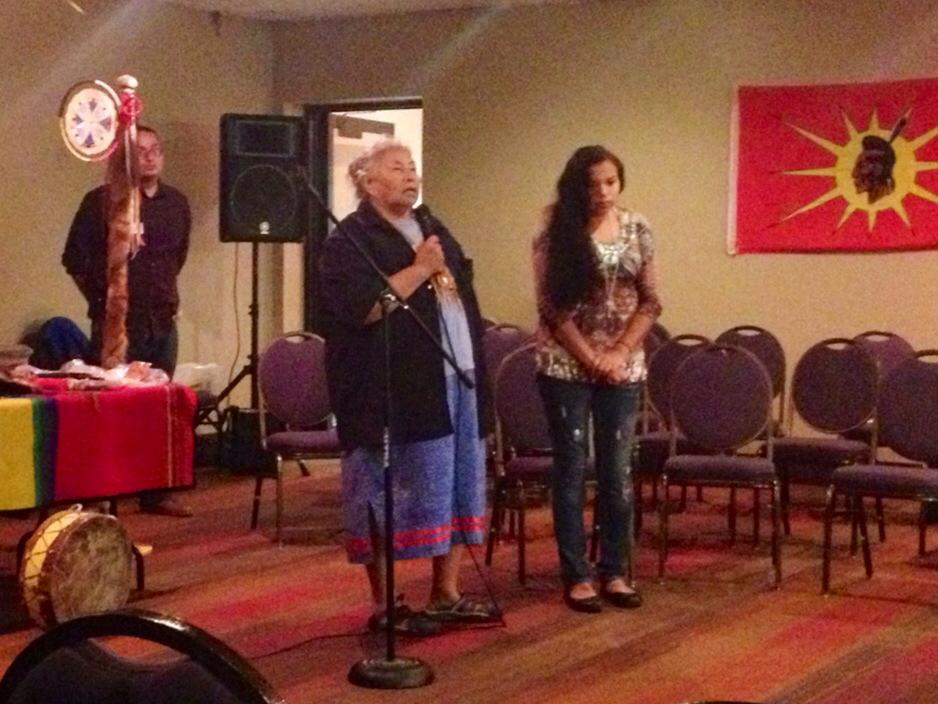 PICKSTOWN, South Dakota -- The White Buffalo Calf Woman Society was among those calling for a halt to the violence against women and children in the Great Plains and Indian country as a result of pipeline and energy development "man camps."
Over the weekend, Dakotas, Lakotas and others from the region gathered for the "Protect the Sacred II Conference: Protect the Women and Children From Keystone XL Violence Say No To Man Camps." It was held in Oceti Sacowin Territory in Pickstown.
The gathering is the latest to organize against the proposed Keystone XL tarsands pipeline and the violence already present in the Dakotas from oil and gas drilling "man camps."
“This gathering helps us prepare for the onslaught of violence against women and families that energy development brings against our people. These so-called man camps increase alcohol and drug related crimes and violent crimes, including sexual assault and human trafficking. We want to be sure that the people are aware of violence against women in this context, and begin to prepare for what our relatives in the North are already going through,” said Janet A. Routzen, the Society's director.
The White Buffalo Calf Woman Society is a domestic violence shelter and advocacy organization for victims of violent crime, including sexual assault and stalking. The organization has been in existence for thirty-five years on the Rosebud reservation and provides critical services to the Rosebud and Pine Ridge reservations.
The Native Women's Society of the Great Plains filed online reports during the conference, August 16 -- 17, 2013.
Faith Spotted Eagle was one of the coordinators of the Protect the Sacred II conference. Brittany Poor Bear, a young woman with the Brave Heart Society at the opening of the conference, helped open the conference with a prayer all in Lakota.
Lisa Brunner of Nation Indigenous Women’s Resource Center, said, "Men treat women like they do Mother Earth, Mother Earth as they do women. They think they can own us, buy us, rent us, rape us, poison us, use for recreation, blow us up and kill us. You cannot stand for one and not the other, for we are the same -- creators of Life."
Melissa Merrick of Spirit Lake Victim’s Assistance and Summer Lunderman of White Buffalo Calf Women’s Society of Rosebud helped coordinate the conference to bring awareness to tribal communities of the dangers of the proposed man camps of the Keystone XL TarSands Pipeline. The proposed camps will be near Rosebud, Cheyenne River and Yankton Sioux reservations
Jane Kleeb of Nebraska Bold, spoke of the people in Nebraska that are against the proposed pipeline. They have been essentially challenging the way Nebraska is accepting the pipeline. Awareness to and organization of land owners along the proposed route of the pipeline has been one of the group’s methods. Montana and South Dakota have 99 percent of landowners signed and 35 to 40 percent of Nebraska land owners signed.
Sadie Young Bird, of the Fort Berthold Coalition Against Domestic Violence, of New Town, North Dakota, near the hub of the Bakken oil range, spoke to the gathering about the issues they face with the oil development and the man camps they currently have. It is home to the Hidatsa, Arikara and Mandan Nations. They have a population influx of 30,000. The tribe doesn’t have a good collaboration with the county law enforcement. The sex offenders list has increased and meth use has increased.
"Nobody told us what will happen, we learned it on our own," Young Bird said. Her program had 230 cases in 2012 and so far this year they have had 160 cases. The workers are protected by the man camps owners, hard to get them prosecuted. "The social impact is what is tearing us apart."
During the conference, Wiyaka Chasing Hawk and Chase Iron Eyes were honored with a song.
Jo Lynn Wolf spoke of the issues of the relationship of murdered and missing women in Canada. There is an average of 600 missing women and her stories of families trying to find the missing women and the heartache that goes with it. Wolf emphasized how the issues of the war on our women is important and they bring the message of "what is happening to our young women and the need to protect each other."
Rosebud Sioux President Cyril Scott spoke of several cases that occurred on the Rosebud Sioux Tribe involving perpetrators trying to lure girls into trafficking. He emphasized the use of Facebook and social networking was a tool used by recruiters.
US Attorney for the District of South Dakota Brendan Johnson spoke on the increased prosecution rates of sex trafficking in South Dakota, especially of the "johns" in the cases. South Dakota has had more than a dozen cases so far of sex trafficking, which included well over 50 victims in the Sioux Falls area. He emphasized many of the victims of the sex trafficking cases were Native American girls.
Dakotas and Lakotas are organizing to protect the people in the region of the proposed route of the Keystone XL pipeline in the Dakotas. Already Cree and other First Nations have been devastated by tarsands mining in Alberta, Canada.
Read full article: http://bsnorrell.blogspot.com/2013/08/white-buffalo-calf-society-protect.html
at August 18, 2013 No comments: