Over 60 members of the Hoopa Valley Tribe rallied in front of the federal courthouse in Fresno on August 21 as U.S. District Judge Lawrence J. O'Neill held a hearing regarding the temporary restraining order obtained by Westlands Water District and the San Luis and Delta-Mendota Water Authority to block a plan to increase flows on the Trinity River.

Censored on the US Border: Howard Buffett's $6 million donation

The most censored by the mainstream media: US Border Patrol running drugs, abusing Indigenous Peoples on the border

SIERRA VISTA, Ariz. -- The truth about the US Border seldom appears in print. However, reporter David Morgan has exposed a $6 million "anonymous" donation from the Howard G Buffett Foundation to the Cochise County Sheriff's Office and Sierra Vista Police Department. The donation was originally listed as coming from "an anonymous" donor until Morgan filed a public information request.

Censored News
POLACCA, Ariz—On September 14, 2013, runners and their supporters from around the world will gather on Hopi’s First Mesa to celebrate and commemorate the sanctity of water in the 10th annual Water is Life run. This year’s run includes a 30-mile ultra-run, a 10-mile loop and 4-mile fun run.  The night before runners and their guests are invited to a spaghetti dinner, hosted by the Grand Canyon Trust, to learn about the Paatuwaqatsi Run from Hopi organizers.
Bucky Preston, founder of the Paatuwaqatsi Run, which is translated in Hopi as, “Water is Life,” reminds the runners that this event is not a race. “Paatuwaqatsi,” he said, “is a remembrance run; the run formed to keep the ancient trails ‘alive’. The Hopi’s believe that the trails are the veins of the village. Therefore carrying on the traditional values by utilizing the trails the villagers keep them open, this helps to keep the village alive and brings the clouds.” 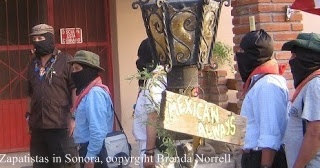 To the people and governments of the world:

To the national and international Sixth:

To the students of the Zapatista Little School:

In this time and in our history with the mother earth, the people, nations, and indigenous tribes of the Yaqui, Mayo, Náyeri, Wixárika, Rarámuri, O'odham, Nahua, Purépecha, Nañu or Ñuhu, Mazahua, Popoluca, Tzotzil, Chol, Tzeltal, Tojolabal, Zoque, Totonaco, Coca, Mame, Binnizá, Chinanteco, Ikoot, Mazateco, Chontal, Ñu Saavi, Chatino, Triqui, Afromestizo, Mehpa, Nancue Ñomndaa, Ñhato and Peninsular Mayas of the states of Sonora, Chihuahua, Veracruz, Durango, Nayarit, Jalisco, Michoacán, Querétaro, San Luis Potosí, Morelos, Mexico State, Guerrero, the Federal District, Puebla, Tlaxcala, Oaxaca, Tabasco, Yucatán, and Campeche, as well as the Ixil, Quiche, Quechua and Nasa people of Guatemala, Peru, and Colombia, who have walked attentively alongside one another as children of the mother earth, gathered together on August 17th and 18th, 2013, in San Cristobal de las Casas, Chiapas, at the CIDECI-Unitierra facilities. We met to remember and to carry on the living word of our elder brother Tata Juan Chávez Alonso, who teaches and guides us and whose memory, one year after his death, has become a source of hope and strength for we as peoples who have re-founded and reconstituted ourselves in deciding to continue being the Indians that we are, to continue speaking the language that we speak, and to continue defending the territory where we live.