Internal bleeding went untended for two days due to shock. 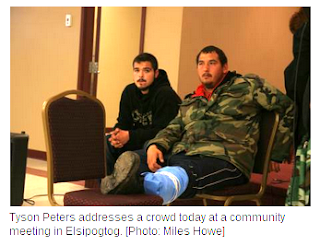 Elsipogtog, New Brunswick – It has taken three days, but sadly there is now the potential of a very serious injury arising from last Thursday's early morning RCMP attack on the anti-shale gas encampment that occurred on a piece of Crown land adjacent to highway 134. Tyson Peters, a member of the Mi'kmaq Warriors Society, today appeared at a community meeting in Elsipogtog using two friends for support. His left leg was heavily bandaged. He tells the Halifax Media Co-op that after being shot in the leg by a 'rubber bullet' shotgun blast, fired by an RCMP officer at close range, there is extensive internal bleeding in his leg. Doctors have advised him that they will know better tomorrow whether the leg will require amputation.
READ article at Halifax Media Co-op: http://halifax.mediacoop.ca/story/mikmaq-warrior-risks-losing-leg-after-being-shot-r/19398
at October 20, 2013 1 comment: 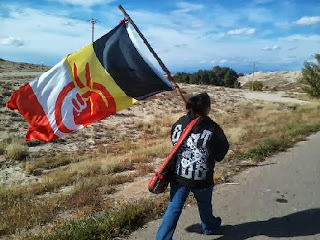 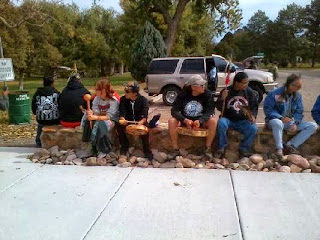 PUEBO, Colorado -- The Longest Walk 4 Return to Alcatraz walked out of Pueblo, Colorado, today, Sunday, Oct. 20, 2013, and walked into the West.
Michael Lane said, "Day 98: Walked through Pueblo to Pueblo West today. We had a large turnout from the community. Had a good gathering at the Pueblo Library yesterday too. Reddog Rudy and Duke Romero have been of tremendous assistance, hosting us and walking and running, and even arranging stay places in Salida and Gunnison for the days ahead. We would like to thank all those that have walked with us, Isabella Snowbird for her travel song, Kimberly Craven for supplying snacks at the gathering, Rita and Monica for the food and Chris for the sweat lodge Ceremony. The Band of Barrio Warriors AIM are the greatest."
The Longest Walk is headed on hwy 50 to Gunnison, Grand Junction, then Utah and Nevada before reaching Alcatraz Dec. 21, with a ceremony Dec. 22.
To offer support Wabus44@gmail.com or cell 202-436-6576.
Thank to Carl 'Bad Bear' Sampson, Western Shoshone for sharing photos via cell with Censored News! More: www.returntoalcatraz.com