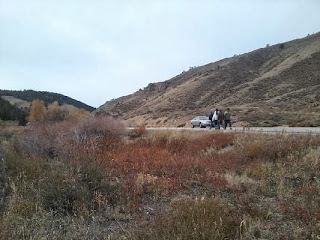 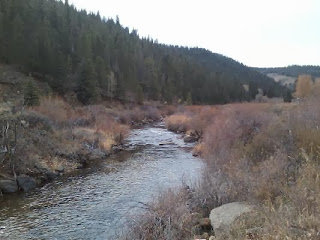 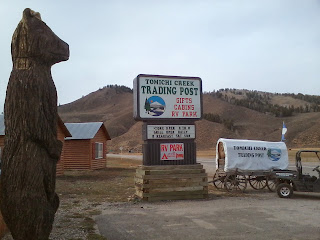 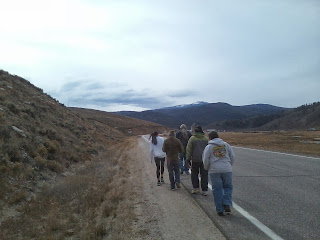 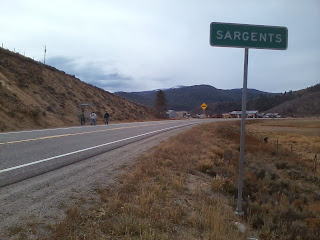 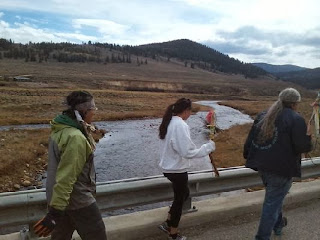 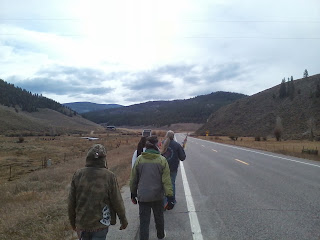 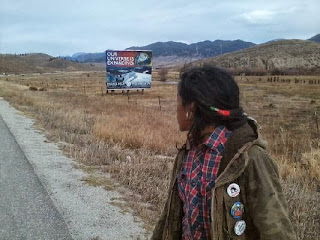 Thank you for sharing with Censored News. Long Walk 4 Return to Alcatraz is walking to uphold Native American sovereignty. The walkers today, Friday, Oct. 25, 2013, are walking west from Monarch Pass on highway 50 toward Gunnison, Colorado. The walk departed from Washington DC on July 15, 2013 and will arrive in Alcatraz on Dec. 21, with a ceremony on Dec. 22, 2013.
Update: Michael Lane said, "Day 103: went over Monarch Pass yesterday. That was something. We struggled today though. At Western Colorado College on Gunnison tonight and we did a presentation there. Thank you to Jan, Ed and Nancy in Howard and Salida, and thank you to Heather and Skye in Gunnison. Walking through Gunnison tomorrow and heading to Montrose, where hopefully we will find a place to stay for a couple nights."
If you can offer a place to stay, or support in Montrose, Colorado, or Green River, Utah, or elsewhere, or help with food, supplies or stay place, call the walkers cell 202-436-6576.
See more photos of the walk in the Colorado Rockies: Bad Bear's photos of the walk over Monarch Pass:
http://bsnorrell.blogspot.com/2013/10/bad-bears-photos-longest-walk-4.html
More www.returntoalcatraz.com
at October 25, 2013 No comments:

Mohawk Nation News 'Was fix in for Mi'kmaq Warriors at Elsipogtog?'

Mohawk Nation News
MNN. Oct. 25, 2013. Journalist Miles Howe was at the anti-shale protest at Elsipogtog throughout. He stood with the grassroots people and the warriors. His stories were reasonable and factual. Some of those who worked with our enemies genuinely thought they were helping. They did not realize how much damage they could cause. We continue to praise our Mi’kmaq sisters, brothers and supporters. In the end, on the front line, the strength and will of the people won. Read his interesting coverage of secret behind-the-scenes intrigue of RCMP, US Forces, cops, band council, UN and other advisors, AFN helpers, pacifists and other visitors!
http://www.dominionpaper.ca/articles/4927