The International Uranium Film Festival is the world’s only traveling festival devoted to the entire Nuclear Fuel Chain, from uranium mining to nuclear power plants and the use of uranium bullets, from Hiroshima to Fukushima and Fallujah. Now the International Uranium Film Festival is coming to the birthplace of the nuclear age.

Rio de Janeiro / Albuquerque, NM – On November 27 and 28, 2013, the International Uranium Film Festival will make its premiere screening in the United States, starting in the Southwest with Albuquerque, New Mexico highlighting over 40 films from 15 countries which explore not only this radioactive element called “uranium”, but nuclear practices as well. These are documentary films, experimental and animated films, new comedies, fiction and science fiction films. 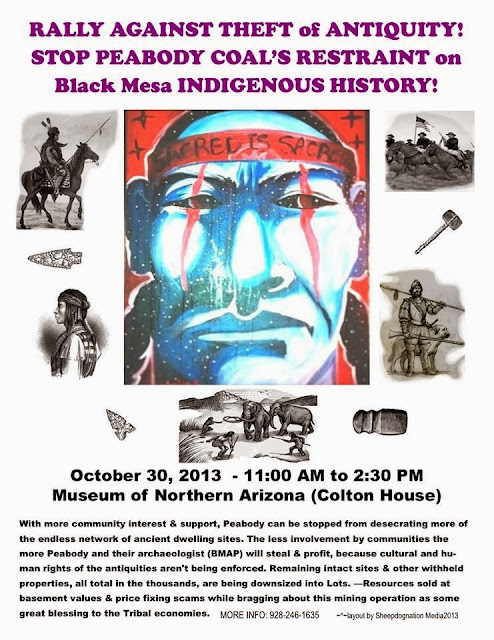 
UPDATE (Tues. Oct 29 5PM):
It would appear that the Bureau of Reclamation is feeling the pressure (note: this meeting was initially open then unexpectedly closed, now open to the public again):
The location for this meeting has moved to the Branigar-Chase Auditorium at Museum of Northern Arizona. The meeting will not be held at the Colton House. MNA’s BC Auditorium is located in the Exhibit Building of MNA.
The public is now invited to come inside and observe the meeting. The Bureau of Reclamation has stated that it will hold a public comment period at the end of the meeting where those in the audience can voice their concerns. 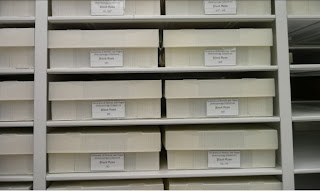 What: Rally Against the Theft of Antiquity, Stop Peabody’s Restraint on Black Mesa Navajo History.

Why: Millions of Indigenous remains, artifacts, and sacred objects have been desecrated by Peabody Energy's coal mining at Black Mesa, Arizona. All these are being withheld in vaults at closely associated universities.  Peabody's recent expansion plan threatens to further desecrate hundreds more ancient sites.

The first Cultural Review meeting for the Kayenta Mine Navajo Generating Station Permit which has been scheduled at the Museum of Northern Arizona on October 30, 2013 by the Arizona Bureau of Reclamation.  This is the first of a series of meetings scheduled to develop the critical structure for regulation and implementation of the protection of sacred sites in the mining and expansion areas leased by Peabody Energy.

"With more community interest & support, Peabody can be stopped from desecrating more of the endless network of ancient dwelling sites. The less involvement by communities, the more Peabody and their archaeologist (Black Mesa Archeology Project) will steal and profit, because cultural and human rights of the antiquities aren't being enforced," states Bahe' a Black Mesa resident and organizer of the protest.

"The remaining intact sites and other withheld properties, which all total in the thousands, are being downsized into Lots. The resources are sold at basement values and with price fixing scams, while bragging about this mining operation as if it is some great blessing to the Tribal economies."

The protest is intended to highlight the absence and removal of any public process attached to the regulatory and legal protection of intact and removed ancient sites that are being found curated in collections.

Concern has been growing due to recent revelations that Peabody Energy withheld and restricted documentation and research that pointed to the relocation of millions of Indigenous remains, artifacts, and sacred objects called the "Black Mesa Archeology Project" (BMAP).

More than one million remains and items of cultural significance are currently being held in cardboard boxes at universities.

"BMAP's transfer was initiated before the Native American Graves Protection and Repatriation Act (NAGPRA) was created and when many of today’s tribal leaders were children," according to Brian Dunfee of Peabody Energy.  It wasn’t until after the permit was issued that confirmation of the "collection" was formally announced at the true locations and facilities.

To date, there has not been an inventory conducted of the BMAP "artifacts" that complies with current laws regarding protection of Indian "artifacts.”

According to Jon Czaplicki, an archaeologist with the Bureau of Reclamation, the Cultural Review and Update Meeting CRUM extends its range from December 22, 2019 only and does not address the excavations and disruption of intact sites by Peabody in prior years.  No one seems to answer where these artifacts and funerary properties would be held after that time, and if they would be separated from their sister and brother collections or the intact sites endangered in the Kayenta Mine lease with Navajo Generating Station.

Participants of the rally are also calling for leadership, solidarity and participation led by Traditional Indigenous Peoples to discuss the impact that the exclusions by Peabody Energy has on true restoration and repatriation.

Descendants of the Ponca Tribe will host a Spiritual Camp in Nebraska from Nov. 8-11, to draw the line against the Keystone XL pipeline's potential destruction and disrespect to the sacred sites along the Trail of Tears of the Ponca Nation.

Invited are descendants of the Ponca Tribe and all allies who wish to preserve the significant history of this sacred site against tarsands development. All faiths are invited to come pray with the Ponca descendants and allies for the preservation of Mother Earth for four days during this spiritual camp. The sacred fire will be lit at 2:00 p.m. on Friday and burn until sunrise on Monday. The spiritual camp is hosted by Ponca Tribal families, Brave Heart Society, Oceti Sakowin supporters, the Cowboy and Indian Alliance, and Bold Nebraska. More information also available at ProtectTheSacred.org.
Visitors are welcome to camp overnight at the spiritual camp, on land near Neligh, Nebraska on the KXL pipeline route. (Many thanks to Art and Helen Tanderup for graciously offering their land for the camp.) There are also nearby accommodations that include the Delux Motel (402-887-4628) and West Hill View Motel (402-887-4186), and additional options in Norfolk, NE about 40 miles away. If you're unable to join us this time, other Spiritual Camps will rise up in November, December & possibly January, hosted by the Sicangu (Rosebud); Ihanktonwan (Yankton); and Minneconju (Cheyenne River).
Please use the form below to register to attend the Spiritual Camp. The exact location will be provided by email to those who complete the registration form. For any questions, contact Faith Spotted Eagle at eagletrax@hotmail.com or (605) 481-0416.
PONCA TRAIL OF TEARS SPIRITUAL CAMP
November 8-11, Neligh, Nebraska
Registration required.

In response to the rising tide of tribal and landowner opposition to the Keystone XL pipeline, which is slated to destructively cut through numerous sacred sites and compromise the safety of land and water for all citizens, several tribes and allies of the Ponca Nation will participate in a Spiritual Camp on the Ponca Trail of Tears near Neligh, Nebraska on Nov. 8-11, 2013. The State Department and the Nebraska DEQ reports failed to study the impacts and risks of the pipeline to this culturally significant area.
The Keystone XL pipeline cuts a swatch through the historic Ponca Trail of Tears — the forced migration route for the Southern Ponca who were exiled from their homelands in Northern Nebraska during the 1800s. The famous Ponca leader who challenged the government and eventually returned to his homelands was Chief Standing Bear, now buried near Niobrara.
With this new erosion of tribal rights, this time at the hands of a foreign company, tribal families are saying "enough." The entire KXL pipeline path cuts through Treaty and aboriginal lands without respect to water rights, sacred sites, and threats to the environment. Landowners feel the same way, their scared land and water is being taken against their will. The Ponca Spiritual Camp — the first of four tribal spiritual camps scheduled for the fall and winter of 2013 — will send a strong message to President Obama, Congress and TransCanada that this pipeline and tarsands development will not be allowed, is not wanted and is not in our national interest.
The Ponca Trail of Tears Spiritual Camp is hosted by Ponca Tribal families, Brave Heart Society, Oceti Sakowin tribes, the Cowboy and Indian Alliance, and Bold Nebraska.
at October 29, 2013 No comments: