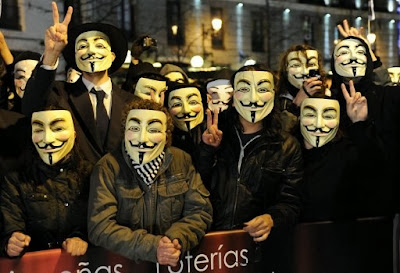 An open letter to the media, by Anonymous:
http://pastebin.com/sK6Zi3EM

Following the Million Mask March organized by Anonymous, the U.K. based news website The Telegraph published an article titled, “Anonymous have been exposed as hypocrites. Watch them try to wiggle their way out of it.” This smear refers to the well-known fact that Warner Bros. owns the rights to our mask, profits from its sale, and that the masks themselves are produced in developing nations.

According to the article, authored by New Statesman staffer Martha Gill, the conditions in a Brazil factory that produces Guy Fawkes masks are “unpleasant” for the workers. Gill doesn’t say how she knows the conditions are unpleasant, just that they are.

In her article, she doesn’t claim to have spoken with the workers and she doesn’t provide the name of the factory in which they’re manufactured. On Twitter Gill asks, “So those V for Vendetta masks are made in sweatshops. Does this matter?” Later when someone challenges her on the issue, she says, “That’s the word,” essentially admitting her Telegraph article was based on a rumor.

Gill had previously complained that it was difficult to reach Anonymous online. Following the publication of her article, we sent her private message, which read,  “Did you take the time to speak to any of the workers at the Condal Masks Factory before writing their working conditions were unpleasant? Or the widow who owns the factory to ask how her employees are treated?”

After more than 24 hours without a response, it was clear Martha Gill wasn’t interested in speaking to Anonymous at all.

The truth is, Gill based her article on a photograph taken by Getty photographer Buda Mendes at the Condal Masks Factory in São Goncalo. This factory is actually a 55-year-old family-owned workshop, where artists produced an estimated 200,000 masks yearly. Most of them are designed by Catalan artist Sergi Arbusa y Amoros and are sold for the annual Carnival in Brazil, which is attended by more than 3 million people in Rio de Janeiro every year.

To be fair, many other people on Twitter and in the news have made this baseless accusation about Condal. Frankly, it’s sad that a photograph of dark-skinned people at work is immediately associated with forced labor.

We haven’t purchased any Getty images, but here are a few of Martha Gill’s “sweatshop” that you can buy if you’re interested in doing a report on hardworking Brazilian artists.

Personally, we think the owner, Olga Gibert, should look into filing a lawsuit against The Telegraph for this defamation. It would also seem appropriate for the Guardian, The Telegraph and the New Statesman to go through all of the articles Martha Gill has filed and examine them for disinformation—they may have another Jayson Blair on their hands.

Regardless of Gill’s deceit, the issue of Warner Bros. does remain, however. There is no denying that by purchasing a Guy Fawkes mask, consumers are contributing to the pockets of this Hollywood studio. Warner Bros. in turn lobbies for legislation, such as SOPA, that would undoubtedly censor the free speech of online users and irreparably damage the integrity of the Internet. This is not a fact that Anonymous has tried to obscure from the public.

In fact, the day before the Million Mask March, YourAnonNews tweeted that it did not recommend people purchase the mask, then stated, “Wear anything you want to #MillionMaskMarch, including Guy Fawkes. We just want people to be conscious about their consumer choices.”

These messages to the public were not included in the Telegraph article.

The fact of the matter is, there are inherent consequences with any consumer purchase. For instance, Foxconn, a large contract manufacturer in China, has been described by many as a labor camp. They’ve also manufactured products for tech giants such as Apple, Dell, Sony, and Hewlett-Packard. Since 2010, at least 17 deaths occurred when employees committed suicide by jumping from the roof of the building. To use a phrase from Martha Gill’s article, these are certainly “unpleasant conditions.”

For the purposes of this article, we’re going to make two assumptions. One, at least some of the writers at the Telegraph own products sold by Apple, Dell or Sony. Two, if we asked any of these writers if they were in favor of sweatshops, they would tell us they weren’t. By Martha Gill’s logic, instantly, everyone that works at The Telegraph is now a hypocrite.

It would be hard to believe anyone who claims they research _every_ product before a purchase. What we can do is inform ourselves as much as possible and weigh our choices against this information. All we can really ask is that people strive to become better decision makers and not turn a blind eye to the suffering of others.

Given the knowledge that almost everyone is making purchasing choices that in some way contradict their values, is it really ironic that Anonymous is wearing a mask trademarked by Warner Bros? Perhaps the word you’re looking for is “unfortunate.”

What is also unfortunate is that members of the press have chosen to attack Anonymous, while ignoring the important issues we’ve raised about human rights, our environment, and the corrupt acts of our business and political leaders. As it turns out, it’s just much easier to take pot shots at average citizens who express logical grievances with the status-quo.

Some of the same journalists complaining about inflation, worrying about climate change, or ranting on about the flaws in their nation’s healthcare systems, are among those who frequently declare,  “I just don’t understand what they’re protesting.” These people use their lack of understanding to justify attacks against conscientious citizens. They claim to love democracy but obviously can’t stand it when people behave democratically. Are these the kind of people who deserve the privilege of reporting our news?

What Martha Gill failed to mention is that there were thousands of protesters in Southeast Asia wearing Guy Fawkes masks while protesting the same “unpleasant conditions” she fabricated about a mom and pop store in Brazil. The next time Gill wants to exploit the suffering of others and pass judgement, maybe she’ll consider conducting an interview with them before arrogantly calling someone else a “hypocrite.”


Share this link from Censored News
http://www.bsnorrell.blogspot.com/2013/11/anonymous-takes-on-telegraph-over-mask.html
at November 09, 2013 No comments: