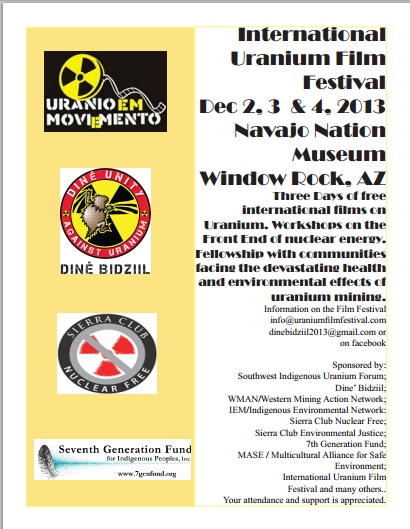 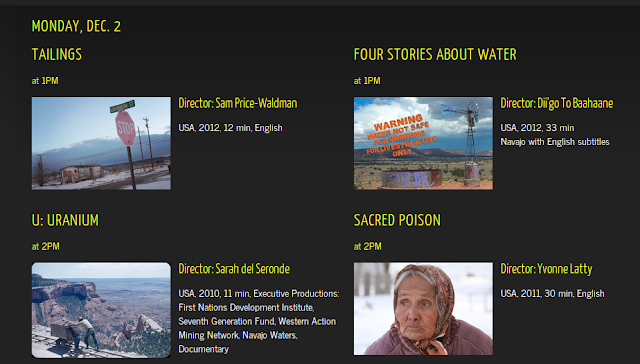 Please share this Censored News link from the browser
http://bsnorrell.blogspot.com/2013/11/navajo-nation-international-uranium.html
at November 20, 2013 No comments: 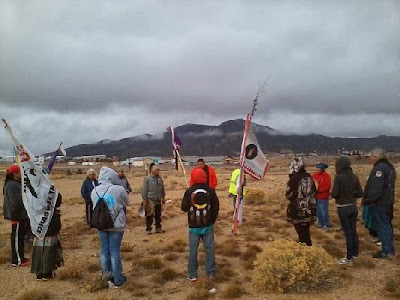 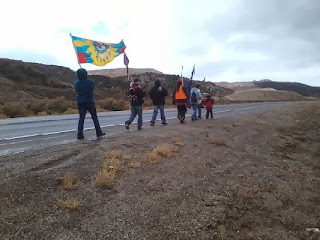 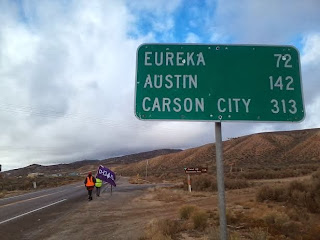 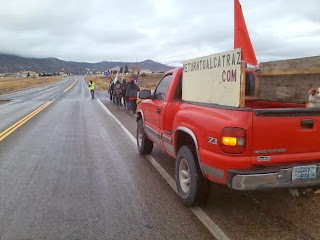 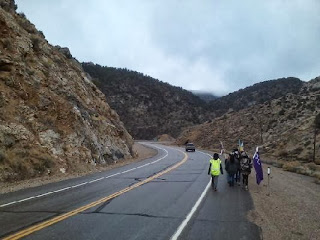 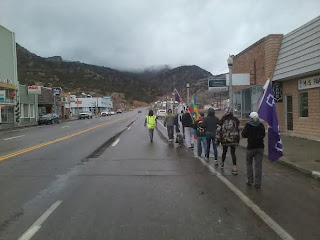 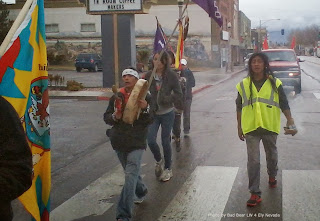 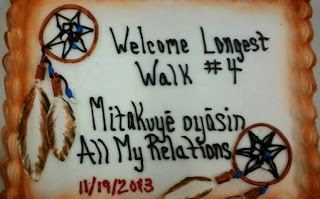 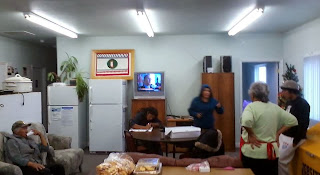 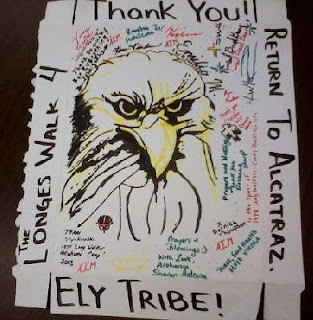 Please share this Censored News link from the browser:
http://bsnorrell.blogspot.com/2013/11/western-shoshones-welcome-longest-walk.html
at November 20, 2013 No comments:

The greatest leader of the Onyota’aka died last week. There, I said it — the greatest leader. And let there be no mistake, because in a sea of frauds who buy enough votes to be declared “winners” in tribal elections or twist around “customs and traditions” to get placed as “leaders” or, worse yet, use the BIA to get designated the “federally recognized leader,” Jake Thompson’s leadership was real and undeniable.
Jake took nothing with him when he completed his journey back to our Mother. However, he left a lifetime of work for all of us to build upon. He set an example for a life well lived.
Jake was not a Royaneh. He never was put up through a condolence ceremony for an Oneida title. He wasn’t a “chief” although he did actually serve as the “president” of the Oneida Nation of New York for a brief stint. The fact of the matter is that Jake wasn’t even Oneida. He was Mohawk from Akwesasne. Jake knew the Longhouse. He knew the Longhouse in both Akwesasne and Onondaga but was not “Longhouse.” And he likely never stepped into an Oneida Longhouse.
His Kaniekeha name was Shakohentetha. It means “he advances his people” and put the causes and welfare of the people ahead of his own. Jake did exactly what his name suggested.
When I use the word “leader,” which is something I rarely do without at least a hint of sarcasm in my voice, I don’t mean a man who commands a following or who has authority over others. I mean a man who leads by example.
In the Kaianerehkowa it is explained that a man who carries a family title must have proven himself as a husband, a father and an uncle. Jake did all of these to the highest extent and standard. He was a faithful husband, a nurturing and supportive father and a wise and always teaching uncle to far too many to count.
The leadership to which I speak is not just that of a good family man. Jake was an activist. Unlike the role and responsibility of a Royaneh who is placed on a path that is well defined by those that came before us and the will of the people, Jake searched for the path and made one where one was needed but did not yet exist.
In the fight to reclaim Oneida homeland, Jake had to create an entire legal pathway to even get a court to accept the filing. The case he researched and advanced would not only make it to, and persevere, through the U.S. Supreme Court, but it also created the legal corridor for challenges for land reclamation that never existed before.
Notwithstanding the dismal failures of those who use Jake’s good work and squandered or exploited his success, there is no individual who accomplished more on “Indian land claims”
than Jacob Thompson.
The work to advance the causes of Native people didn’t stop with land issues. Jake also may have played the most significant role of anyone in advancing the Indian Child Welfare Act (ICWA). While serving as a governor appointee in the State of Massachusetts, Jake drafted letters and lobbied every Congressman in the U.S. House of Representatives and every Senator in the U.S. Senate to approve ICWA. He didn’t stop until it was signed into law.
As an educator, Jake continued his work with children and served as the Administrator for the Syracuse School District’s Native American Program. With a Master’s Degree from Harvard, Jake chose to advance others rather than chase the promise of wealth that most associate with such an education.
Jake and his wife Geralda brought up foster children and took in other children to raise, as their own, in strong opposition to Native kids being adopted out to non-Native families. Their own sons would become well respected among all who would know them with one son serving with distinction as a Syracuse City police officer and another pursuing a medical career as an obstetrician.
Jake was my friend and while we didn’t always agree or find ourselves beginning on the same side of a dispute or philosophical view, we could talk for hours and more often than not agree strongly on our common ground.
Jake did not proclaim himself as a leader. Real ones don’t need to do that. His life is a testament to what is possible. When we say we stand on the shoulders of those who came before us, it should be known that many of us are standing on Jake Thompson’s — including those who don’t deserve a spot at his feet.
So as our Mother takes you back into her arms, rest well and be proud of the work you have done. We will carry you with us always. Niawehkowa!

Here we explain the reasons behind this strange title and those that will follow, narrate the story of an exceptional encounter between a beetle and a perplexing being (that is, more perplexing than the beetle) and the reflections of no immediate relevance or importance which occurred therein; and finally, given a particular anniversary, the Sub tries to explain, unsuccessfully, how the Zapatistas see their own history.
November 2013
To whom it may concern:
WARNING – As noted in the text entitled “The Bad and Not So Bad News,” the writings that preceded that text had not yet been published. Ergo, what we are going to do is “rebobinar” (that is, “rewind” the tape) to what should have appeared on the Day of the Dead. Having rewound, you may then read in inverse order the inverse order in which the texts will appear and that way you will…hmm…forget it, I’ve even managed to confuse myself. The point is that you get the gist of the “retrospective” perspective. It’s as if one is going in one direction but later returns to see how they got going in that direction in the first place. Got it? No?
Read more »
at November 20, 2013 No comments:

Mohawk Nation News
MNN. Nov. 19, 2013. The current dispute at City Hall is about who has jurisdiction to run the Corporation of Toronto. It sits on unsurrendered Mohawk land. Toronto is Mohawk for“where there are trees standing in the water”, Ontario [O’nia’ta:rio] is Mohawk for “large wide water” and Canada [Ka’na:ta] is Mohawk for “community”. Under Wampum 44 of the Kaianerekowa/Great Law, land and resources issues are the responsibility of the Kahonti’tiokwa:nio, the Council of Women.
Read more »
at November 20, 2013 No comments:

MNN. NOV. 18, 2013. The Rob Ford spoof is a mind control distraction from what’s really going on.

Spoof is being used as a mind control device.

His job is to cover the real agenda. The invaders of Great Turtle Island have been living an imitation existence called the “American Dream”, which is becoming the American nightmare. The plutocracy is firmly in charge. Whoever makes the most money makes the rules.
Etobicoke, is the western part of Toronto, where Rob Ford and Stephen Harper grew up. Etobicoke was incorporated in 1954 as “Ontario’s first planned community”. It is an experimental self-contained model for future communities.

Is Ford a trained clown,  or half wit, or both?
CNN’s Anderson Cooper is coming to Toronto on November 18th to interview the crack smoking mayor. Ford’s seemingly mindless behavior is being promoted worldwide. He is systematically lowering the moral compass permanently. It must be by design!
The handlers have trained Ford on how to play out vices, follies, abuses and shortcomings for public ridicule. It is drawing attention to the true underworld foundation of the corporatists and the government. Society is being guided gently into fascism, letting them think they are guiding themselves. This move is called the old “totalitarian tiptoe”, starting in Toronto. Bad behavior is being turned into natural behavior, which is becoming acceptable to everyone. Martial law will be needed so the people with the money can be protected. The PTB want to control everyone and everything.
Toronto is run like any private corporation. The people are being conditioned to become tolerant of the intolerable. Criminal and immoral behavior is designed to look normal and funny. Everybody forgives Ford because he is a fat clown. We are all told, “You can’t fight city hall”. “You can’t fight city hall.” Today 11/18/13 Ford physically attacked a co-councillor at Toronto. Ford attacks female councillor in the Toronto City Council chamber.
Many of us see through the window dressing and the lies. Beware, something is coming down the pipe.
MNN Mohawk Nation News kahentinetha2@yahoo.com  For more news, books, workshops, to donate and sign up for MNN newsletters, go towww.mohawknationnews.com  More stories at MNN Archives.  Address:  Box 991, Kahnawake [Quebec, Canada] J0L

Supai Waters 'Stay in the center of the flowing river' 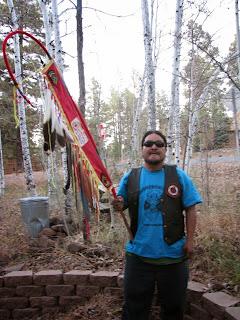 Today we see a world of  interventions supernatural and spiritual mediums all over the world. This signifies a dramatic change. When the mountain lion came to the springs to drink water we knew that the life giving force would fall from grace and the natural Eden of the Americas would not be the same any more. When the twin brothers appeared of the white elk nation, they gave me unseen sacred arrows, which carries the torch of spiritual resistance and dominance as a seventh eye clan. I give you these songs and stories to guard the nine pointed star in the Americas. Stay in the center of the flowing river, don't  look at no sides and don't look back. Look for mother earth, help her and lead her through to the Indian world. She lives to the west for ever and her warrior son lives to the east for ever. Ask them secrecy to fulfill the divinity. The five fingered star is passing by, where flying nations are waiting. For all plains nations to pray for seven days. From nine o’clock to three o’clock, which will signify the rainbow to be healed for buffalo nations in the Americas. hoka mitukiya ayy ihunigyo


Please share this Censored News link from the browser:
http://bsnorrell.blogspot.com/2013/11/supai-waters-stay-in-center-of-flowing.html
at November 20, 2013 No comments: