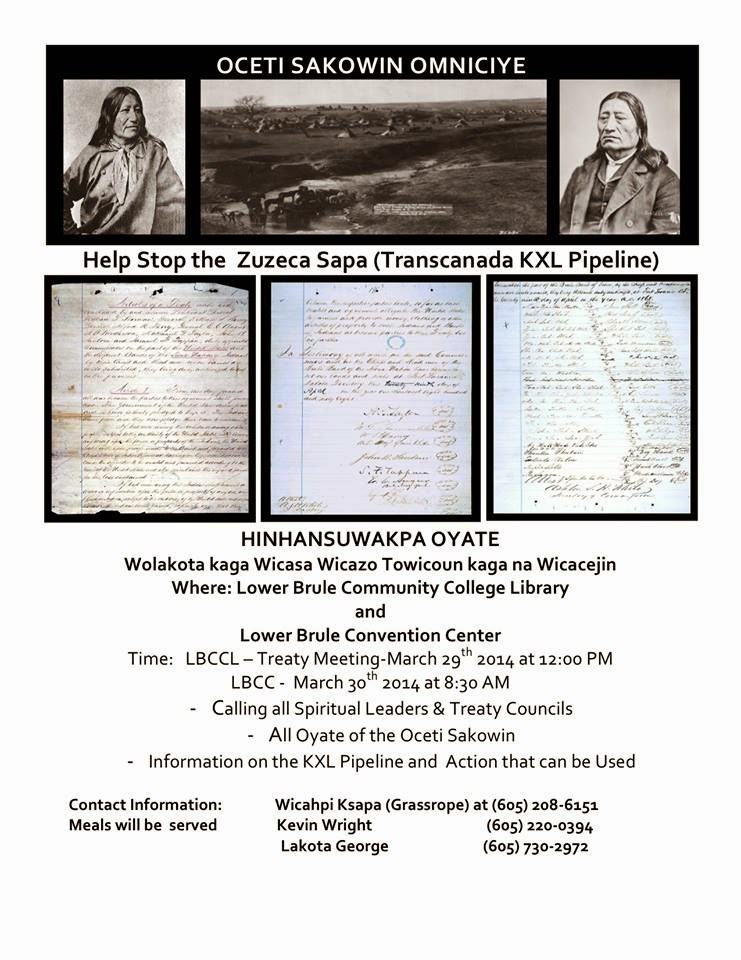 “We sought spiritual guidance and were told that the spirit of Unci Maka will awaken people to protect her. For us it has always been about protecting sacred water, whether it's uranium mining or KXL.”  Debra White Plume, Owe Aku, Moccasins on the Ground.
The grassroots people of the Kul Wicasa Oyate (Lower Brule) immediately put out a call to action when they learned that their Tribal Council (1934 Indian Reorganization Act government) agreed to allow the construction of a power station and power lines on treaty land necessary to move tarsands oil through the KXL pipeline.  Despite efforts of the grassroots leaders to obtain documentation from the Lower Brule Sioux Tribe, their attempts were unanswered.  The Lower Brule Sioux tribal council is comprised of six people including President Michael Jandreau, who has served in tribal government since 1973, with the most recent decades in the office of the President.  Inquiries to the Council by several tribal members resulted first in denial, then in confirmation (without documentation) and finally an admission that the ‘carrot’ to the Tribal Council is the construction of wind turbines and free electricity for tribal members.
Lakota people from Rosebud Sioux and Cheyenne River Sioux reservations and surrounding towns and urban areas, as well as members of Owe Aku's Moccasins on the Ground, headquartered on the Pine Ridge Sioux Reservation, answered the call to action. The grassroots people served the evening meal to the gathering of about 200 people and spiritual protocol was followed with the offering of prayer and honor songs by Kul Wicasa singers.  George Estes, a member of the Kul Wicasa Oyate and world renowned Lakota flutist, shared a song for Mother Earth to strengthen the growing spirit of collective action.
"We answered the call to action to stand in solidarity with our relatives who want to protect sacred water and lands from Transcanada's HUGE power station needed to pump tarsands through our treaty territory. According to everything we have learned, their tribal council is taking action behind the peoples backs.  We will stand with our relatives and, as one young man said, ‘lets take it right to them,” stated White Plume.
“We’re up against a well-established council.  They had to have signed an agreement,” said Kevin Wright, co-organizer of the meeting.  Power line leases are entered into with local utilities and power corporations (under South Dakota Public Utilities Commission regulations), in this case Basin Electric who intends to provide electrical power to Keystone XL.
The grassroots people of Kul Wicasa oppose the development of the power line infrastructure planned by Basin Electric.  The Lower Brule substation is to be located two miles from the Big Bend Damn.  The thick, corrosive nature of tarsands oil (which in its natural state is the consistency of peanut butter) requires a constant temperature of 150 degrees Fahrenheit and necessary dilutants to liquify it enough to be slurried through the pipeline. This will require an enormous amount of power.  Basin Electric stated at a public utilities commission meeting in Winner, SD “the pipeline apparently moves oil under 1440 pounds of pressure per square inch. If the line is to move 700,000 barrels of crude per day, each pumping station requires three 6500 hp electric motors running on 17 megawatts of power night and

day.  If the flow rate is increased to 900,000 barrels per day, five 6500hp electric motors are required.  That would use 25 megawatts of power.”
This increasing demand for electricity forces the need for the additional power station at Lower Brule. Transmission studies indicate the current system has reached its load limit.   Given the location of the Lower Brule substation, 2 miles south of the Big Bend Damn, it is apparent Missouri River water will be used to produce electricity.
The 230-kV transmission line would impact the landscape along the Missouri River.  This area provides a recreational and tourism based economy to the Lower Brule Sioux Tribe.  According to TransCanada’s own Supplemental Environmental Impact Study, “the 75-mile transmission line would have a 125-foot-wide right of way; therefore, approximately 1,150 acres of land would be affected by construction… An average of 6.6 support structures per mile would be required. The average height of the structures would be 110 feet, and each would span an average of 800 feet.”
Both TransCanada and Basin Electric admit the impacts of the power lines would be permanent, including destruction of soil and vegetation along the right of access and though TransCanada has agreed to mitigate this damage, there are no guarantees.  This could negatively impact the Lower Brule Sioux Tribe’s environmentally sound economic development project called Lakota Foods, started seven years ago with popcorn, kidney and pinto beans, including processing and packaging facilities.  These products are grown on the reservation and the enterprise provides jobs to the people most immediately affected by the proposed KXL pipeline’s need for electrical expansion.  (http://www.americanindianfoods.com/products/lakota-foods/)
In June 2011, Canada’s National Energy Board inspectors revealed pump stations in four locations lacked a required “alternate source of power capable of operating each station’s emergency shut-down system,” finding TransCanada is non-compliant with board regulations.  Evan Vokes, a “whistleblower” who has challenged TransCanada’s methods stated, “an audit based on paper and interviews only cannot catch non-compliance in the field. In my experience, TransCanada’s management failings are systemic and won’t be fixed simply by reviewing what TransCanada says its policies are on paper. These kind of reviews have not fixed the problem in the past and they aren’t sufficient now. Time and again, TransCanada’s internal and third-party audit systems have failed to catch the repeated substandard practice of engineering in the construction and maintenance of its pipelines.”  (http://www.desmogblog.com/2014/03/07/whistleblower-s-evidence-against-transcanada-whitewashed-regulators.)
Kevin Wright of the Kul Wicasa Oyate stated, “even one inch is too much” when it comes to collaboration that leads to the construction of KXL tarsands pipeline on Lakota treaty territory. “The electric power necessary to move tarsands bitumen does not come close to the power of the Lakota Oyate to protect our sacred water,” stated Natalie Hand.
The Rosebud Sioux Tribe is in the same situation.  Although Transcanada has carefully avoided routing the pipeline across reservation land, they too are impacted by KXL’s necessary infrastructure.  Russell Eagle Bear of the Rosebud Sioux Tribal Council, which has officially opposed the Pipeline, stated that power lines are planned to cross the Rosebud reservation.  He said construction of a man camp is planned literally across a narrow dirt road from the reservation.   “We told the Bureau of Indian Affairs, do not let the transmission line through our territory.”
White Plume warned of the devastation that will be caused by TransCanada infrastructure, whether it’s the pipeline, the electrical infrastructure or the bad man camps that will each house up to two thousand imported workers.  “In this work we’ve learned a lot about the tarsands mines up north, we have friends and allies who live in a spiritual way who come from there. They've been displaced from their land because some of their band members signed agreements with corporations and the First Nations peoples had to move off the land; the land isn't even there now; it's an oil mine; there was a lake there that was 200 miles long and 100 miles wide.  Now, the elders are saying, for the first time, the shoreline is receding and the rocks at the bottom of the lake are exposed.  Water is being taken from the rivers and lakes to support the destruction by the tarsands mine.   I'm shocked this tribal council has signed agreements with KXL since we are supposed to be standing together as Oceti Sakowin (Seven Council Fires).  Fat Taker never stops and will run over anybody to feed themselves.”  As Kevin Wright of the Kul Wicasa Oyate stated, “if we do not stand up to the Black Snake, when our sacred water is gone, all we will have left to drink is our tears.”
The Kul Wicasa Oyate have partnered with Owe Aku to host an educational and action meeting on March 30th, 2014 at Lower Brule.  For more information contact Kevin Wright at 605-220-0394 or Louis Grass Rope at 605-208-6151.  The Kul Wicasa have scheduled a Treaty Meeting for March 29, 2014.
The message of the grassroots meeting: we are one Lakota Oyate and we will not permit the destruction of our lands and waters, we will protect it for future generations.
American Indians defend Indigenous Peoples Lakota Lower Brule Native Americans pollution protect protest South Dakota tarsands TransCanada water