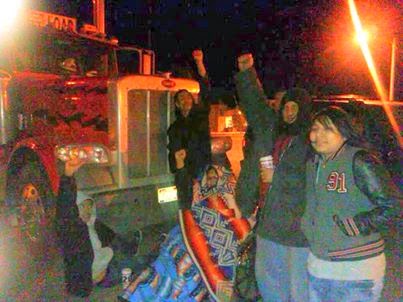 By Oyate Media Network
Posted with permission at Censored News
March 26, 2014 -- Members from the "CRST" Cheyenne River Sioux Tribe have spotted a huge Mega Load on their reservation homelands and banned together to stop it in its tracks. The truck driver was told to turn back and leave the reservation lands the way he came in and was in fact escorted off the reservation by tribal police.
Young and old folks and indigenous people have been uniting and standing strong to protect our beautiful Mother Earth.
Wopila to these grassroots people for standing guard and protecting their homelands.