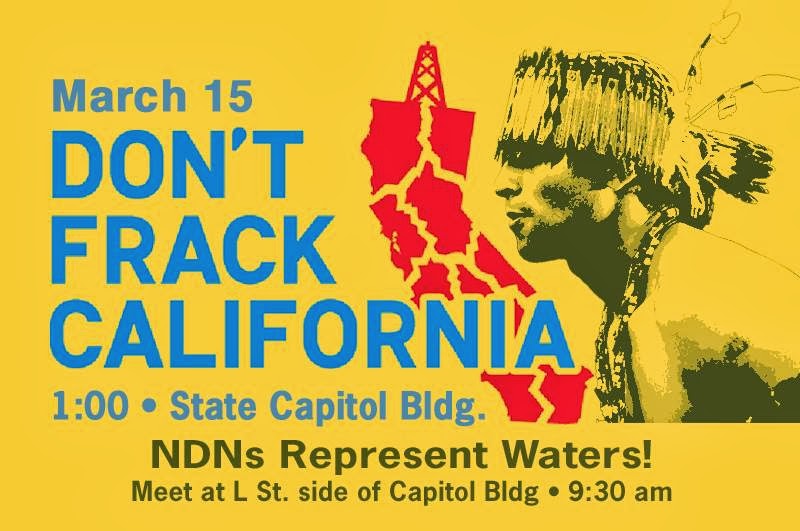 SANTA BARBARA, Calif. -- Over 3000 people are expected to gather in Sacramento on Saturday March 15 to join California Indian Nations and send a clear message to Governor Brown and his administration that Hydraulic fracturing, or fracking, practices/efforts need to end in California.
“We are the ancestors of the future and it is our responsibility to be the care takers of the earth, as was given to us in our original teachings by our ancestors. We must not allow the continuous devastation and degradation of our Mother, Earth. We must be the voices for our children and our grandchildren. Fracking must stop by any means necessary,” states Corrina Gould, Elder, Chochenyo/Karkin Ohlone.
“Fracking” is a method of oil and gas production that involves blasting millions of gallons of water, mixed with sand and toxic chemicals, under high pressure deep into the earth to allow oil and gas extraction, but it can also pollute local air, water, and endanger the lives of people and wildlife.  Fracking exposes people to radioactivity and numerous toxic chemicals such as lead, arsenic, methanol, and benzene.
The chemicals used in fracking have been linked to infertility, birth defects and cancer.  Fracking is also known to trigger seismic activity and earthquakes.

Anti-Fracking efforts have been led by California Native Nations throughout the state and on February 28, 2014 the Los Angeles City Council passed a ban on fracking within its jurisdiction.  This makes Los Angeles the first oil-producing city in California to call a halt to the practice. Fracking has been documented in 10 California counties — Colusa, Glenn, Kern, Monterey, Sacramento, Santa Barbara, Sutter, Kings and Ventura. Oil companies have also fracked offshore wells in the ocean near California’s coast, from Seal Beach to the Santa Barbara Channel. Fracking may have been used elsewhere in California, since state officials have monitored neither or tracked the practice until recently.
Indian people have been fighting against hydraulic fracking and toxic dumping for many years.  “Toxic Dumping and hydraulic fracking like efforts have been happening on and around Reservations for decades, causing a multitude of problems for our people; birth defects, and twisted strands of cancer.  No one took notice or interest when Native people wanted this stopped, now all of a sudden when it is becoming more of threat in non-Native communities, there is alarm and action” stated Corine Fairbanks, director of American Indian Movement Southern California Chapter.
Representatives from the Maidu, Kurok, Hoopa, Ohlone, Winnemem Wintu, Pit River, and Chumash Nations are but a small list of California Native Nations that will be attending along with Indian people representing other Nations, Indigenous communities, Native Organizations; including activists in the Idle No More Movement.  Chief Caleen Audrey Sisk, Tribal Chief and Spiritual Leader of the Winnemem Wintu, challenges to take the “Water Challenge” and deliver the message to Sacramento this Saturday.  “When we accept the winter water challenge and go down to our rivers, springs, lakes and oceans to make a heartfelt commitment and challenge others to do the same it makes the waters happy! All over California the water ways are waking up with good blessings! Now accept the challenge to take the message you got to the Capitol and tell the WORLD…NO FRACKING CHANCE will your BROWN WATER PLAN destroy our SACRED WATERS!”
The Gathering is set to begin at 1:00 pm in Sacramento, CA. at the Capital Lawn on “L” Street, between 10th street and 12th Street.  Parking is anticipated to be a problem, Indigenous Leaders are urging family, friends and allies to meet on “L” Street on the side of the Capital Building, beginning from 9:30 am to 10:00 am.
For more information on this issue, please contact Chief Caleen Sisk, (530) 710-4817/ caleenwintu@gmail.com or Corine Fairbanks (805) 994-8305/ aimsocalifornia@ymail.com
at March 12, 2014