Sonny Skyhawk at the Oscars 2014

The Academy Awards are here and everyone is all gussied up for their grand entry and walk down the Red Carpet. For the American Indian community of actors, above and below the line participants it may seem like an impossibility, but it should not be. That is where AIFT, American Indians in Film and Television, comes in. We have been diligently opening doors in the mediums of film, television and media for the last 30 years. Maybe you have never heard of us, and that's ok, because we are not interested in promoting ourselves, we're interested in the consideration, inclusion and career opportunities for our people in these mediums, and empowering them to walk through those doors and be the best that they can be. That's who we are. You see, until we have those opportunities become a reality, we will continue to be the audience instead of the participants, and our aim and existence is to change that.

AMERICAN INDIANS IN FILM & TELEVISION, (AIFT) is a Native non-partisan , non-profit, media advocacy and civil rights organization established in 1981 in Los Angeles, California. Its mission is to empower the American Indian, educate and influence media corporations to be more receptive and inclusive in hiring Native professionals. We create internships, in order to augment the pool of talent that presently exists. Equally important is to challenge misperceptions and those that would carelessly exploit negative stereotypes and images of the American Indian. After having made changes and great strides towards inclusion and understanding in the past 33 years, we continue our diligent efforts to seek equal access and acceptance in the spectrums of digital and linear communications. We presently and responsibly act as Representatives, and / or Advisors to the Federal Communications Commission, Cable and Broadcast Networks, in the effort to gain and influence the participation and acceptance, in all matters pertaining to mainstream communications. We will always seek a just and respectable relationship with anyone who is willing to meet us half way and who is looking to implement and provide transparent business opportunities and access for our people. We have created and implemented Native councils and committees at each hub of the entertainment business. We have instituted standing committees at the Actors, Writers, Producers, and Directors Guilds, so as to create pipelines and infuse and inspire participation and access for those Native people interested in pursuing entertainment careers. We provide access to Showcases for actors and writers at each Network to be able to practice their craft and be seen by casting directors and agents. Our goals are simple and direct. We believe passionately, that in order to change perceptions and misconceptions about us, we need to participate in the process, and if we do not, we are relegated to be the audience versus the participant. Those are our proven beliefs and mandates and we intend to pursue them to the best of our abilities, with the help of our Creator, and believe in empowering our people, who deserve no less. We can be contacted at reelndn@charter.net or soon at our new address, yet to be announced. 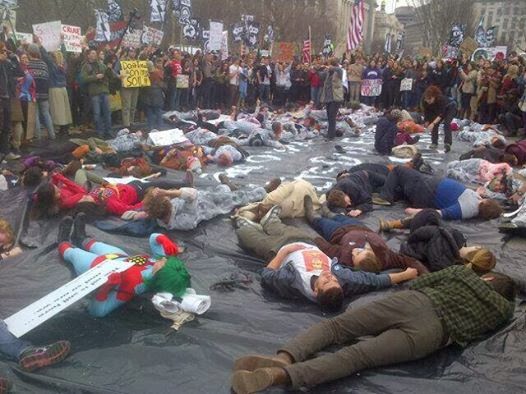 Hundreds of students have locked themselves to the White House Fence in an act of civil disobedience, mass arrests underway.
http://new.livestream.com/JamesFromTheInternet/events/2780094
or
LIVE http://www.ustream.tv/rootsmedia
Students die-in outside White House to say #NoKXL