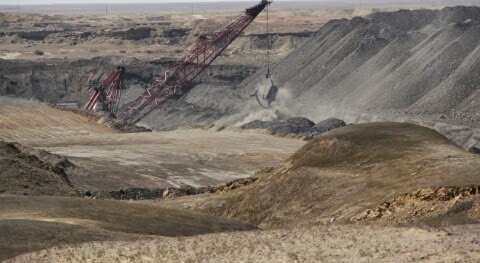 DENVER – In a major victory for clean air and public health, a federal judge issued an order on Tuesday that nullifies a plan to expand the Navajo Mine in northern New Mexico and stops coal mining in the expansion area. Judge John L. Kane's order follows his March decision rejecting the Office of Surface Mining's 2012 approval of the mine expansion for its violation of the National Environmental Policy Act and failure to analyze harm to public health, the environment, and endangered species from mercury and other coal combustion pollution.
Under Tuesday's order, all mining trucks and equipment in the expansion area must halt operations immediately pending a new NEPA review that properly evaluates mercury risks to public health and the environment. This is the second time in five years that a federal court has held that OSM failed to comply with NEPA when attempting to approve an expansion of coal mining at the Navajo Mine.
"This decision confirms the serious problems with the Navajo Mine and the long legacy of pollution that must be addressed at the entire coal complex," said Sarah White of Dinè CARE. "It also appears that the Navajo Transitional Energy Company and OSM have minimized the analysis on the 50-year-old facility, which is fraught with liabilities. We are tired of being marginalized with our public health, culture and communities being compromised. We must now identify flawed coal economics being perpetuated on the Navajo Nation and supported by OSM."
"OSM has shirked its legal responsibilities over the Navajo Mine for decades. The court's reasoned ruling sends a clear message that this has to stop," said Shiloh Hernandez of the Western Environmental Law Center, who argued the case. "Before additional mining may proceed, OSM must come clean with the public about the extensive public health and environmental contamination from this antiquated coal mine and power plant complex. The public has a right to know how coal impacts their lives, lands, waters and communities."
"The decision affirms the importance of environmental laws and represents nearly 10 years of work by dedicated organizations and lawyers," said Mike Eisenfeld of San Juan Citizens Alliance. "We refuse to compromise on the recognized fact that our continued reliance on coal-derived electricity takes an extraordinary toll on human life and the resources we depend on. The onus is on OSM to comply with NEPA."
"For over a half-century, our federal government has treated the San Juan River Basin like an industrial sacrifice zone," said Taylor McKinnon with the Center for Biological Diversity. "Judge Kane's decision will help turn that tide by forcing OSM to finally face evidence showing that relentless coal pollution harms families, the environment and endangered species."
"Families in the Navajo Nation and throughout the Four Corners region deserve clean air to breathe, clean water to drink and clear skies to enjoy. For far too long, these communities have borne the brunt of dangerous coal pollution," said Nellis Kennedy-Howard, Senior Campaign Representation for the Sierra Club's Beyond Coal campaign. "This decision will protect the health and well-being of families throughout the region from dangerous coal mining and pollution."
"This decision is a good step towards addressing the pervasive mercury and other coal related contamination found in New Mexico's rivers, lakes and streams," said Rachel Conn with Amigos Bravos.
Plaintiffs in the litigation are Diné CARE, San Juan Citizens Alliance, Amigos Bravos, Center for Biological Diversity, and Sierra Club. They are represented by the Western Environmental Law Center.
The April 2015 remedy order is available here.
The March 2015 court ruling is available here.
Background
Navajo Mine is located in San Juan County, N.M., on the Navajo Nation. The Four Corners Power Plant, which burns coal exclusively from the Navajo Mine, was built in 1962 and provides electricity to California, Arizona, New Mexico and Texas. Historically the Four Corners Power Plant was the largest coal-fired power plant source of nitrogen oxides (NOx) in the U.S. NOx is associated with respiratory disease, heart attacks and strokes. In recent years, Four Corners retired a quarter of its coal capacity to address this NOx pollution. While helpful, 1,500 megawatts of coal power still poisons communities and environment, and impedes clean energy transition efforts.
The legal action, brought under NEPA, challenged OSM's 2012 decision to expand strip mining operations by 714 acres to provide Four Corners with coal through 2016. That expansion was proposed in the wake of Diné CARE v. Klein (Diné CARE), 747 F. Supp. 2d 1234 (D. Colo. 2010). In that case, the U.S. District Court for the District of Colorado ruled that a previous proposal to strip mine all 3,800 acres of Area IV North violated NEPA and ordered OSM to revisit its analysis under the Act.
March's decision pivoted off mercury pollution concerns. Mercury pollution is a potent neurotoxin. Because of mercury pollution, including from the Navajo Mine and Four Corners complex, Colorado and New Mexico discourage fish consumption in the region. Federal studies show that 64 percent of endangered Colorado pikeminnow in the San Juan River contain levels of muscle tissue mercury that impair reproduction. In addition, the Navajo Mine and Four Corners complex create serious climate, public health and ecological issues.
Shortly after OSM approved the 2012 Navajo coal mine expansion, it initiated another environmental review to address coal mining and combustion operations beyond 2016 and, presumably, those operations' legacy of pollution to the region. A draft environmental review for those post-2016 operations was released in 2014. Unfortunately, that review was deeply flawed. Its resolution may help fix those flaws and address chronic legacy pollution issues caused by the Navajo Mine-Four Corners complex. 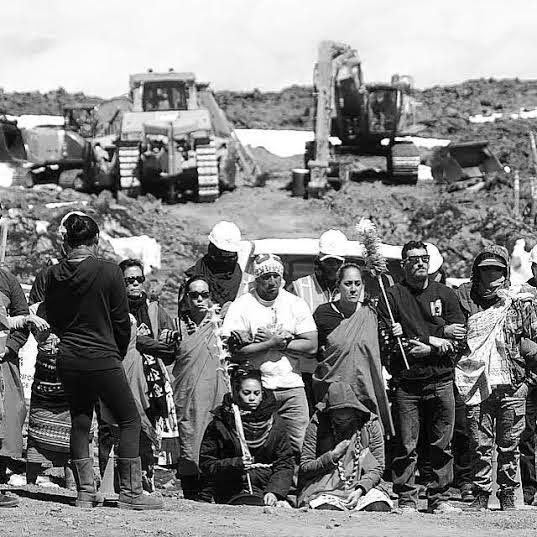 The warriors (or “protectors”) are protecting the mountain from the construction of a 30-meter telescope (TMT), which is a desecration of the most sacred place in the Hawaiian Islands. The peaceful protest has been ongoing for several years but in the past several months has gathered more momentum and support from Hawaiians and other non-Hawaiians around the world.

Please see the link below for background on the following statements:
http://www.hawaiinewsnow.com/story/28743527/gov-ige-announces-construction-of-telescope-on-mauna-kea-halted-for-1-week)

"Although the Sacred Mauna Kea Hui appreciates a welcome reprieve from the desecration of our sacred mountain summit and endangerment of our fresh water aquifer and endangered species environment, we know that these are still in danger unless a permanent moratorium is obtained.

This reprieve will also give the multi-billion dollar international TMT corporation, which has been allowed to circumvent the law, time to begin its process of identifying a new location outside of Hawaii for their TMT project.

We also hope this one-week moratorium will give the State of Hawaii, as well as the University of Hawaii and the Department of Land and Natural Resources the time needed to review the possible breaches of public trust the TMT project has caused. It will also give the DLNR time to review the possible abuses of the Conservation District Use Application process—a process that has permitted complete industrialization and desecration of a sacred conservation district and endangered species environment." (Kamahana Kealoha, Sacred Mauna Kea Hui Facilitator)

Supporters bailed out all of the detainees within hours of their arrests. Funds such as Sacred Mauna Kea continue to welcome donations to assist with any future bail. The group also is continuing to request donations for flights to and from Hawaiʻi between the other Hawaiian islands as well as much-needed accommodations, including food, ground transportation and other essentials. Visit www.gofundme.com/sacredmaunakea.

For more information and updates, visit http://sacredmaunakea.wordpress.com/. On Twitter #AOLETMT.

Previous article on the resistance at Censored News
http://bsnorrell.blogspot.com/2015/04/hawaii-mauna-kea-vigil-grows-defending.html
at April 08, 2015 No comments: