To the compas of the Sixth:
To the presumed attendees of the Seminar “Critical Thought Versus the Capitalist Hydra”:
We want to let you know that:
As of April 21, 2015, the number of people who have registered for the seminar “Critical Thought Versus the Capitalist Hydra” is approximately 1,074 men, women, others,i children, and elderly from Mexico and the world. Of this number:
558 people are adherents of the Sixth.
430 people are not adherents of the Sixth
82 people say they are from the free, autonomous, independent, alternative, or whatever-you-call-it media.
4 people are from the paid media (only one person from the paid media has been rejected, it was one of the three who were sponsored by the Chiapas state government to sully the name of the Zapatista compa professor Galeano and present his murderers as victims.)
Now then, we don’t know if among those 1,074 who have registered so far there might be a portion who have gotten confused and think that they have registered for Señorita Anahí’s wedding (apparently she’s marrying somebody from Chiapas, I’m not sure, but pay me no mind because here the world of politics and entertainment are easily confused… ah! There too? Didn’t I tell you?)
Anyway, I’m sharing the number of attendees because it’s many more than we had expected would attend the seminar/seedbed. Of course now that’s CIDECI’s problem, so… good luck!
What? Can people can still register? I think so, I’m not sure. When questioned by Los Tercios Compas, doctor Raymundo responded “no problem at all, in any case the number of people who will actually pay attention are far fewer.” Okay, okay, okay, he didn’t say that, but given the context he could have. What’s more, not even the doc knows how many people are going to come to CIDECI.
In any case, if you are engrossed by the high quality of the electoral campaigns and are reflecting profoundly on the crystal clear proposals of the various candidates, you should not waste your time on this critical thinking stuff.
Okay then, don’t forget your toothbrush, soap, and something to comb your hair.
From the concierge of the seminar/seedbed,
In search of the cat-dog,
SupGaleano.
Mexico, April 2015.
The Cat-Dog in the chat “Zapatista attention to the anti-zapatista client”:
(You are currently on hold, one of our advisors will be with you in a moment. If it takes awhile, it’s because we’re on pozol break.iii We thank you for your patience.)

Update May 12, 2015
Mexican officials used legal tactics to keep both Yaqui water rights defenders in jail for more months. It is unknown when they will be released.


Article by TeleSur TV
Photo on right: Water Rights Forum in Vicam, Sonora, by Brenda Norrell
http://www.telesurtv.net/english/news/Judge-Orders-Release-of-Jailed-Indigenous-Activist-in-Mexico-20150408-0028.html
Detained Yaqui Tribe leader and activist, Fernando Jimenez, recieved a favorable decision due to lack of evidence. A third circuit judge has issued an injunction in favor of Yaqui indigenous tribe spokesman, Fernando Jimenez, ordering the release of the jailed indigenous rights activist for lack of evidence against him. Jimenez, who has been imprisoned since September 23, 2014, was detained in the northern state of Sonora amid the context of the Yaqui Tribe’s protests in defense of the Yaqui River. According to the Mexican Center for Environmental Law (Cemda), which made the information public, the judge’s ruling, on Tuesday, represents the states participation in violating Jimenez’s human rights for ordering his imprisonment without due process. Jimenez was arrested only days after Mario Luna, another prominent spokesman and activist of the Yaqui Tribe, was detained under the same circumstances. The two are accused of illegal deprivation of liberty and carjacking, after members of the Yaqui Tribe stopped a man who attempted to drive into their protest roadblock. In January, Luna also received a favorable court order for his release stipulating that at the time of Luna’s consignment to prison the state neglected to admit the defense’s evidence. Both Luna and Jimenez have led the Yaqui Tribe’s protests since 2010 against a state-sponsored mega aqueduct project that pumps water from the Yaqui River to urban centers such the Sonora state capital, Hermosillo. The 172 km long project transports more than 60 million cubic meters of water per year from the Novillo dam, which is fed by the Yaqui River, to supply Hermosillo and the large agroindustry in the region. The project openly violates a 1940 presidential decree by then president Lazaro Cardenas, which guarantees that at least 50 percent of the water from the Yaqui River pertains to the Yaqui Tribe.

This content was originally published by teleSUR at the following address:


http://www.telesurtv.net/english/news/Judge-Orders-Release-of-Jailed-Indigenous-Activist-in-Mexico-20150408-0028.html. If you intend to use it, please cite the source and provide a link to the original article. www.teleSURtv.net/english

kahentinetha, P.O. Box 991, kahnwake [Quebec Canada] J0L 1B0.
April 11, 2015.
Gen. Sir Peter Wall, KCB CBE ADC Gen, Chief of the General Staff, UK Army, MOD Main Building, Whitehall, London, SW1A 2HB
Dear Sir:
As you have been previously alerted by our ahserakowa of kanekotah, thahoketoteh, we write today to remind you of the order you are under. You have a copy of Captain General Sir Frederick Haldimand’s order he left for you. We provide you another.

Halidmand Proclamation 1784 making Kanekotah the only UK military protectorate for the Mohawks in the world.
This issue has now come before the Iroquois Confederate Council. We put you on notice of your legal requirement to follow military law and do as your General ordered in 1784. “Due to the early attachment of the Mohawks and the loss of their settlements in the American states”, “we have purchased a tract of land, six miles from each side of the Grand River, starting at Lake Erie and extending in that proportion to the head of said river, which them and their posterity shall enjoy forever”.
You are legally required to follow this order. Due to the colonial settlerism issues, we require your physical presence in kanekotah when we move to our tract. We would like to do this in June 2015.

Your house in kanekota is waiting for you.
The Canadian courts have neglected this Royal Proclamation. It is a Royal Proclamation because of the title “Captain General”. We now come to you with one mind and demand your protection for our people.
In 1947 the British Army built a mansion you can occupy in the Hamlet of Hornings Mills, kanekotah. I forward you a copy of the Royal Proclamation from the Captain General, Sir Frederick Halidmand, and the survey we had done at the Queen’s Printer of Ontario. I would like to talk with you on the telephone. Please call me when you get this letter at . . . . , email:kahentinetha2@mohawknationnews.com. Thank you in advance for your help in this matter.
kahentinetha, bear clanmother, kanekotah.
The British have already set the precedent on this legality when they invaded Palestine to create Israel in 1947. They claimed their legality through the Balfour Declaration, which is not really a royal proclamation since it was not signed by a Captain General or a King. These are the only entities that can make a royal proclamation. Now the British Army must carry out their legal requirements and protect 6 miles from the source of the Grand River, as per the attached survey we have done by the Queens Printer of Ontario. [map].

We require physical signs everywhere to indicate that people are entering a British military protectorate under the laws of the Kaia’nere:kowa.

As Gene Autry laments, “The Red Man was pressed from this part of the West, it’s not likely he’ll ever return. To the banks of the Red River, where seldom, if ever, his flickering campfires still burn, home on the range.” [Home on the range].
MNN Mohawk Nation Newskahentinetha2@mohawknationnews.com For more news, books, workshops, to donate and sign up for MNN newsletters, go towww.mohawknationnews.com  More stories at MNN Archives.  Address:  Box 991, Kahnawake [Quebec, Canada] J0L thahoketoteh@hotmail.com for original Mohawk music visit thahoketoteh.ws 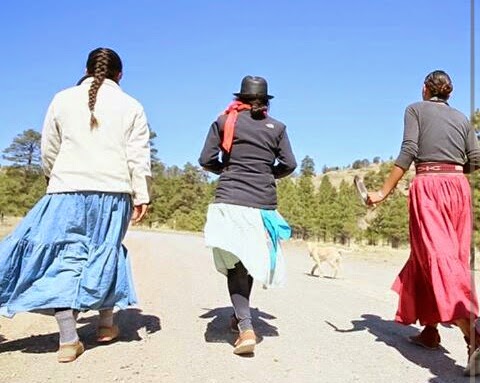 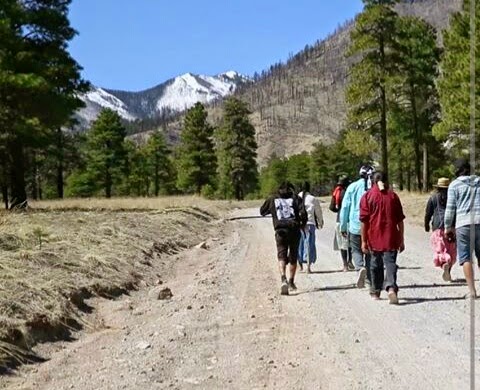 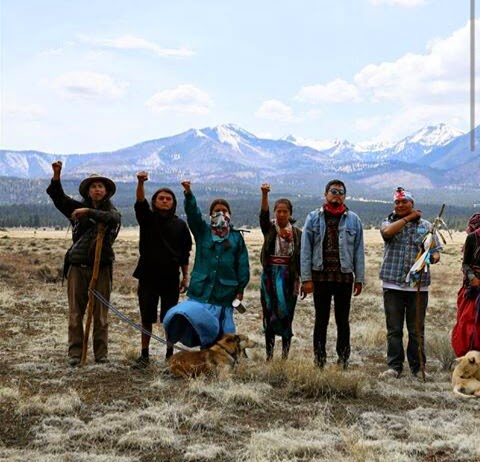 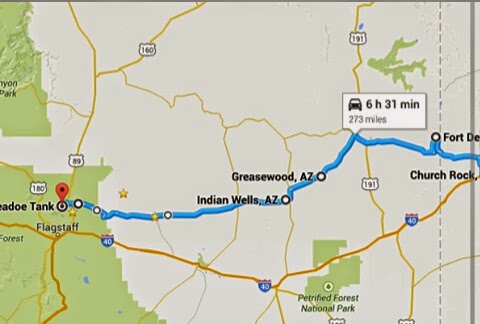 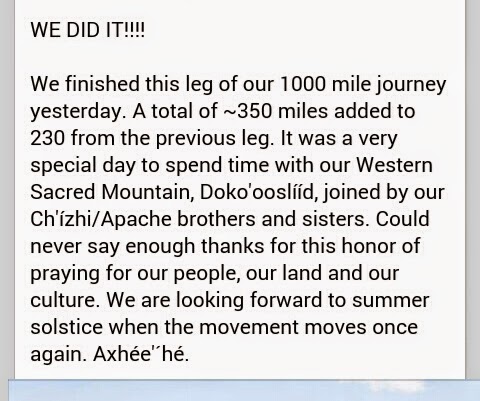 Thank you to the Nihigaal bee line, Journey for Existence, for walking to the Four Sacred Mountains and speaking out against the ongoing genocide of oil and gas drilling, fracking and coal mining. Thank you for sharing your journey with Censored News and our readers around the world.
-- Brenda, Censored News
at April 24, 2015 No comments: