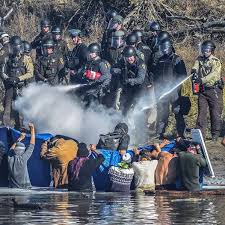 It is a good moment in time for Mother Earth and SacredWater. The United States Army Corp of Engineers denied the permit that would have allowed Dakota Access Pipeline of Energy Transfer Partners to drill under the Mni Sose (Missouri River) in our Lakota Territory.
Since August of this year, many people put their lives aside and gave all to fight the Black Snake. Many people from all four directions prayed for our water to be protected from the Black Snake DAPL. Many water warriors stood the frontline and were chewed up by the meat grinder of North Dakota, surrounding states, the National Guard, and DAPL hired security firms. Arms were shot off. Eyes were blown out. Skulls were broken. Bones were broken. Frontline water warriors never surrendered, never backed down from the FAT TAKER. Politicians worked hard to lobby for support. Attorneys worked hard. Everyone did the best we could. As I mentioned in the battle to shut down the KXL of TransCanada, we are all threads in the fabric of resistance.
We must not rest easy. We must not trust this enemy of Mother Earth to go away. DAPL may decide to drill on, and simply pay the fine for drilling without a permit. DAPL may trick the decision makers to accept the Black Snake inside perimeters, but it will still be inside the perimeter.
Hundreds of people went to jail, some are facing serious charges that can land them locked in jail for decades, for simply doing their jobs as media and medics. Some for being grabbed up in police sweeps long after an action was completed. Some for being set up by DAPL and police informers, infiltrators and provocateurs. Many lives have been changed forever by being engaged in this battle for the past 5 months.
Individuals have formed bonds with others, creating new family. The bonds of frontline battle never go away. No one can understand this, if one has not gone through this experience. The PTSD never goes away either. The sound of airplanes flying low overhead, of helicopters chop chop chopping 24 hours a day. One does not forget that sound. For many, this has been the experience of a lifetime and they will go away with fond remembrances, never to be in such a camp again. For a lot of us, we will carry on with our work, make our prayers, put our lives back together the best way we can once we get home, if we still have a home to go back to. Rest awhile, refresh, eat and sleep-and prepare for the next battle. Thats what water warriors do. Thats what Black Snake Killas do.
America is a huge beast, FAT TAKER is a huge beast. European banks are a huge beast. FAT TAKER is never satisfied. FAT TAKER always wants more. It took the generosity of millions of people to donate and keep donating, to the people in all the camps. We could not have done it without that generosity. All the attorneys, politicians, organizers who worked non-stop, all that work was necessary. But we cannot rest now. The Black Snake may be hibernating, resting to come at us again. Stay vigilant. Our SacredWater needs us. All of us. The many generations, the many races of humans, the many religions of people.
As long as there is one Indian left, there will be a fight for the land and the water. As long as the water flows, as long as the sweet grass grows, we must keep our eyes open and watch for FAT TAKER.
at December 05, 2016

You put my mind at ease. This Victory is not guaranteed. The can was kicked down the road and Trump has other ideas otherwise he would not have invested in DAPL. I agree the black snake has only gone asleep

Energy Transfer Partners company says it's lost $100 million dollars on Dakota access pipeline.
But their family members and children have not lost an eye,
an arm,
do not have brain injury or broken bones;
trauma or hypothermia,
chemical poisoning...
And water protectors want everyone to be able to live with peace, to have a beautiful earth. Clean water.
Kelcy, poor people and Indigenous people are not so despicable that they deserve to die.
We all deserve to have food to eat and water to drink.
Turtle Island didn't used to stink so bad
turtle Island didn't used to stink so bad.
Could Good cleaner energy be developed?