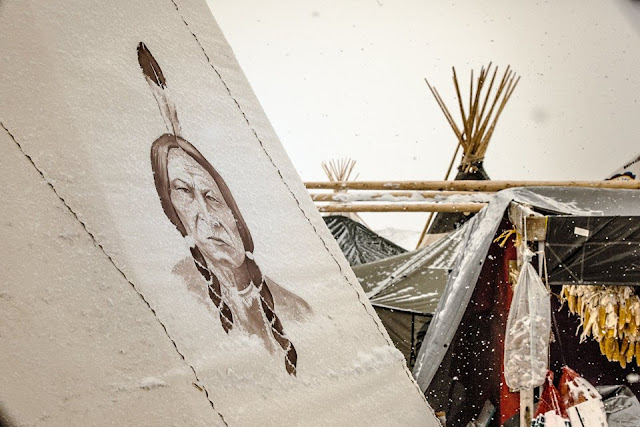 Thousands of Native Americans and their allies remain camped in Standing Rock Camp, where a blizzard and subzero temperatures, and opposition, have emboldened them in their struggle to halt Dakota Access Pipeline.
By Brenda Norrell
Photo by Ayse Gursoz
At Standing Rock Camp, Warriors gathered tonight to dispel rumors, and speak of the great power here. Chase Iron Eyes said there is a new beginning at All Nations Camp, where the people refuse to forsake their ancestors, or abandon the struggle.
Nataani Means spoke of his father Russell Means and the Treaties.
Atsa E'sha Hoferer, Paiute, Shoshone, Creek and Seminole, said it is the time for the younger generation to fight for Mother Earth. "She is hurting." Atsa said he comes from the homeland of Wovoka. Atsa is here with a descendant of Wovoka who brought the Ghost Dance.
"We brought our prayers here, just like in the 1890s." Wovoka's dream was that if we all continue together, and keep our prayers strong, our ancestors will come back and protect us.
Standing Rock tribal members welcomed those to camp who can endure the harsh winter and work hard. These are the voices of survivors, these are the voices of Warriors, Water Warriors. Listen to more on the live video below from tonight.
In other news, the water protectors are battling on the legal front, and in the courts.
Standing Rock water protectors are being subpoenaed by a Grand Jury in a desperate attempt by the United States to vilify and criminalize water protectors.
The Grand Jury probes in the United States have long been a scheme for prosecutors to gain access to confidential information and an attempt to have friends testify against one another. The unlawful use of the Grand Jury has for decades targeted activists in the United States, seeking to dismantle movements and imprison those who are most vocal or productive. Read Standing Rock Water Protectors Targeted by Grand Jury, U.S. Desperate Scheme for Big OIl http://bsnorrell.blogspot.com/2016/12/grand-jury-probe-targets-standing-rock.html
Watch video and read more from Standing Rock water protectors at All Nations Camp, late Saturday night: http://bsnorrell.blogspot.com/2016/12/live-all-nations-camp-rises-carrying-on.html
at December 11, 2016