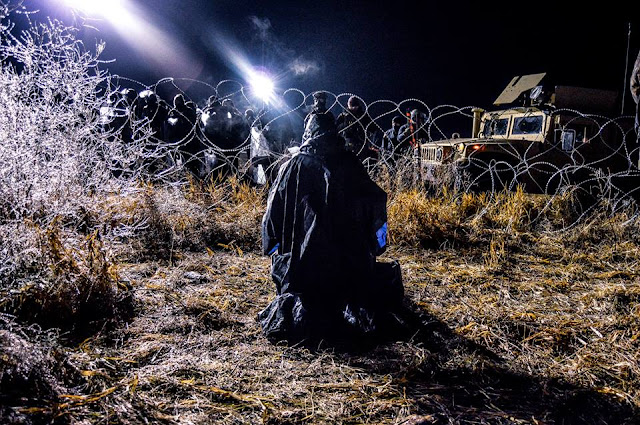 Photo -- A Water Protector covered in ice continues to pray in spite of the criminal police violence on the front line on Nov. 20 when hundreds of water protectors were injured on Backwater Bridge. Photo by Rob Wilson Photography

BISMARCK, North Dakota -- Standing Rock water protectors are being subpoenaed in a desperate attempt by the United States to vilify and criminalize water protectors.
The Grand Jury probes in the United States have long been a scheme for prosecutors to gain access to confidential information and an attempt to have friends testify against one another. The unlawful use of the Grand Jury has targeted activists in the United States, seeking to dismantle movements and imprison those who are most vocal or productive.
The Grand Jury probe of Standing Rock water protectors comes as Energy Transfer Partners, and the co-opted Morton County Sheriff and Governor of North Dakota, are pushing for the Dakota Access Pipeline to be completed.
The State of North Dakota, and the Morton County Sheriff have engaged in systematic abuse of human rights and police have acted with blatant excessive force.
North Dakota Gov. Jack Dalrymple and Morton County Sheriff Kyle Kirchmeier are responsible for water protectors being shot with rubber bullets, maced, beaten with batons, sprayed in the face with pepper spray, blasted with fire hoses in freezing temperatures, strip-searched and marked with numbers on their arms and caged in "dog kennels" in jail without sufficient clothing, water or food.
Numerous young women have been seriously injured. One young Navajo woman has lost sight in her eye after being hit with a police projectile. A young woman from New York had her arm shattered by a concussion grenade shot by police. Doctors are performing reconstructive surgery to save her arm. One young Native woman had her wrist fractured twice.
Many other water protectors have been shot with rubber bullets, resulting in bloody gashes to their head and coughing up blood.
The police responsible now face a federal lawsuit for excessive force.
Morton County Sheriff Kyle Kirchmeier has engaged in a public misinformation campaign, stating a steady stream of lies about the water protectors to the broadcast and print media. The media has repeated these lies without fact checking, or maintaining the ethics of journalism.
Currently, a Grand Jury has been called as Dakota Access Pipeline has been stalled.
DAPL is desperate to complete its billion dollar crude oil pipeline, by drilling under the water of the Missouri River, creating the potential of a poisoned water supply for millions of people.
The Water Protector Legal Collective has confirmed that a federal grand jury had been convened in North Dakota in relation to water protectors.
"Grand juries have historically been used to target resistance movements and create political prisoners," the Water Protector Legal Collective said.
"Water Protector Legal Collective is offering camp-wide grand jury resistance education. Please contact us at 605.519.8180 if you have been contacted by federal authorities or have been served with a subpoena related to water protection activities."
The National Lawyers Guild has issued guidance for individuals who have received a Grand Jury subpoena.
If a person does not respond to the subpoena, this person could be held in contempt of court. Persons subpoenaed can not have a lawyer present when questioned -- but can have an attorney in the hall. During questioning, the person can ask to speak with an attorney before answering each question.
Those subpoenaed do not have the right to remain silent when questioned.
Those subpoenaed should obtain an attorney and beware of any attorney that advises them to provide information on friends in exchange for deals with prosecutors.

National Lawyers Guild -- Know Your Rights
What to do if you are subpoenaed by a grand jury.
https://www.nlg.org/wp-content/uploads/2016/04/kyrpamphlet-Eng-May-2015-FINAL.pdf

I'd like to thank Mark Sullivan, one of the lawyers for Oceti Sakowin people. Mark you are bomb. You are 1 of us, and I'm proud to know you. When I was in ND you were camped there living the fight, along with the rest of us. You kept us informed on the legal battles front as welll as defending indivuals in their fight against Morton County incarceration. I commend you. Your past battles with big oil have been well documented and admirable. You go Mark

The heat is on and now they trying to twist their sorry story even more. The protectors will win in the end !!!! BLESS EM ALL !!!!

What grand jury? Where? Too vague.