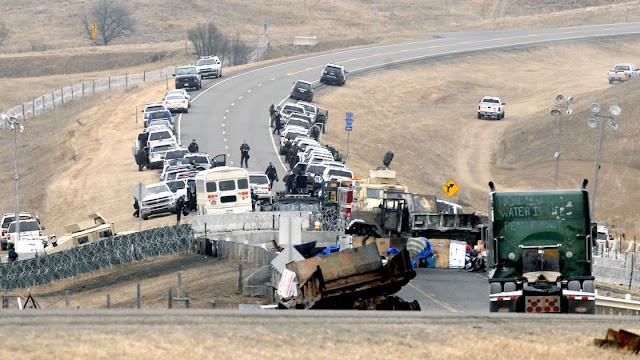 Attorneys Call on Morton County to Remove Illegal Blockade of Hwy 1806 to Water Protector CampsBy Water Protector Legal Collective
Censored News
December 14, 2016https://www.nlg.org/wplc-calls-on-morton-county-to-remove-illegal-blockade-of-hwy-1806-to-water-protector-camps/
MANDAN, North Dakota -- The Water Protector Legal Collective (WPLC), an initiative of the National Lawyers Guild (NLG), sent a letter yesterday to the Morton County Commission and Sheriff’s Department calling for the immediate removal of barriers blocking a section of Highway 1806 near the Water Protector campsites in the interest of public safety, health, human, and constitutional rights.
“This blockade, once again, shows the historic, unchecked discrimination against Native people,” said Brandy Toelupe, WPLC President. “That the Morton County Commission and Sheriff would illegally endanger everyone in the area in order to punish Water Protectors is something we will take every legal step to end.”
The letter by WPLC, which is helping coordinate legal support for Water Protectors and all others negatively affected by the Dakota Access Pipeline, called the blockade illegal; a safety and health risk; and violation of the rights to travel, demonstrate, and pray. The blockade on Highway 1806 has been in place at the Backwater Bridge since October 28, 2016 and blocks all pedestrian and vehicular travel.
“By preventing all vehicles – including emergency vehicles – from traveling on this portion of Highway 1806, your blockade has endangered the safety of the thousands of individuals who reside in this area and who visit the camps located alongside of the Cannonball River, as well as the neighboring businesses both north and south of the blockade,” the letter stated.
Last month, the blockade delayed emergency vehicles attempting to reach the hundreds of Water Protectors who were injured by water cannons, chemical weapons and munitions deployed by law enforcement during a peaceful protest on November 20.
WPLC also states that the letter is meant to serve as official notice to Morton County, and that legal action will be taken if the roadblock is not removed immediately and full travel allowed. Read the full letter here.
The Water Protector Legal Collective is the National Lawyers Guild legal support team for those engaged in resistance to the Dakota Access Pipeline. It maintains a 24/7 presence on-site at the Oceti Sakowin camp near Cannon Ball, North Dakota.------------------
Contact: Brandy Toelupe, WPLC President (720) 876-8300 | Btoelupe@tildentoelupe.comRobin Martinez, WPLC Secretary: (816) 694-6304 | robin.martinez@martinezlaw.netTasha Moro, NLG Communications Director: (212) 679-5100, ext. 15 | communications@nlg.org
Tasha MoroNational Lawyers GuildDirector of Communications 212-679-5100, ext. 15#Facebook/NLGNational | @NLGNewswww.nlg.org
Posted by Censored News, publisher Brenda Norrell at December 15, 2016

Electronic monitoring alarms did not go off; leak discovered by
a landowner on DECEMBER 5, 2016.

EFFORTS to CONTAIN the CRUDE OIL DISASTER were DELAYED by the COLD WEATHER,
SLOW RESPONSE,
& exactly how many responders, equipment, emergency plan ???

The day the Army Corp denied the permit to DAPL, another pipeline in northwest ND was splitting open gushing out toxic crude oil onto the land and into the water.
Dead animals were found in the area, including cows, poisoned by the toxic waste.

And there is No 'Clean Up'; dispersants (like Corexit) added to the oil may increase the TOXICITY of the oil, making the oil 52 times more toxic!!

Another 'Clean Up' is to burn the oil which pollutes the air!

This is oil disaster information.
Sirens go off when a tornado is spotted, weather alerts for storms, how about a siren and emergency alert whenever there is an oil spill ??
Like the AMBER ALERTS ??