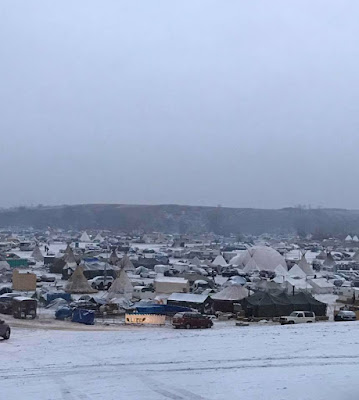 MANDAN, North Dakota: The first trial of those charged in the resistance to construction of the Dakota Access Pipeline (DAPL) begins on Monday, December 19 in Morton County, North Dakota. Monday's trial is the first of multiple jury trials scheduled to occur during the last two weeks of December; all of the accusations stem from police response to the global outpouring of support for the resistance based out of the Standing Rock Sioux Tribe reservation and treaty territory. To date police have arrested more than 550 Water Protectors during incidents of prayer and disruption of the DAPL construction, and trials are scheduled to continue through the spring.
The Water Protectors scheduled for trial remain firm in their defense of the Standing Rock Sioux tribal sovereignty and the tribe’s desire to prevent the construction of DAPL on sacred land set aside for the Sioux by the Fort Laramie Treaty of 1851. The Water Protectors’ actions arose in response to neglect by corporate, federal and state institutions of Standing Rock's right to self-determination.
To date the Morton County courts have denied requests made by Water Protectors that the courts recognize the Water Protectors’ actions as protected by the First Amendment, which guarantees freedom of speech, freedom of religion and religious practice, and right to free assembly. The Morton County court has engaged in potential violations of the Sixth Amendment right to counsel through a pattern and practice of delayed appointment of defense attorneys for the Water Protectors until the eve of trial.
Last week Assistant State’s Attorney Ladd Erikson asked the Morton County District Court enter an order to prevent the accused or their attorneys from talking to the jury about issues of indigenous sovereignty and land rights during trial. The resistance to DAPL has garnered worldwide attention and support. In a request about evidence allowed to be presented at the first trial Erikson writes, “There is no relevance to any testimony or evidence regarding: Historical treaties between the U.S. Government and the Sioux Nation; [or] tribal sovereignty…”
“Erikson’s invisiblization of the genocide of the Indigenous people of this land cuts to heart of why DAPL chose this site to build and why thousands of Indigenous people and their Allies from around the world have felt compelled to resist.” Said Paul Estate, a supporter of the Water Protectors.
Angela Bibens of The Water Protector Legal Collective discusses North Dakota Prosecutor Ladd Erickson's Motions Against Water Protectors:www.vimeo.com/196233250
The Water Protector Legal Collective is the on-the-ground legal support team at the encampment adjacent to the Standing Rock Sioux Reservation in North Dakota, formed in opposition to the construction of the Dakota Access Pipeline.

Someone needs to ask ALL the Courts. If Attorney Ladd Erickson has had any personal contact from the DAPL Company or any of its associates, Directly or Indirectly through a third party, any Politicians from any States [including paid/unpaid States/Washington Lobbyists hired to speak/make - contact with Attorney Ladd Erickson over the past months or so?] via Letters, Written Notes, Emails, Fax, Phone or Text Messages from his phone or Social Media.
Even Gifts to his office with Notes attached [such as flowers etc].

If so then the State Courts should have Attorney Ladd Erickson RECUSE himself from all and every case before the courts in connection with the 566 or more people due for appearances.
An independent DOJ Ombudsman from DC needs to be put in place to oversee each and every case being presented to the courts.
The law must be seen to be impartial and free from corruption by implication to avert true justice and not be on a witch-hunt at the expense of his Ego and Federal Taxpayers $$$$, including all who are implicated/associated with him if the above is found to be true. All must be held accountable for there actions and prosecuted accordingly.