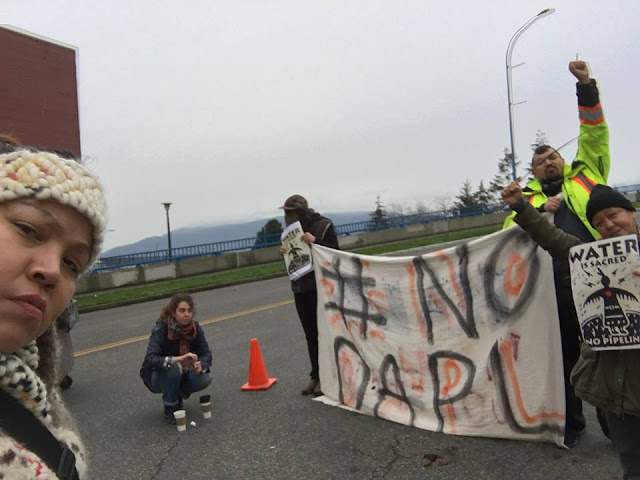 From Vancouver BC so called kkkanada #NODAPL BLOCKADE!
CALL TO ACTION

In response to CALL TO ACTION Re; Dec 5th evacuation notice.
In Solidarity with Red Warrior Camp #Blacksnakekillas at Standing Rock.
We are joining the Day of Action, Shut down the banks, with Climate Convergence today with added agenda items including a Blockade.
This is a call out for reinforcements, supports, and bodies to HOLD THE LINE at the actual physical blockade. This Blockade is upon direct request from front line warriors currently at Red Warrior Camp at Standing Rock, and to show solidarity with them and their direct actions, which have kept the Black Snake at bay up until this point. also costing the corporations which are paying for the Pipeline construction over 100 million dollars to this date.
Please Advise if you are able to attend, or know people who will attend.
We are currently blockading the Port bridge at Main Street and Alexander.
In Solidarity;
West Coast Women's Warrior Society
Posted by Censored News, publisher Brenda Norrell at December 01, 2016