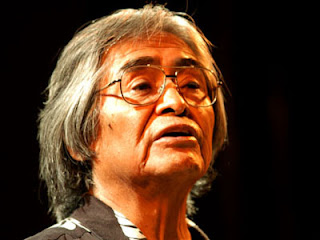 Thank you Simon Ortiz, Acoma Pueblo professor, author and poet, for your words. Simon is responding to Chili Yazzie's column today, from the Dine' Vets at Standing Rock. Chili's column is at: http://bsnorrell.blogspot.com/2016/12/chile-yazzie-dine-veterans-at-standing.html

"We know they're conniving, deceitful...
and very determined."

I agree with him.

Further, the denial of the permit by Army Corps of Engineers is a lie. They even admit it by saying--because they know--DAPL will keep on drilling.

Hillary and Obama even foretold it by telling the nation "to give Trump a chance."

It's the lie, the same old deadly lie, lie, lie that has strangled the nation, Indigenous, white, black, racist, non-racist.

Lie, lie, lie, lie by the liars, thieves, and killers who are conniving, deceitful, and very determined.

It is how America became great. Lie upon lie upon lie.

Simon J. Ortiz--Hihdruutsi is his Aacqumeh name--is an Aacqumeh person first. He is Regents Professor of English and American Indian Studies at Arizona State University, author of Woven Stone, from Sand Creek, Out There Somewhere, Men on the Moon, Speaking for the Generations, Beyond the Reach of Time and Change, and many other books. He is former 1st Lt. Governor and tribal Interpreter of Aacqu tribal nation, and he is the father of 3 children and 10 grandchildren.
at December 06, 2016

No more lies.
Why aren't the people talking holding an eagle feather?
Talk straight.
Chili didn't hold back he came out and said his truth.
Mainstream education teaches students to be good liars, convincing arguments for any side, no matter if its true.
Some politicians talk crap.
Or they never say anything to the public.
Like company CEO's do not address the public, only stockholders.
Or media.
No more COMPLICITY.
NO MORE COMPLICITY.
No more going along with the Lies.

WHAT'S WORSE THAN A RACIST?
A LIAR.

A huge LIE is the American Dream for all people ...it's only for the 1%.
Another is that America welcomes diversity , how can that be with all the white entitled secret racists.