Concrete Worker Drives Truck into Crowd of Water Protectors, Fires Gun Above Them

Irate Concrete Worker Drives Truck into Crowd of Women, Children and Elderly Water Protectors, Firing His Gun above their heads

MANDAN, North Dakota -- This concrete worker drove his truck into the crowd of water protectors during a prayer walk and ceremony today in Mandan, and fired his gun repeatedly above their heads and then into the crowd. At least two people were injured when hit by the truck.  (The photo of the attacker is above and verified in the video below.)
One water protector said, "Friends at Standing Rock, please be safe, this man just plowed through a peaceful prayer ceremony waving a gun, injuring 2 people and then proceeded to fire 7 shots into the air. Women, children and elders all running to get out of the way."
The phone number was on the truck, which was identified as Four Square Concrete of Bismarck, North Dakota, 701-202-2107.
The water protector said, "This is why we must continue to organize and do so in love -- THIS is what we are facing."
Four Square Concrete of Bismarck is owned by Leonard Leingang, who has been tentatively identified as the driver of the truck firing the gun shown here. The license plate is # 4SQR1 ND VIN#: 1GDM7H1J0SJ514720. It is 1995 GMC TopKick.
Water protectors and online researchers supporting them provided these facts. The photo and videos are live from water protectors today.
UPDATE Nov. 17, 2016 -- As of today, the Morton County Sheriff had not arrested Leonard Leingang for firiing his gun into the crowd and intentionally driving into water protectors, resulting in injury to two people.


Above: Pickup drives into crowd at today's ceremony. Shots fired
into air.

Below -- Prayer Ceremony. Shots fired in air from truck during ceremony this morning. Watch live below. 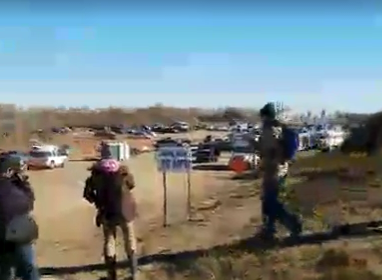