Watch video below by Real Peoples Media as Ontario Provincial Police attacked Tyendinaga Mohawks at the rail blockade in solidarity with Wet'suwet'en Hereditary Chiefs, on Monday morning. Mohawks were actually off the side of the tracks and not on the tracks. There were 10 arrests.

Photo below: Listen to their song at the Tyendinaga rail blockade on Monday evening. Video by Real Peoples Media.  https://www.facebook.com/realpeoplesmedia2016/videos/538047556837665/ 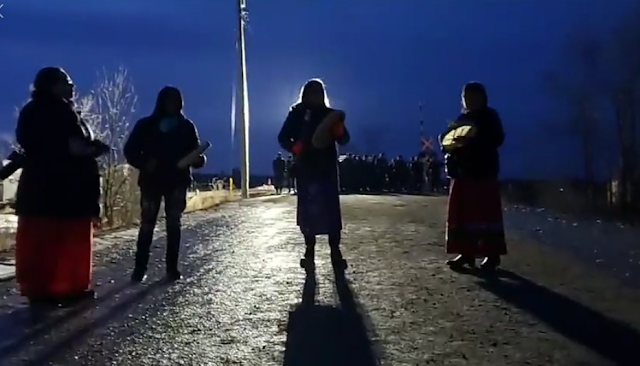 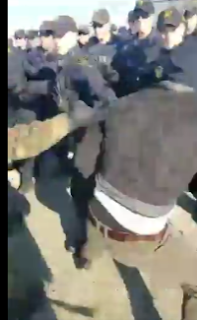 Christopher Curtis said on Twitter, "The Mohawks in Kanesatake shut down their community to the outside world, disrupting their own economy to show solidarity with the people of Tyendinaga arrested in today's OPP raid. People left school, left their jobs, put their lives on hold to mount a resistance." 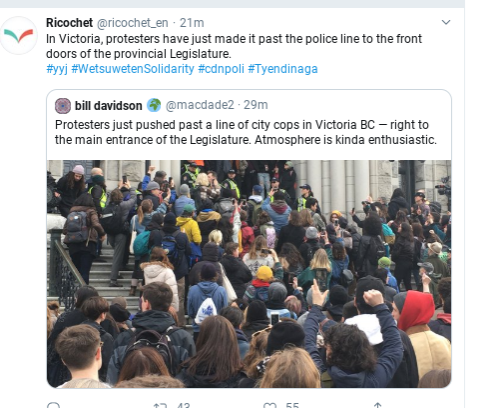 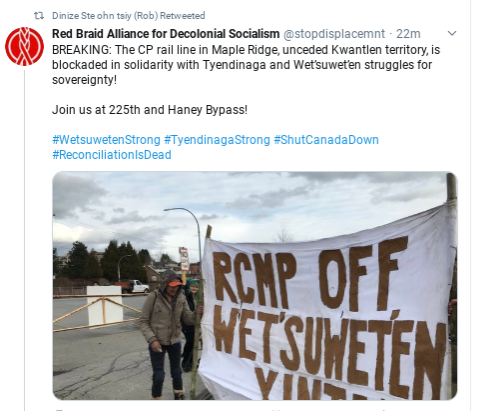 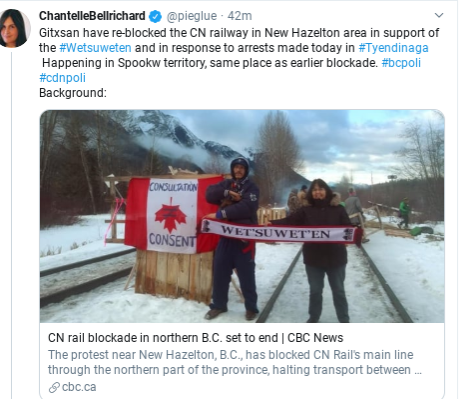 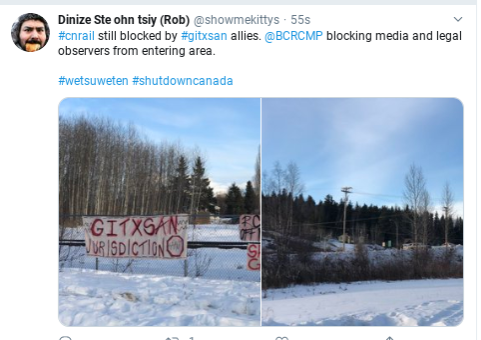 More actions in Shut Down Canada on Facebook at:
https://www.facebook.com/brenda.norrell.90
at February 24, 2020 No comments: 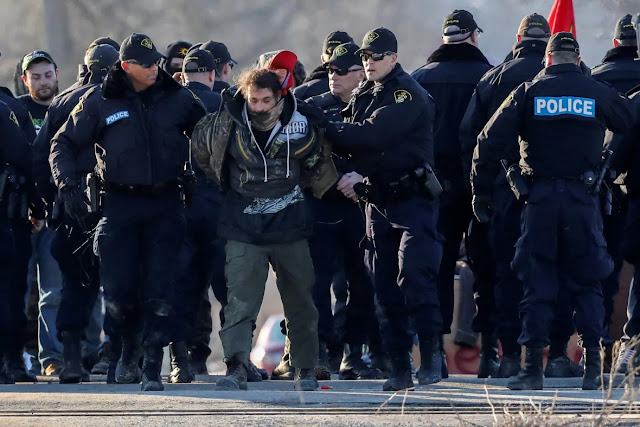 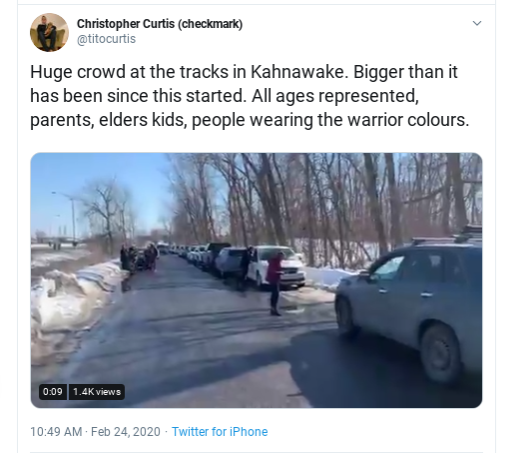 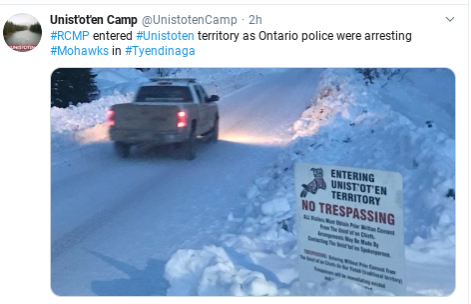 Kanehsatake is blocking any traffic from coming in, to raise awareness of Tyendinaga arrests this morning by OPP and in solidarity with Wet’suwet’en.
. 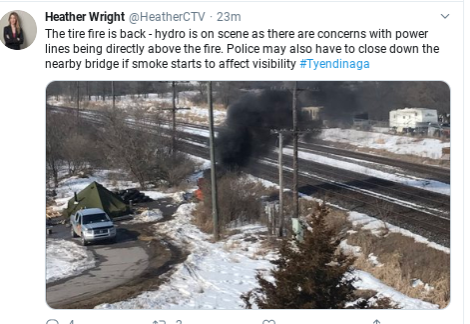 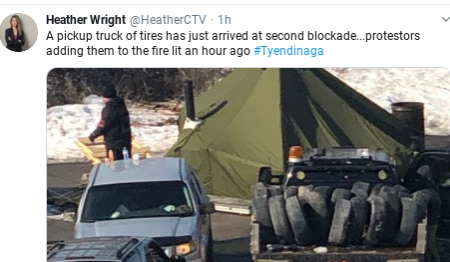 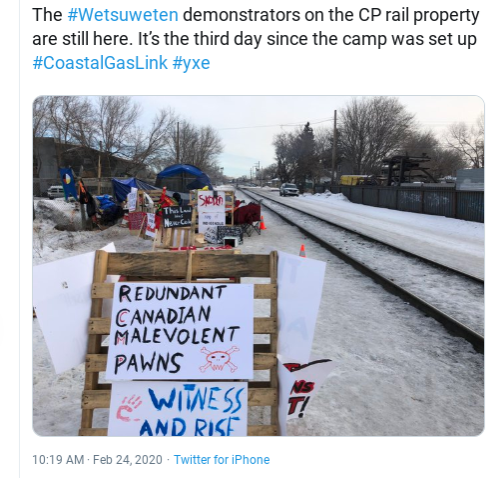 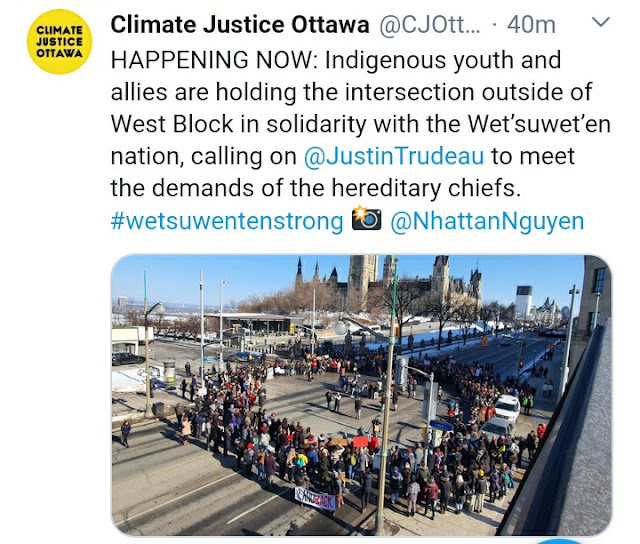 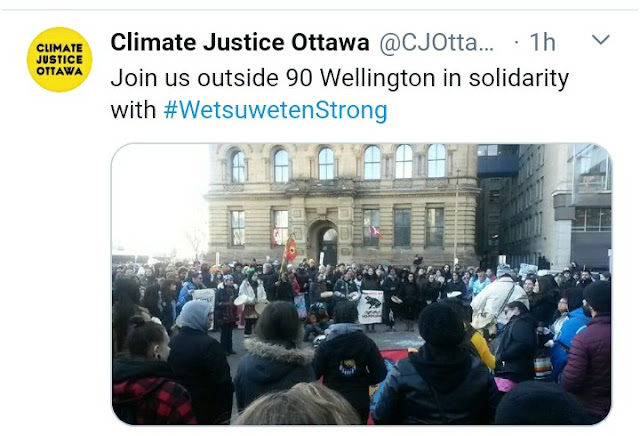 
Christi Belcourt: "From Tyendinaga. There are about a dozen people here and 100 police in a line. They arrested about 10 warriors. The police have their drones above."


"Canada is committing human rights abuses. They removed Indigenous people from their land at gunpoint. Unceded land to which they hold no titles. And they have broken their own laws to do it. Shame on Canada." Photo update Censored News
Below at 1 am Monday: Tyendinaga ready for them

Below update from Christi Belcourt 1 am Monday


As this is the birthplace of the Peacemaker, our responsibility is to uphold peace. We ask that the OPP refrain from the use of force and allow for a peaceful resolution. At this time we are presently in communication with Minister Miller and the OPP Liaison to resolve this matter.


We are being informed by Minister Miller to expect confirmation of RCMP removal from Wet’suwet’en territory soon.


There has always and continues to be, a willingness from the Tyendinaga Mohawks to discuss an exit strategy of the CN Rail Main Line.


We are currently waiting on confirmation from the Wet’suwet’en Hereditary Chiefs that the RCMP have left Wet’suwet’en territory as they have just arrived home from visiting our lands.


We want to remind the public that we have never physically obstructed the tracks and we have been in peaceful solidarity with the Wet’suwet’en.


The train tracks run through Tyendinaga Mohawk Territory as established by the Simcoe Deed of 1793, Treaty 3 ½.


The Mohawks of Tyendinaga are not in violation of the injunction filed on February 7, 2020.


1. There is no trespassing on CN’s railway right-of-way at Mile Point 209, as this is Tyendinaga Territory as proclaimed by the Simcoe Deed of 1793.
2. There is no physical interference or obstruction of the railway tracks.


The pending issue is that:


a) The RCMP have not left Wet’suet’en Territory;


b) We have not had the follow-up meeting with Minister Marc Miller as agreed;


c) There are families whose safety and lives are at risk, if any use of force were to occur.


We remain optimistic that this will be resolved speedily.

Earlier:
Sunday 5 pm: Mohawks advised us that the Ontario Provincial Police told Mohawks they have to clear their camps in Tyendinaga, Ontario by midnight tonight or face possible charges.
Mohawks said they have no plans to leave.

Below: Video by Real Peoples Media


CBC reports:
Ontario Provincial Police and CN Rail have told the Mohawks they have to clear their camps in Tyendinaga, Ont., by midnight ET tonight or they will face a police investigation and charges, Tyendinaga Mohawk Seth Lefort tells CBC News.

The Globe and Mail reports:

But on Sunday, the police warned protesters that they could no longer stand by, said Andrew Brant, who is from the Tyendinaga Mohawk Territory and has taken part in the blockade.
Mr. Brant said the OPP met with members of the Mohawk community on Sunday afternoon and told them they had to take down their blockade by midnight.
“The OPP says we have to get off the tracks or everybody will be charged,” Mr. Brant told The Globe and Mail.

OPP did not respond to a request for comment.
Read more: https://www.theglobeandmail.com/canada/article-opp-warns-of-arrests-if-tyendinaga-blockade-isnt-dismantled-sunday/

The RCMP have increased patrols on Wet'suwet'en lands and have not vacated the territory.
Below, today, Sunday, on Twitter. Video on Twitter. 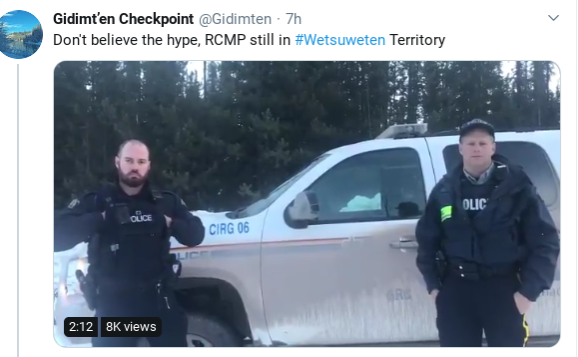 The crowds swell as rail blockades expand, following Trudeau's statement that all rail blockades must end now.
Below: Toronto Round Dance Feb. 22 in support of Wet'suwet'en
https://twitter.com/i/status/1231304164585738240 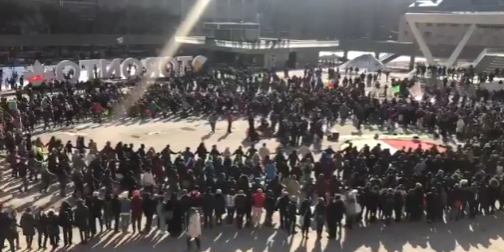