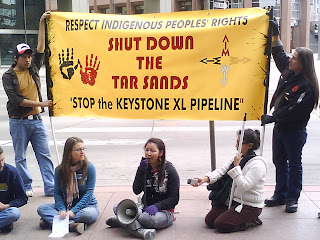 By TessaMcLean, Anishinaabe, American Indian Movement Colorado leader
Censored News
DENVER -- On November 5th, 2011, The American Indian Movement of Colorado (AIM) rallied with Occupy Denver and 350.org Colorado at noon and later marched to the Canadian Consul located in downtown Denver to protest the Keystone XL pipeline; the action was in solidarity for the White House action on November 6th.
Leaders from Colorado AIM, such as Glenn Morris, Tessa McLean and Scott Denver Jacket spoke at the rally where over a hundred AIM members and climate rights groups came together.  AIM leaders were present to bring awareness to the Indigenous issues at stake with the proposed Keystone XL Pipeline. The pipeline would cross at least five Indian reservations, not only this but the tar sands are on the Cree’s traditional homelands in Alberta, Canada. Observers and people present for the rally listened with open ears and were eager to offer help to the Indigenous struggle against the tar sands. 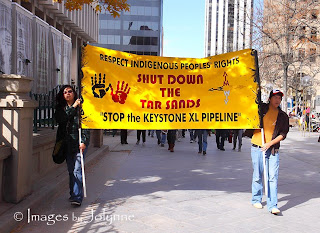 A teach-in was held after the rally and march where Denver Anarchist Black Cross member, Aspen Miller, educated the protesters about the environmental impacts of the pipeline. Tessa McLean from AIM spoke after Aspen about Indigenous rights and the negative impacts on the Indigenous peoples affected by the pipeline and tar sands. She mentioned at least one oil spill has occurred on Indian land and it took six days for Alberta Environment to survey the destruction. That is six days that Indian children, pregnant women and elders spent breathing in toxic fumes from the spill. This is a human rights issue but also an indigenous rights issue and President Obama needs to understand that First Nations people will not be sacrificed for dirty oil and corporate greed. The tar sands are killing a way of life that has existed since time immemorial, the Indigenous ways and cultures need to be fought for, not destroyed by an addiction to oil.

On November 6th, Thomas Poor Bear was in Washington D.C. with the rest of the 10,000 protesters against the pipeline. His Indigenous delegation took the banner we had inside President Obama’s speech, it says, “President Obama: Yes you can, Stop the Keystone XL Pipeline.”  President Obama once said, “It’s time to end the tyranny of oil.” Indigenous peoples are in the front lines against that tyranny. Words are so powerful, when we speak our thoughts we are making promises, let’s hold President Obama accountable to his promises. Indigenous resistance will continue against the pipeline and against the tar sands as long as we’re still here to voice out against them, it has been and will continue to be our nature to resist the genocide that we’ve seen for the past 520 years.