By Clayton Thomas Muller
Indigenous Environmental Network
Posted at Censored News
November 6, 2011
WASHINGTON -- Thousands of citizens from both the United States and Canada representing every background circled the White House today and joined hands to protest the controversial Keystone XL tar sands pipeline. Recently the US State Department signaled that they would not be meeting their self imposed year-end deadline of 2011 to deny or approve the permit of the Transcanada pipeline. President Barack Obama took responsibility for the final decision from Secretary of State Hillary Clinton earlier this week. This came on the heels of the President being confronted at almost every stop across America over the controversial decision. Most recently Vice President of the Oglala Lakota Nation Tom Poorbear confronted President Obama in Denver at a University of Colorado campaign speech.
The United States of America is obligated to honor the 1851 and 1868 Fort Laramie Treaties it made with the Lakota Nation and other indigenous nations. We are extremely concerned about the lack of consultation we have experienced in the dealings of the US State department on the Environmental Impact Review of the project. In his election, President Obama promised a new deal between Native America and the White House, saying no to the Keystone XL is a good place to start,” said Oglala Lakota Nation Vice President Tom Poorbear.
Oglala Lakota Nation grassroots activist Debra White Plume spoke at the rally, “Love for Unci Maka (Grandmother Earth) and our generations are the bedrock of my resistance to the Transcanada oil pipeline. I have come here to be part of this peaceful circle of people to shine a light on President Obama to be visionary and deny a corporate plan whose promise of destruction of our lands is certain. President Obama will be an Earth Warrior, standing in the way of something bad coming toward the people, or he will step aside for Transcanada to foul our water, land, and health for generations to come. It is a decision of global magnitude, all over Unci Maka, we will forever see if he is to shine in the light of love and life, or if he will disappear into the darkness of greed and deceit.”
Cree/Métis Tantoo Cardinal, one of Canada’s most recognized actors added, “It’s not simply poetic to say the earth is alive. I was raised in the Fort McMurray area, the heart of these current tar sands projects. We, all of us, are protectors of the land and water. If you were to see with your own eyes the incredible destruction of our ecosystem, I believe you’d understand that blind greed is destroying our land, water, and way of life. This is why President Obama has the moral imperative to say no to the Keystone XL Pipeline.”
President Obama stated that he would be receiving input from State Department officials for the next several months indicating that the final decision to deny or approve the permit will not be made until early 2012. US based Native Nations in solidarity with First Nations from Canada have sworn to stop the project.
For More information or interviews contact: Clayton Thomas-Muller: Tar Sands Campaigner - Indigenous Environmental Network - cell (613) 297-7515 email: monsterredlight@gmail.com 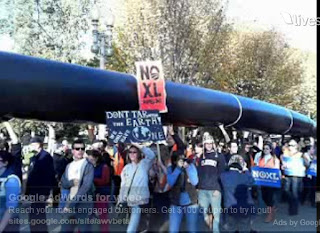 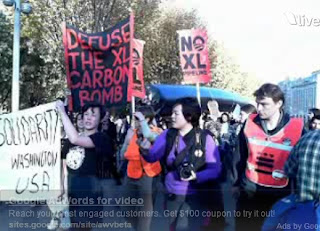 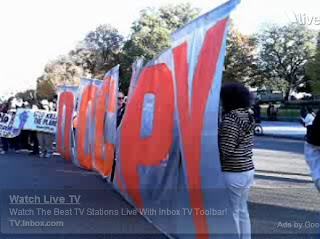 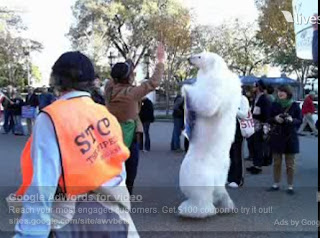