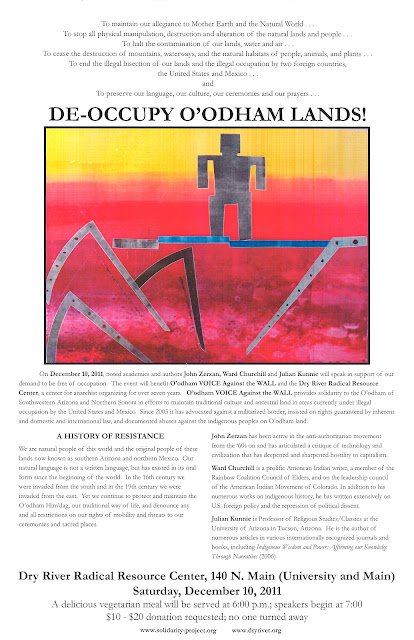 TUCSON -- Noted Writers and Academics to Speak at Benefit For Traditional O’odham Resistance and Anarchist Collective Activist and scholar Ward Churchill, writer and speaker John Zerzan, and Professor of Religious Studies/Classics at the University of Arizona Dr. Julian Kunnie will speak at the Dry River Radical Resource Center on December 10, 2011 at 7:00 p.m. to benefit O’odham VOICE Against the WALL, which since 2003 has organized and advocated for the traditional O’odham leaders and O’odham communities, and the Dry River Collective, a center for anarchist organizing in Tucson for almost seven years.

The event, “De-Occupy O'odham Lands!”, is a reminder that O’odham remain on only a third of their original lands and remain in resistance to the illegal occupation of O’odham lands by the United States and Mexico.
Ward Churchill is a prolific American Indian writer, a member of the Rainbow Coalition Council of Elders, and on the leadership council of the American Indian Movement of Colorado. In addition to his numerous works on indigenous history, he has written extensively on U.S. foreign policy and the repression of political dissent. Five of his more than 20 books have received human rights writing awards. Former Chair of the Ethnic Studies Department, until July 2007 Ward Churchill was a tenured full Professor of American Indian Studies at the University of Colorado/Boulder, where he received numerous awards for his teaching and service. In April 2009 a jury unanimously found that he had been fired by CU in retaliation for his observations on 9/11 and in violation of the First Amendment. Professor Churchill is currently litigating to have that verdict upheld.
John Zerzan has been active in the anti-authoritarian movement from the ‘60s on and has articulated a critique of technology and civilization that has deepened and sharpened hostility to capitalism. In recent years he has been published in the theory journal TELOS, the Detroit publication Fifth Estate, Eugene’s Green Anarchy, and Species Traitor (an anarcho-primitivist journal). His books include Elements of Refusal (1988, 1998), Future Primitive (1994), Against Civilization (1999), Running on Emptiness (2002), Twilight of the Machines (2008), and Origins: A John Zerzan Reader (2010). Future Primitive Revisited will appear in Spring 2012. His weekly Anarchy Radio broadcast streams live on KWVA radio, Eugene. Oregon, USA; past shows are available at www.johnzerzan.net.
Julian Kunnie is a Professor of Religious Studies/Classics at the University of Arizona He is the author of numerous articles in various internationally recognized journals and books. His books include Indigenous Wisdom and Power: Affirming our Knowledge Through Narratives (2006), Is Apartheid Really Dead? Pan Africanist Working Class Cultural Critical Perspectives (2000), and Models of Black Theology; Issues of Class, Culture, and Gender (1994). His forthcoming book is Globalization and Its Victims: Wars Against the Earth and the Impoverished of the World (Rowman and Littefield). He is currently working on a prison research project that interrogates issues of race, class, and gender and is geared toward preventing the incarceration of youth, particularly those of color, entitled Enchained Humanity: A Comparative Study of the Infliction of Incarceration on Persons in United States and South African Prisons.
The event will be held at Dry River, 740 N. Main (University and Main). It is open to the public. A delicious vegetarian meal will be served at 6:00 p.m. and speakers will begin at 7:00.
Donations of $10 to $20 are requested, but no one will be turned away. The Dry River Radical Resource Center is a community space offered by anarchists for live music, free services from clothing to computer access, and fundraising for a wide array of popular causes.
Since 2005 it has hosted musicians, filmmakers, writers and political organizers from all over the world. Run by volunteers, it is sustained entirely by donations.
at November 28, 2011