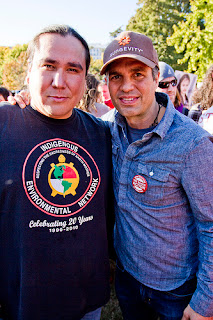 Also in the news today, Navajos on Black Mesa say 'NO!' to Peabody Coal Mine's renewal of a coal mining permit on Black Mesa. Despite decades of fighting the beast that rips out the liver of Mother Earth on Black Mesa, and the decades of tragedy caused by the relocation of Navajos orchestrated by Peabody, coal mining and coal-fired power plants continue on the Navajo Nation, with leases from the Navajo Nation government.
Read more on Censored News Homepage:
http://www.bsnorrell.blogspot.com
Photo by Shadia Fayne Wood/Tar Sands Action: Clayton Thomas Muller of the Indigenous Environmental Network with actor Mark Ruffalo circling the White House on Nov. 6, 2011.