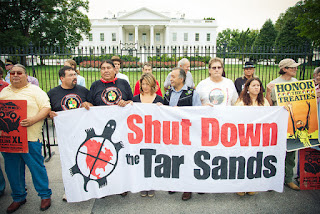 
White House: Office of the Press Secretary November 10, 2011
Statement by the President on the State Department’s Keystone XL Pipeline Announcement
I support the State Department’s announcement today regarding the need to seek additional information about the Keystone XL Pipeline proposal.  Because this permit decision could affect the health and safety of the American people as well as the environment, and because a number of concerns have been raised through a public process, we should take the time to ensure that all questions are properly addressed and all the potential impacts are properly understood.  The final decision should be guided by an open, transparent process that is informed by the best available science and the voices of the American people.  At the same time, my administration will build on the unprecedented progress we’ve made towards strengthening our nation’s energy security, from responsibly expanding domestic oil and gas production to nearly doubling the fuel efficiency of our cars and trucks, to continued progress in the development of a clean energy economy.