Documentary in progress 'Hakela: The Last One' 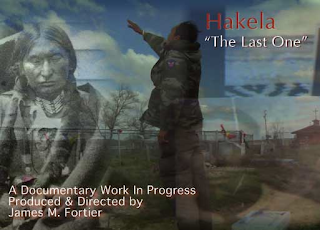 By Calvin Spotted Eagle
Censored News
It isn't often any of us have an opportunity to steer history back on course once it has been driven in circles. Since we began this journey two years ago, meticulous research has been done concerning the claims. As a result, important discoveries were made and one of those discoveries is that there were two "Bigfoots" whose legacies have been merged. One was my grandfather, another was an Oglala man who died AFTER Wounded Knee and is buried in Allen, South Dakota, yet museums, educational institutions and even a memorial to my grandfather, portray the wrong man.
Please support this film and help me bring the truth out. This trip will allow the filmmakers to interview other descendants of survivors of the massacre and key people whose voices have not been heard. It will also allow them to film key events such as the "Bigfoot" Memorial Ride.  Thank you for your support.
Sincerely,
Calvin Spotted Elk


By James Fortier
Hello friends, colleagues, and family,
Just a quick note to let you know that we have 15 days to go to reach our fundraising goal on Kickstarter.com for an essential production trip in late January and editing of a new work in progress sample for my current documentary  Hakela – The last One. We have a long way to go to reach our goal, so please visit our sites, do what you can to support this project and then spread the word with your Facebook friends and email lists. Every little bit helps. Please keep in mind that the way Kickstarter works is that if we do not reach out goal your pledge is not billed and we do not receive any funding. So its all or nothing. Read more about the film below.
James
James M. Fortier
Turtle Island Productions
1148 Dulles Ct
Pacifica, CA 94044
http://www.turtle-island.com
650-738-1834 (WK)
650-219-5668 (Cell)
About the film.
“Hakela: The Last One” chronicles the story of Lakota tribal member Calvin Spotted Elk, the great-great-grandson of the famed Lakota Chief Spotted Elk, erroneously know as “Big Foot,” who, along with over 300members of  his Minneconjou band were massacred at a place calledWounded Knee Creek in December, 1890.
This is the story of Calvin Spotted Elk’s struggle to restore his family name, correct the historical record, fulfill his promise to his dying father, honor the memory of his brother, and take his rightful place as the last direct male blood descendant of the famed Lakota ChiefSpotted Elk, aka, “Big Foot.”
The film follows Calvin Spotted Elk in his quest to legally regain hisfamily name and then use Federal Law, the Native American GravesProtection and Repatriation Act, NAGPRA, to demand the return of Chief Spotted Elk's sacred ceremonial pipe which was stolen from his frozenbody, and today sits in a museum in Barre, MA
Support a great project and every pledge gets a reward. Pledges at the$25 level and higher get a great T-Shirt designed by Calvin Spotted Elk.
Pass it on!
Miigwetch and Pilamaya (Thank You)
Kickstarter project link:
http://www.kickstarter.com/projects/353859867/hakela-the-last-one?ref=category
at November 22, 2011